Water – from source to tap 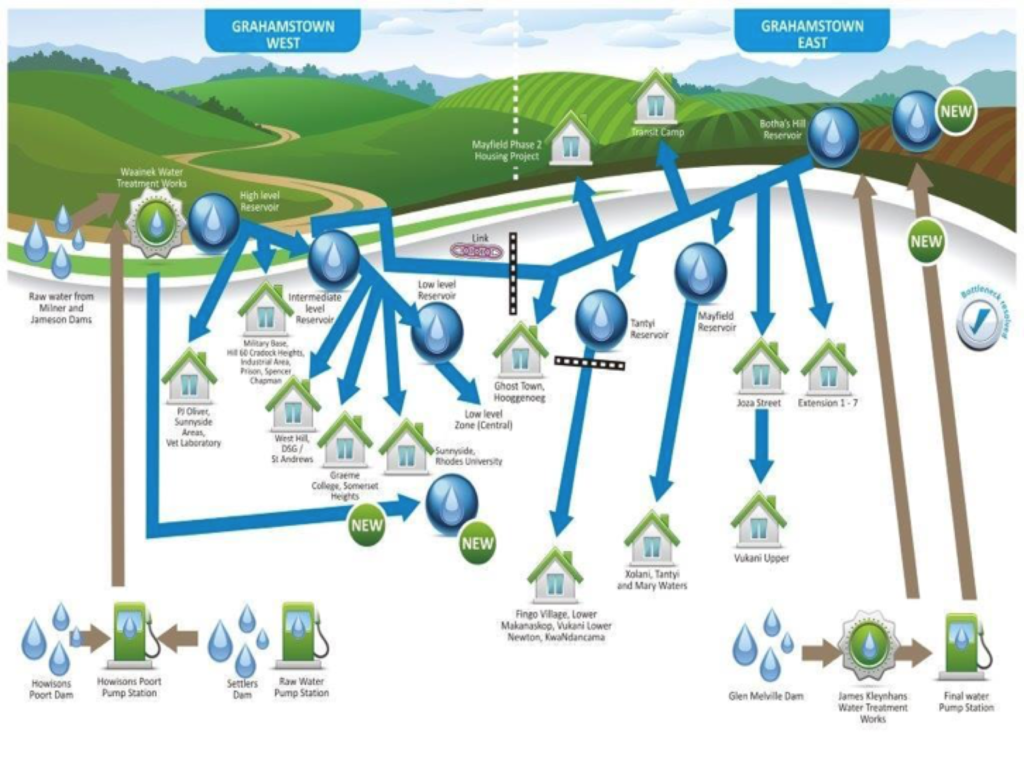 This explanation by Matthew Weaver of the relationship between the catchment and our water supply was first published as part of a supplement focusing on conserving our water in March 2018. We republish it now to help our readers understand why, despite the welcome rain we have experienced in Makhanda (Grahamstown) in the past week, our supply dams remain low.

What is a catchment?

A catchment is all land where water falls and flows downhill, draining into a river or stream. Everyone lives in a catchment.

Eastern supply system draws water from the Orange-Fish River Inter Basin Transfer Scheme. This water has a long journey, starting at the Katse Dam in the highland mountains of Lesotho, then down the Orange River which flows into the Gariep Dam in the Free State, from there water is diverted through a long tunnel into the Fish River which is diverted to a weir and another tunnel to the Glen Melville Dam north-east of Grahamstown.

Raw water at Glen Melville Dam is treated at the James Kleynhans Water Treatment Works from whence it is pumped up to the two Botha’s Hill reservoirs. From Botha’s Hill the water gravitates through the pipe network and two lower level reservoirs (Mayfield and Tantyi reservoirs) to all the taps in the eastern half of Grahamstown. The Glen Melville water system is owned by the Department of Water and Sanitation and therefore the Municipality has to pay for it.

Although we have seemingly had a lot of rain in Grahamstown this is of no help to the town’s water supply, as it all falls in town and flows down the Bloukrans River (Amatyana) to Port Alfred.

The western supply system relies exclusively on rain falling into catchments above four local dams. Jamieson and Milner Dams, two very small dams (about 12% of the total western supply) at the top of the New Year’s River catchment, are unreliable during drought and can contribute about 1ML/day. Settlers and Howieson’s Poort Dams are situated in the Kariega River catchment and are the main supply dams feeding Grahamstown West and the town centre, supplying 77% and 11% of the total western supply system respectively. Water is pumped from Settlers to Howieson’s Poort Dam and then up to Waainek Water Treatment Works for purification before being released via gravity through the pipe reticulation and lower level reservoirs to the taps in the western half of Grahamstown.

The Western Supply System is owned by the Makana Local Municipality. While for the municipality the water is free, they still have to pay for the electricity, chemicals and staff for pumping and purifying the water. So, although we have seemingly had a lot of rain in Grahamstown this is of no help to the town’s water supply, as it all falls in town and flows down the Bloukrans River (Amatyana) to Port Alfred. We need rain to fall in the catchments above our dams. Not enough rain has been falling into the Kariega River catchment for it to even start flowing.

There is a link between the western and eastern supply systems allowing water to be transferred up to the intermediate level in the west. To a small extent, underground water pumped from boreholes supplements surface water obtained from the two supply systems.