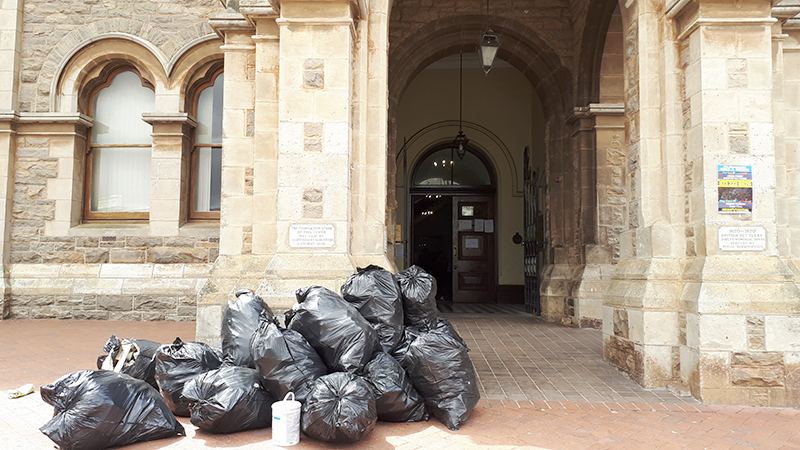 Rubbish left in frustration outside the city hall on Friday 25 January, following weeks of poor or no services to residents and businesses. Makana Municipality has asked residents not to put their rubbish out for collection, while they address industrial action by Makana staff. Photo: Sue Maclennan

Makana Municipality is in the grip of a “silent strike” with Water and Sanitation workers Friday 1 February set to join the industrial action. This comes as the city is managing a serious water crisis and hundreds of first-year students arrive with their parents to register at Rhodes University.

As the Minister of Water and Sanitation this week unlocked millions to speed upgrades to the city’s water infrastructure and help manage its supply, South African Municipal Workers Union shop steward Wandile Duruwe told Grocott’s Mail the city’s plumbers would from today join staff in Cleansing, Parks and Electricity  who have been arriving at work but withholding their services until proper protective clothing and tools of trade are provided. Duruwe appealed to residents to be understanding.

Rubbish lies piled up across the city after a second week without refuse collection. Bags remain on the streets, only to be ripped apart by stray animals and their contents strewn across streets. In the dark about the strike, residents expressed their frustration on social media networks. Some have taken on the job of cleaning up themselves.

Two municipal electricians are stretched as they attend to urgent repairs and maintenance for the city’s essential infrastructure, including the water treatment works.

As education institutions embark on the academic year, the fast-dwindling local water supply is being addressed by a joint operations committee who must communicate clearly the crisis to residents and implement plans to secure water. In around two weeks, the water supply west of the city will be too low to pump and the 10 megalitres produced by the James Kleynhans Water Treatment Works, supplied by the Orange/ Fish River scheme, will be rationed to serve all the city’s residents, businesses and institutions. The current supply is 18ML from both sources.

Adding to concern about water management is that funds to pay private engineering company MBB Consultants have finished. The company posted this week on its Facebook page: “Note that MBB won’t be able to assist with water leaks / burst pipes as the project funds have been depleted. All water leaks / burst pipes are to be reported directly to Makana Municipality Tel: 046 603 6069. MBB would like to thank everyone for their cooperation during the project implementation phase.”

In addition, rampant sewage spills caused by blocked pipes led an expert to warn officials at the end of last year that an outbreak of waterborne disease was imminent.

A municipal bid adjudication committee meeting scheduled for Tuesday 29 January was key to resolving industrial action by staff in the cleansing department. However, today Duruwe said, “The action will continue. There is nothing from the employer. They couldn’t tell us when the protective clothing and equipment would arrive. So we will continue to come to work and wait until it arrives.”

All departments had joined the action, Duruwe said. “It’s only the office-bound staff in Corporate Services and Finance who are not part of it.”

Municipal Manager Moppo Mene on Tuesday told Grocott’s Mail the bid adjudication for the protective clothing tender would be that afternoon; however, Makana’s poor payment record meant service providers required payment upfront and money would have to be found.

Duruwe said staff are residents too, and aren’t happy about the mess on the city’s streets.  “But what choice do we have? Please understand our situation. We are not ‘lazy’ – which is how residents keep referring to us. Protective clothing is not something we should have to fight for.”

Yesterday Makana apologised to residents in a statement on its Facebook page.

“The municipality is attending to labour related issues in the electricity and cleansing sections. Service delivery in these departments is adversely affected. The municipality appeals to all residents to be patient while these issues are being attended to. Residents are urged not to put garbage bags out on the street for collection. We will issue updates as they become available. We apologise for the inconvenience.”

Visit www.makana.gov.za/water-crisis/ for details of the water crisis plan.