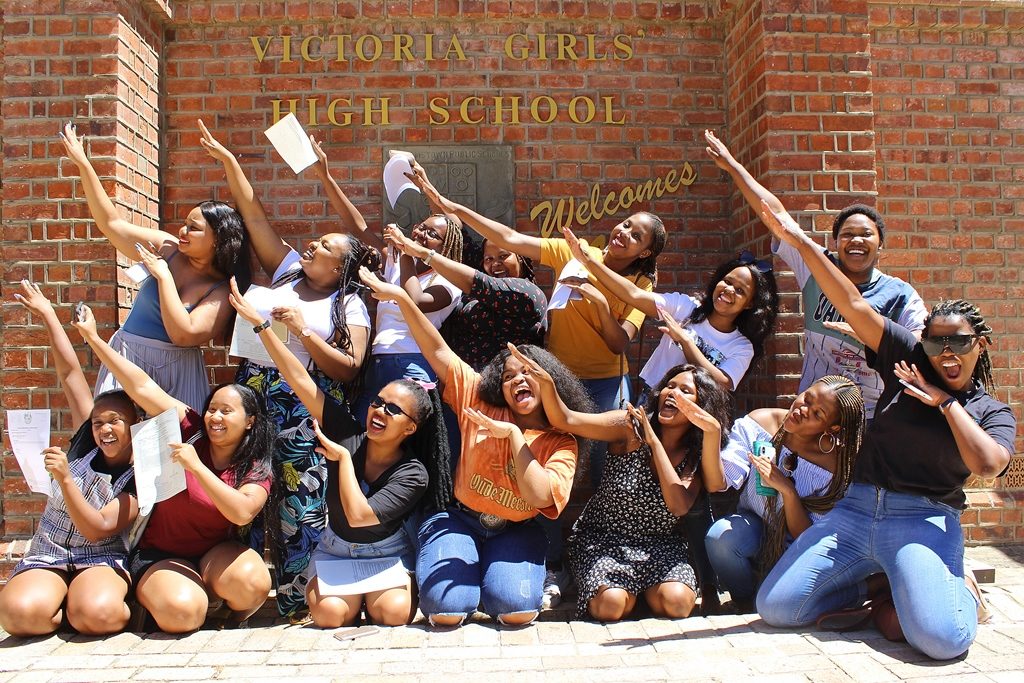 By SUE MACLENNAN and AZLAN MAKALIMA

“We are grateful that we have a learner who is a top achiever and that our results are amazing,” Ntsika Secondary School principal Madeleine Schoeman told Grocott’s Mail as excited matrics flocked to the school to collect their results on Friday 4 January.

Victoria Girls’ High remained the top school in the district with a 100% pass rate, closely followed by Graeme College at 96.87%, then Ntsika Secondary (84.94) in the 2018 National Senior Certificate exams. With the biggest Matric 2018 class among local public schools (127 resulted), at 101, Nombulelo Secondary School also had the highest number of total achieved (i.e. those who passed). Gadra Matric School retained its 100% pass rate, with 101 of the 173 students enrolled obtaining Bachelor level passes.

Ntsika is one of Makhanda’s (Grahamstown’s) HDIs that has thrived on strong support from a Rhodes University/ Gadra partnership that offers mentoring for learners, and leadership training for senior staff.

“The quality of the results have improved a lot – it is so much better than last year,” said Schoeman. The school is down from its 2016 zenith of 87.14% and last year’s 85.33%, but Schoeman is focused on quality.

“We are proud of the number of bachelors and diplomas passes we have. The pass percentage is not quite the same but it is still fine.”

Of 93 who wrote, 36 achieved Bachelor passes, meaning they are eligible to apply for admission to university, 27 achieved Diploma passes and 16 a higher certificate.

Support from Rhodes and Gadra Education

Support and attitude are to thank for Mary Waters Secondary School’s continued rise out of the matric doldrums to improve their pass rate by 16.22%, says Principal Faith Coetzee.

Glowing with pride on Friday 4 January as pupils came into the offices to collect their results, Coetzee told Grocott’s Mail, “We have had so much support for our learners and our teachers from the Rhodes/ Gadra mentoring programme, the Rhodes Education Department and the District Department of Education. That, along with the hard work of our teachers, and supportive parents has helped  these learners achieve their goals. Their hard work has been rewarded.”

Coetzee has high praise for her teaching staff.

“They have a very positive attitude – they’re open to learning and support. We are all very aware that it’s not about us, it’s about the children.”

Coetzee said Gadra Education Manager Ashley Westaway had been a great source of strength and advice, and the Rhodes University/ Gadra Education Nine Tenths mentoring initiative, along with other support programmes by the Rhodes/ Gadra partnership had played a big role in the school’s improved results.

The recognition that matric is not just about the Grade 12 year, and extending the mentorship programmes to begin in Grade 8, was also significant, Coetzee said.

“According to our projections, we had a target of 77% and we are slightly disappointed,” said Radio Mcuba. “We are grateful still because we have more bachelors than we had last year – four in Maths and Science and one bachelor in history.

“The district gave us a target of 60% and we reached 50%. We have high hopes for this year – we will do even better,” Mcuba said.

“I’m very satisfied with the performance of the 2018 class, they have maintained the school’s long-standing tradition of the 100% pass rate, and, more importantly, the over 90% Bachelor’s pass rate,” Principal Warren Schmidt said. “They have given the class of 2019 a worthy benchmark to aim for, and hopefully exceed. Thank you to all the pupils, parents, staff of the school for their efforts in keeping VG the top performing public school in the area.”

“Graeme College is very proud of the class of 2018,” said deputy principal Greg von Molendorff. Top achiever in the District Tashin Patrick, Daniel-Keagan Hockly and Tadiwa Mafuma were the three A aggregates, among those making up the 67 subject As in Graeme College’s class of 2018.

“We are very proud to have a 97% pass rate for 2018, with a 72% Bachelor pass rate. It is pleasing to have 99% of the candidates who passed receive either a bachelor or diploma pass,” said Von Molendorff.

“For the past few years, GMS has specifically focused on enabling its students obtain good quality results. It is thus very pleasing that GMS has again, for the 4th consecutive year, assisted over 100 of its students to obtain a Bachelor level pass,” Westaway said. “This strong performance in the final examinations confirms that GMS will remain the biggest feeder school for Rhodes University in 2019. Gadra Education is committed to assisting Dr Mabizela (the university’s Vice-Chancellor) in his bid to make the university more accessible to local youth, and GMS is a key institution in this regard.”

This was the third consecutive year that GMS had maintained a 100% pass rate.

“As far as individual subjects are concerned, highlights were an average improvement of 13% in Physical Sciences and of 11% in Accounting. These are strategic subjects in relation to the science and commerce fields respectively,” Westaway said.

Of the local schools in the Grahamstown Cluster Management Centre, PJ Olivier and Mary Waters followed Ntsika at 83.33% and 82.25% respectively. Grahamstown (Makhanda’s) Nombulelo Secondary had a 79.52% pass rate.

“I’m moderately satisfied with the 2018 results,” said Principal Joubert Retief. “Our Bachelor Pass rate of 53.3% and the fact that there are more subjects with learners receiving subject As indicate that the standard of teaching and learning is on par with what is required.

“Congratulations to the teachers and learners that used every opportunity and reaped the benefits of their efforts. There is no replacement for hard work to achieve success and I hope that the class of 2019 will raise the bar. Thanks to all the parents who supported their children throughout.”

Joy with strong results at Nombulelo Secondary School was tempered by the sorrow of the loss of Zikhona Ndokweni, a Grade 12 learner who passed away in Peddie on Friday 29 December and was buried in Riebeeck East on Thursday 3 January.

“ Though we don’t know the full details of her passing, we do know that Zikhona had been battling cancer for a number of years,” said Principal Nicci Hayes. “She received a special award at our prize-giving for her dedication, conscientious attendance of school and cheerfulness, despite extremely challenging personal circumstances.  Zikhona had signed up to assist with the skills course the school will be introducing this year.  She will be sorely missed by the staff and by her peers.”

Despite a slight drop in the overall pass rate percentage, Hayes was delighted what the learners had achieved.

“We are particularly proud of Mihlali Breakfast, who has led the way academically throughout the year,” Hayes said. Breakfast achieved two As and three Bs.

“We are pleased to have maintained a fairly strong matric pass rate this year,” Hayes said.

“Despite our overall percentage being slightly down on last year [from 82% to 79.52%], we are happy that the number of learners passing has increased but also that our “strong passes” i.e. Bachelor and Diploma passes [34 Bachelor passes and 46 Diploma passes] have improved compared to last year,” Hayes said.

“Credit to our staff, the learners (especially those who formed study groups and worked late into the night at school revising) and our whole support network including staff from the district office, iKamva, GADRA, Rhodes and all the other individuals and organisations that give so much to bolster our learners during their most critical year.”

Nathaniel Nyaluza saw a catastrophic plunge by 23.28%, with less than a quarter of the 67-strong class of 2018 passing. Just over a third of TEM Mrwetyana’s 55 candidates passed.

The Eastern Cape Department of Education’s Grahamstown Cluster Management Centre (CMC), as the old Grahamstown District, now under the Sarah Baartman District, includes schools in the Ndlambe and Makana Municipalities. Other CMCs in the District are Humansdorp and Graaff Reinet. The Grahamstown CMC improved on its 2017 results of 64% to 74% in 2018.  By comparison, the Graaff Reinet CMC had a 62.83% pass and Humansdorp 68.46% in 2018.

The Sarah Baartman District had the second-best pass rate among the Eastern Cape’s 12 Education Districts, at 73.1% – only slightly behind Nelson Mandela Bay and ahead of Buffalo City.

District Director in the Department of Education, Nkosinathi Godlo, was delighted at how well the Sarah Baartman schools had done.**

Of those in the District who had passed, 27% had Bachelor passes

“I’m very happy that our schools that are doing well,” he said.

Asked how the improvement had come about, Godlo said, “It’s the interventions we are making at schools through extra support – closing content gaps and organising extra classes on Saturdays.”

Functional schools with strong leadership had been crucial, as had partner organisations.

“The work NGOs are doing is commendable,” Godlo said. “They assisted us a lot.”

The worst pass rate in the Eastern Cape (55.6%) was in Amathole West which incorporates Nxuba, Nkonkobe, Amahlathi and Ngqushwa local municipalities.

Grocott’s Mail will publish Gadra Education Manager Ashley Westaway’s detailed analysis of local results online in the coming week. Our first print edition of the year is on Friday 11 January.

STEVEN LANG, SUE MACLENNAN AND AZLAN MAKALIMA WERE OUT AND ABOUT ON RESULTS DAY 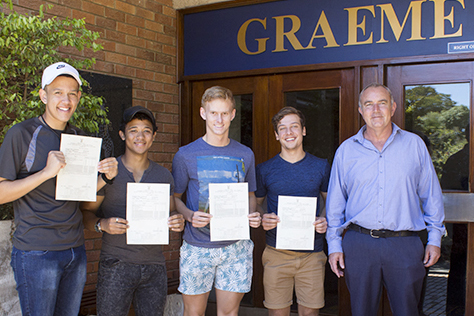 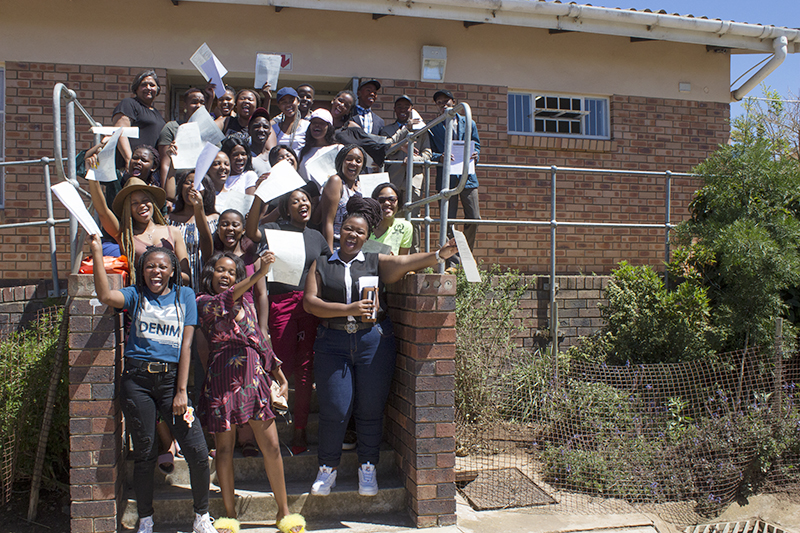 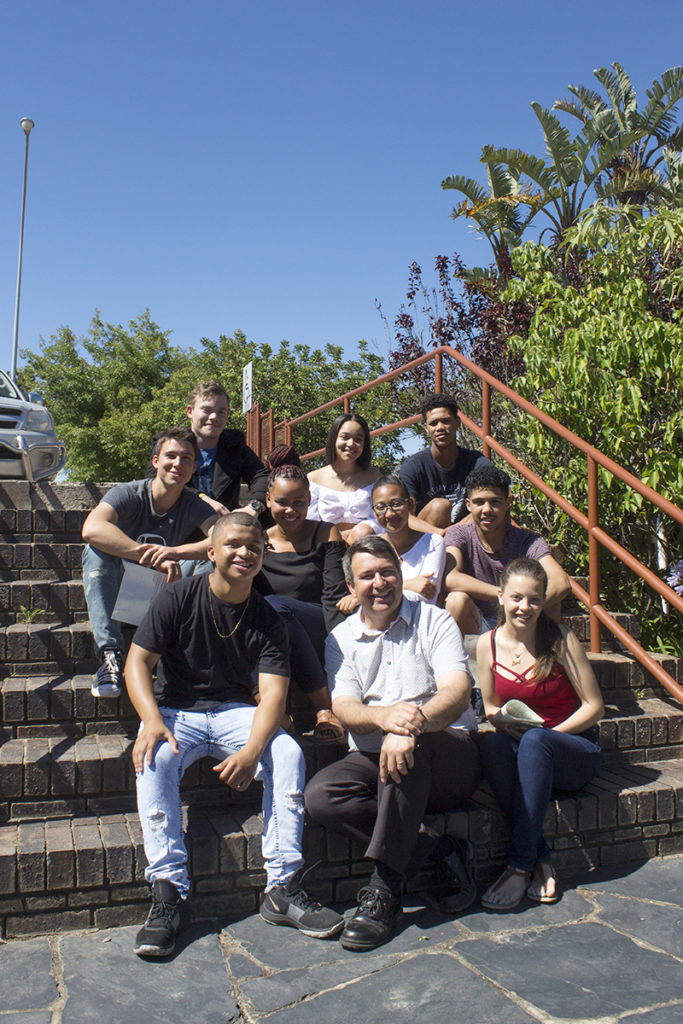 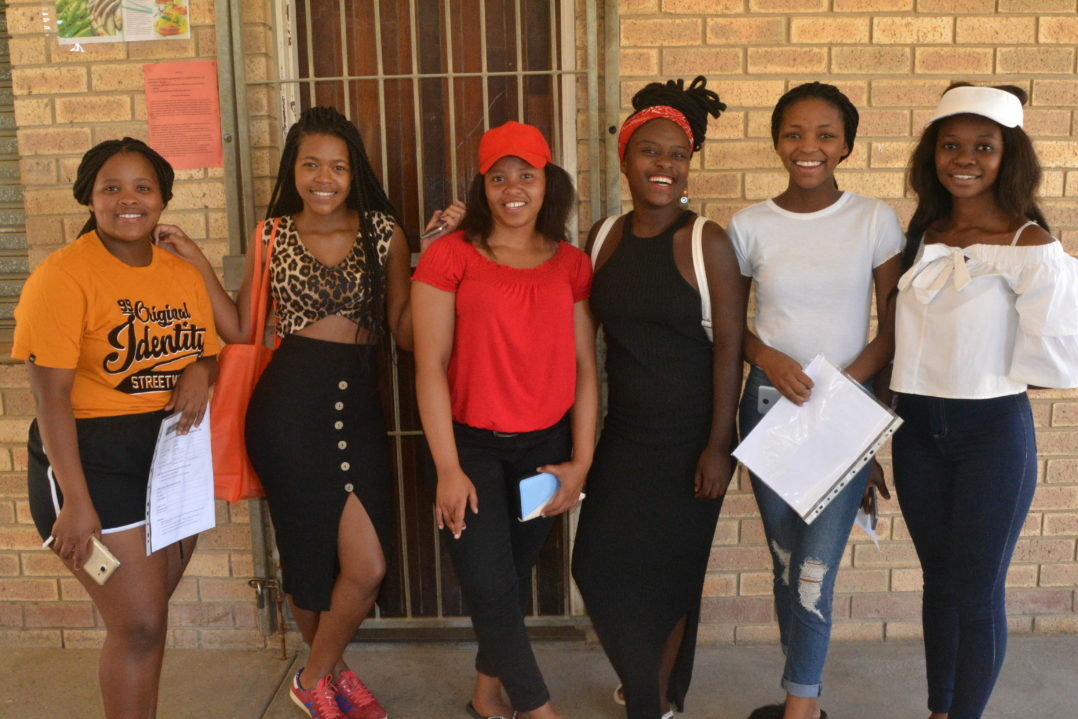 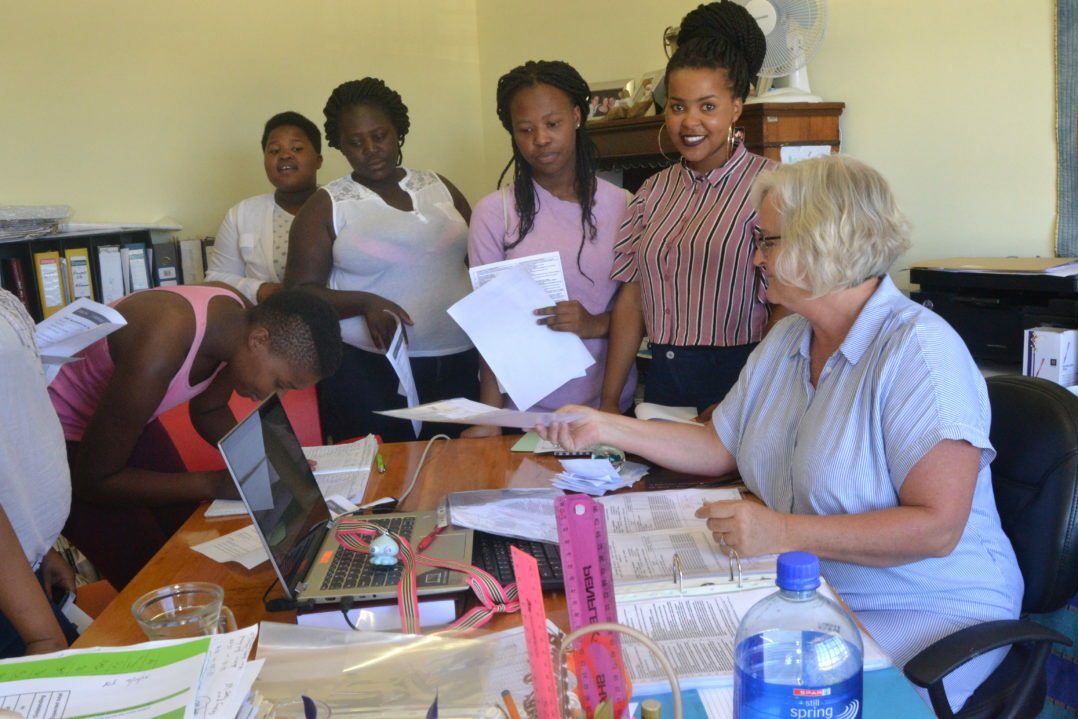 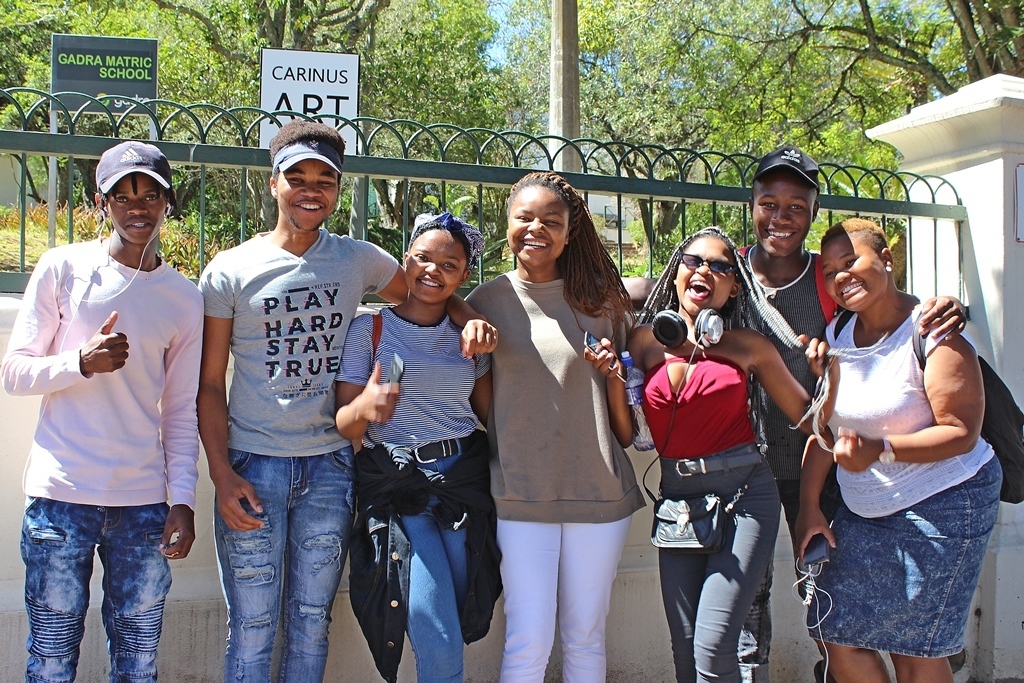 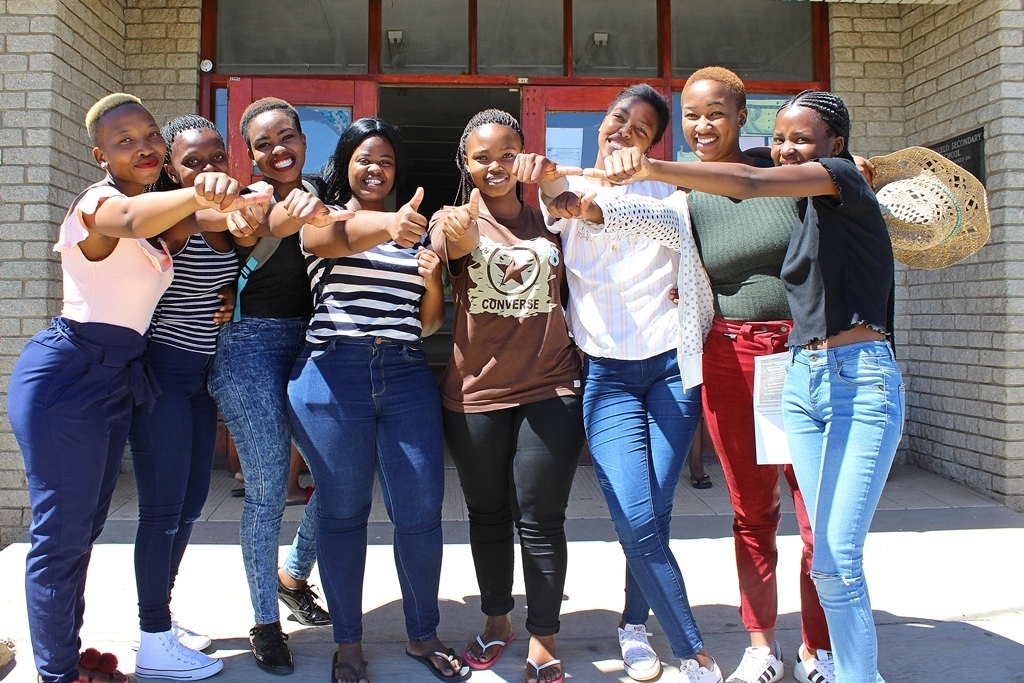 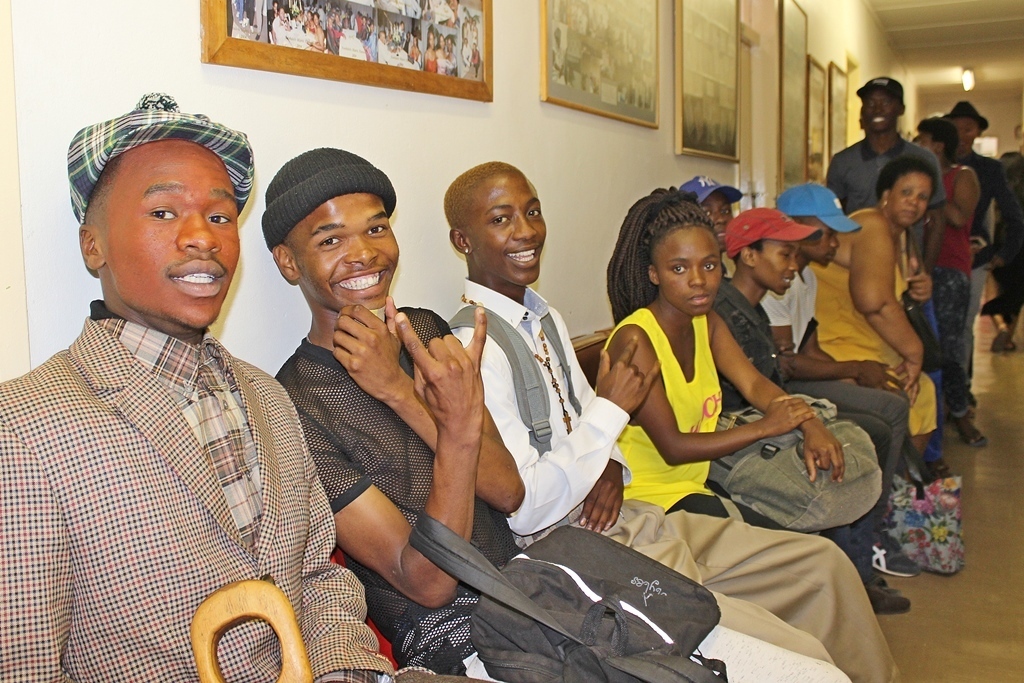 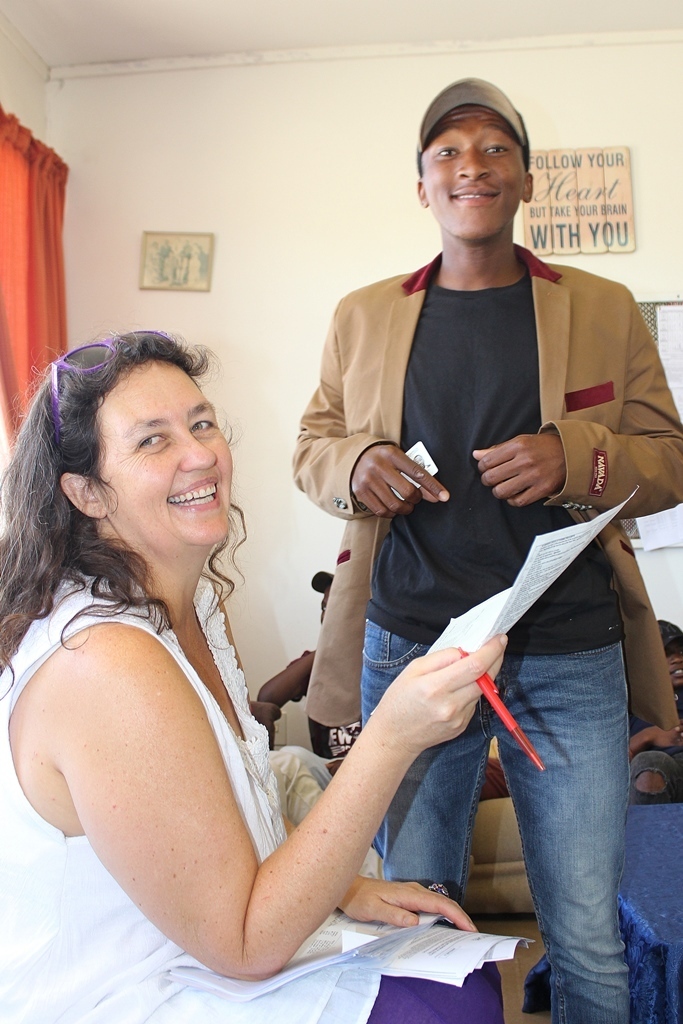 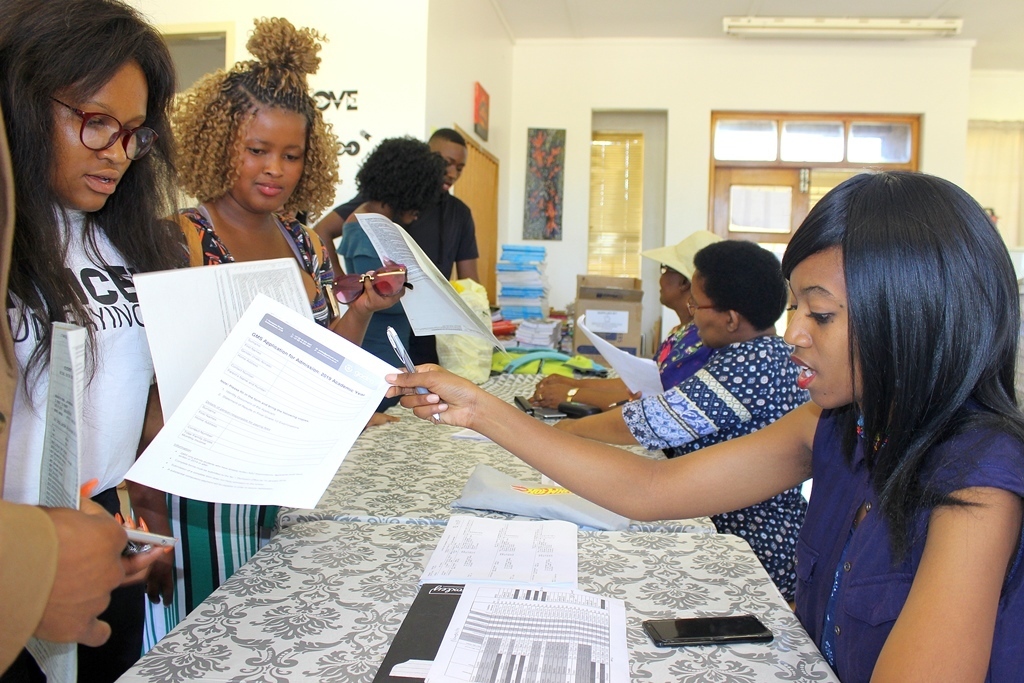 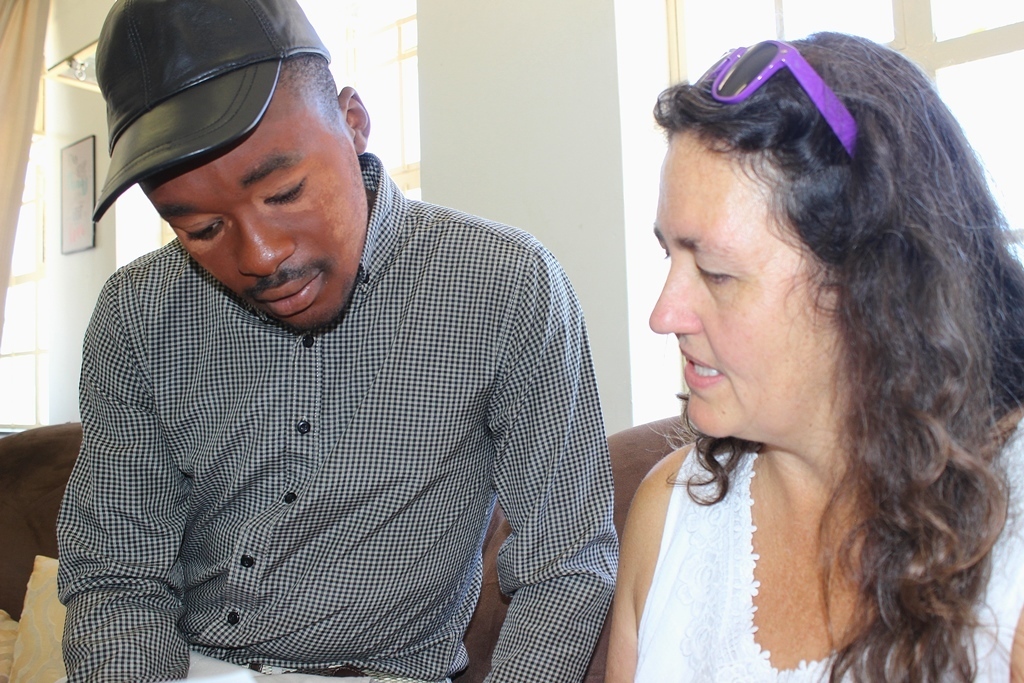 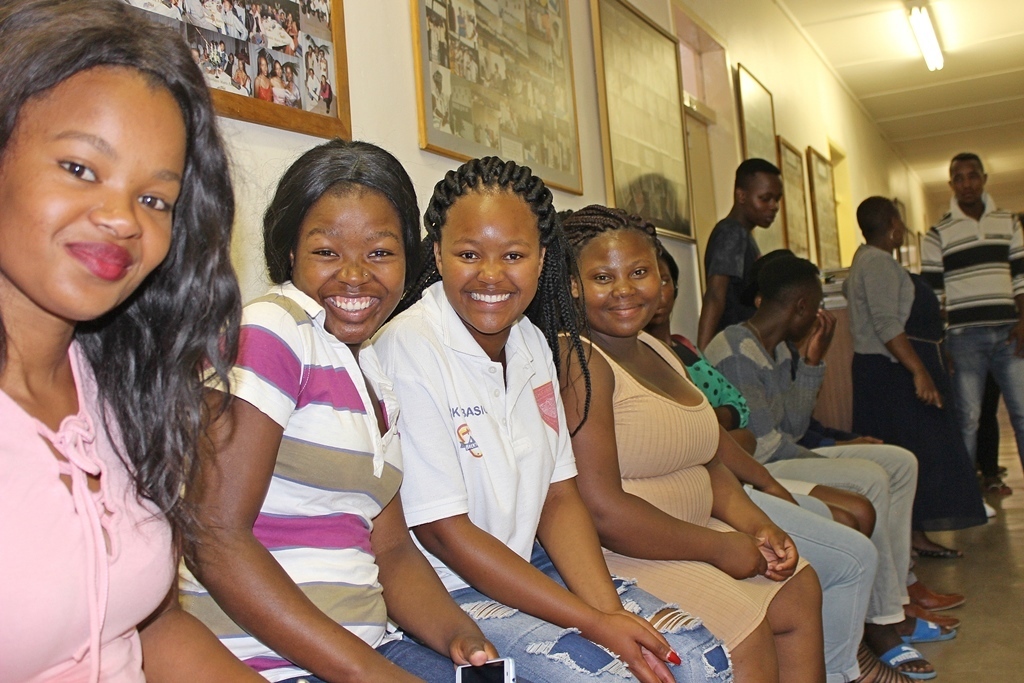 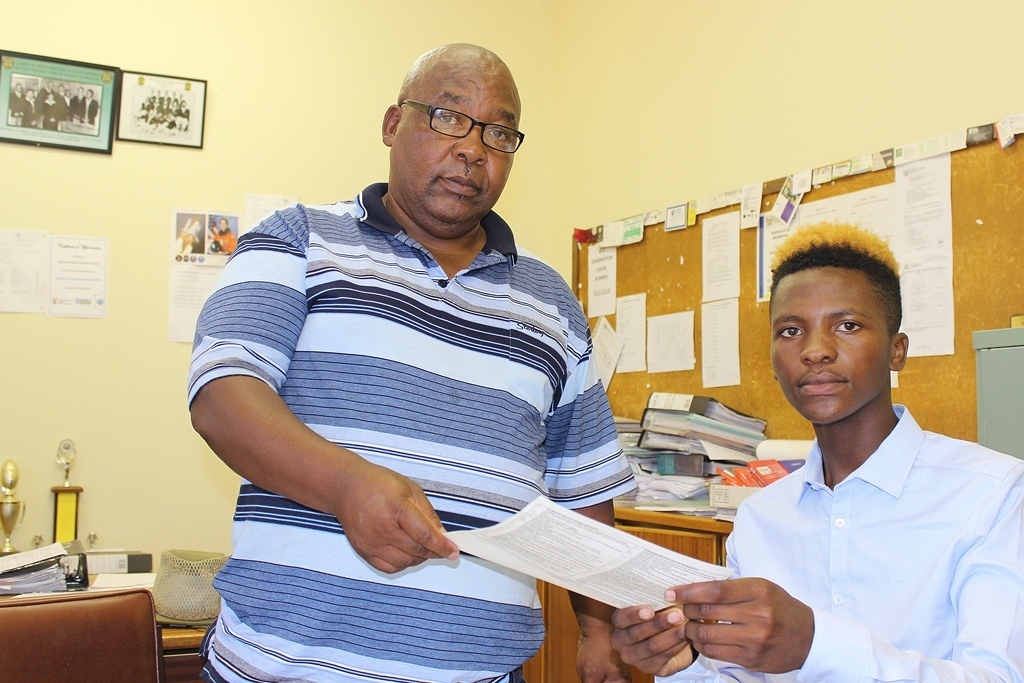 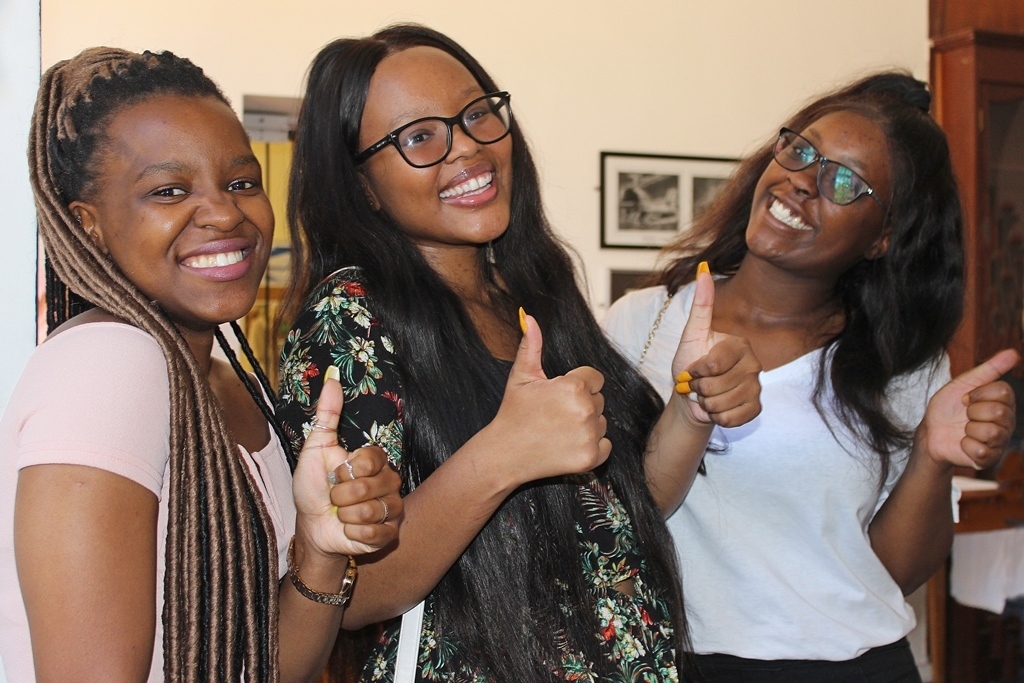 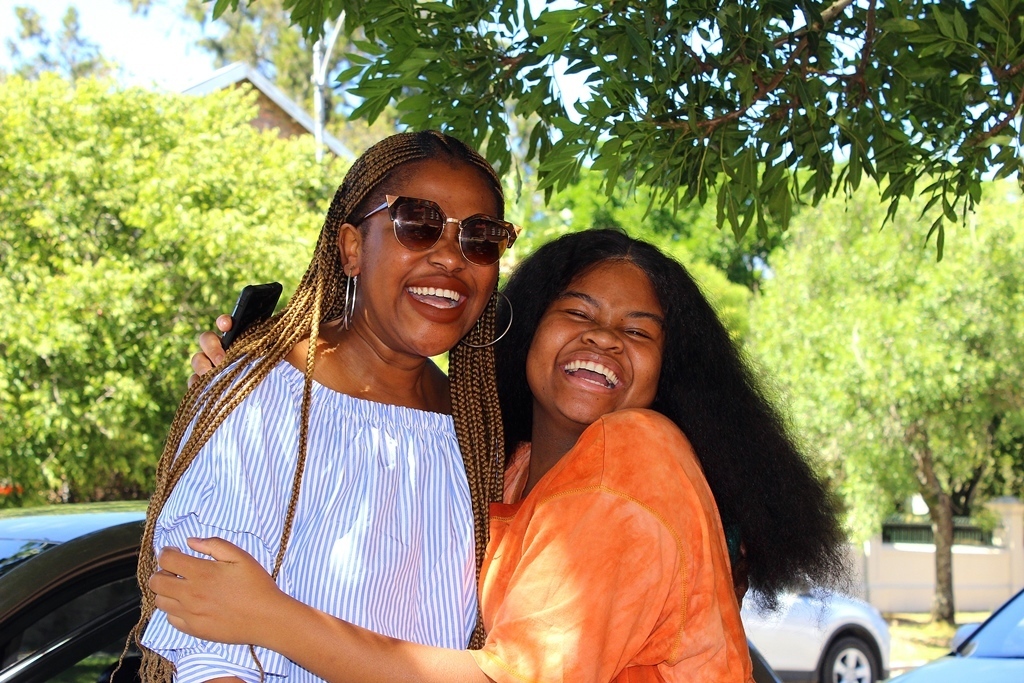 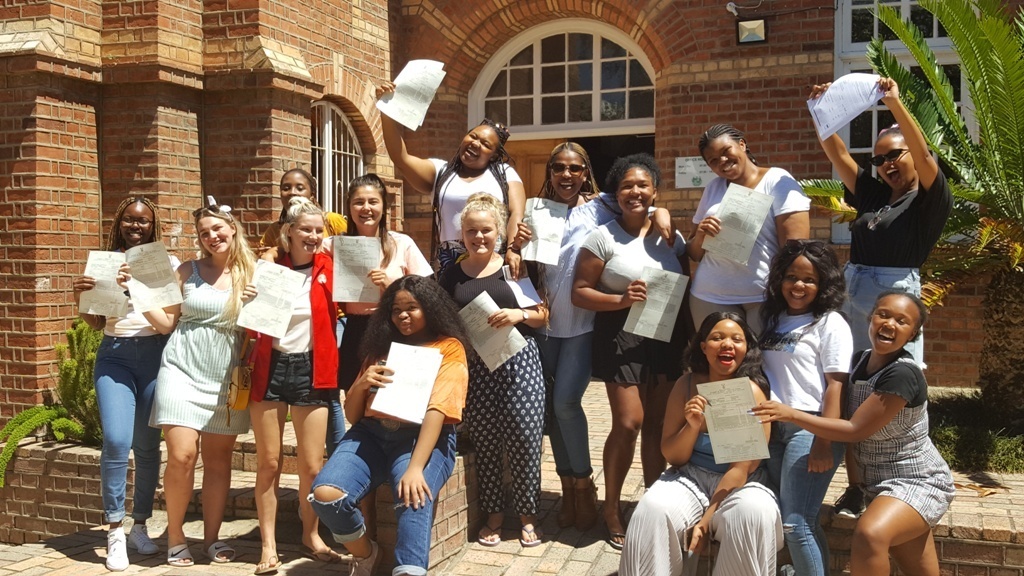 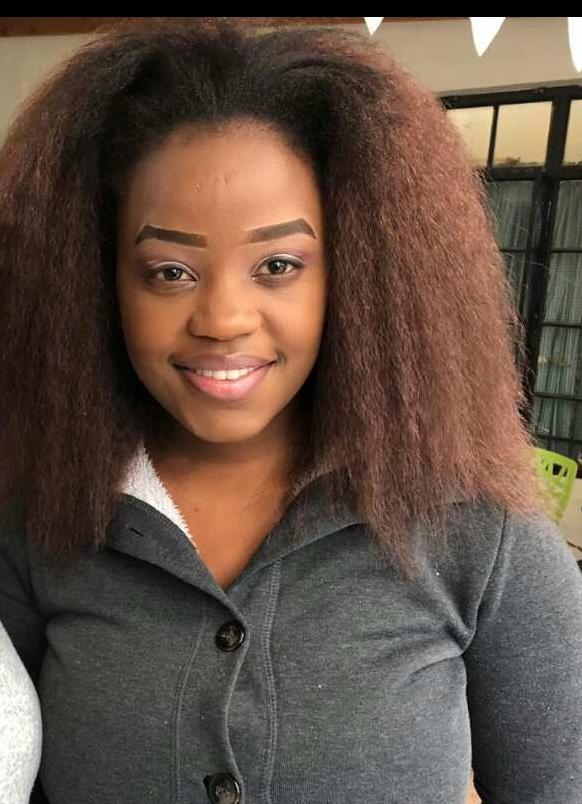 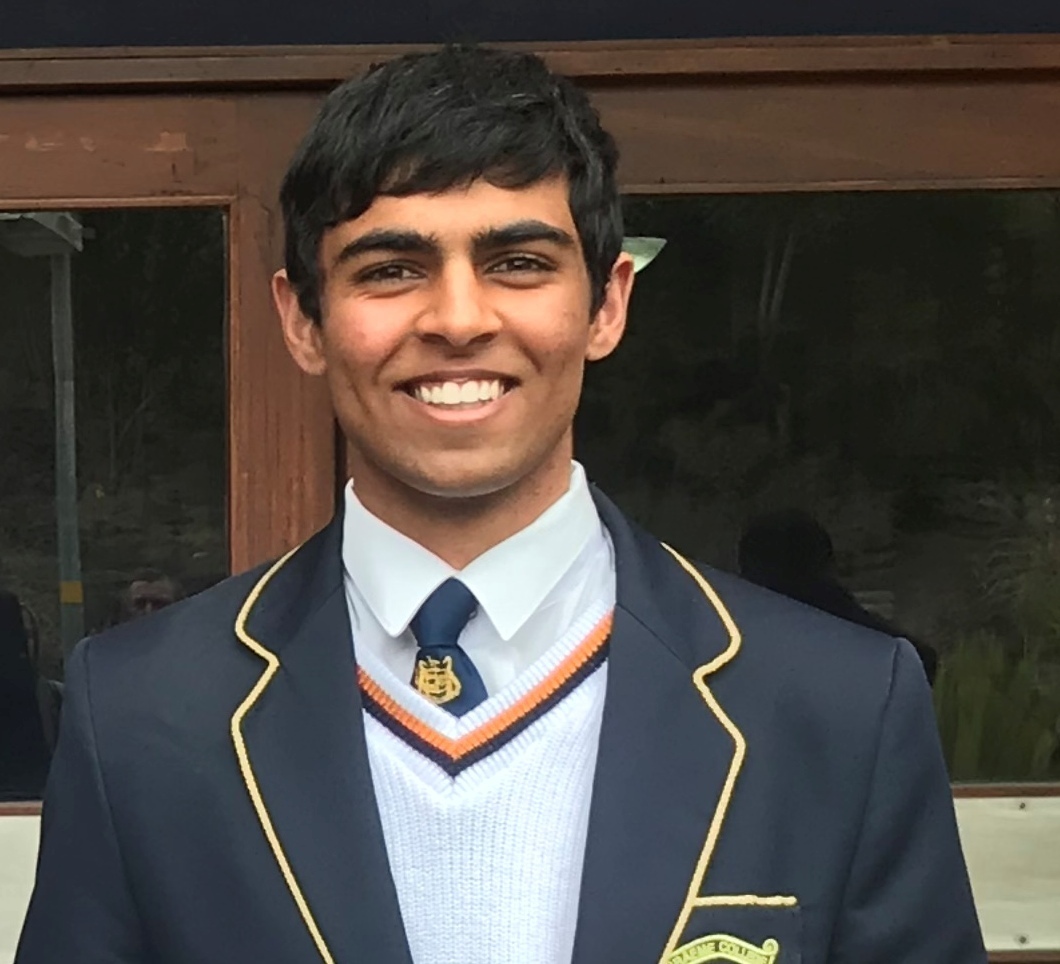