Mission to save Makana is on says Mabuyane 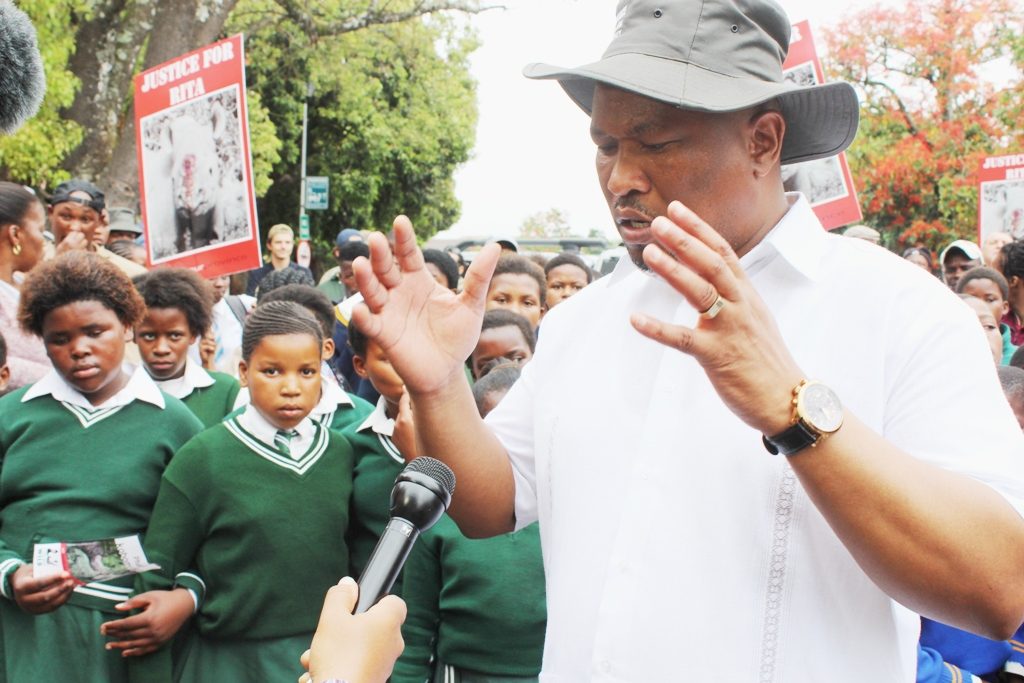 Provincial Chairperson Oscar Mabuyane says they need national and provincial government working together to ensure that we capacitate Makana Municipality. Here he speaks outside the High Court in Makhanda (Grahamstown) during an anti-rhino-poaching protest marchon 26 November. Photo: Sue Maclennan

Monday 26 November was the day ANC Provincial Executive Council Chairperson Oscar Mabuyane was expected to announce a reshuffle of Makana Municipality’s political leadership. Rumours of a palace revolution followed a march last month, where residents delivered a petition of more than 21 000 signatures calling for the Section 139 (1) (c) dissolution of the Makana Council.

Mabuyane, as MEC for Economic Development and Tourism, led a march to show support for rangers, private reserve owners and anti-rhino-poaching activists. There, Grocott’s Mail questioned him on rumours that his presence in Makhanda could herald political changes.

Mabuyane confirmed the PEC was aware of the call for the dissolution of the Council, following citizens’ dissatisfaction with service delivery and administration in Makana.

“Well we are aware of what is [happening]here and we are going to arrest it as soon as possible. Indeed, we can’t blame people who are complaining, especially those [who should be receiving]services here.

“If the centre can’t hold, then a shift definitely. The governing party must look at that seriously because its about human beings who stay here.”

Mabuyane confirmed he was due to meet the leadership of the protest groups later, “to hear them out”.

He said there was an internal process within the organisation.

“Soon we are going to return and find away to resolve the kind of problem that we have here. We are in pursuit of a relevant [remedy]to correct the situation. It’s not an easy thing, I must say. We need national and provincial government working together to ensure that we capacitate this space.

”This is an international town by virtue of having an institution of Rhodes University’s calibre. So  it’s important that we don’t just treat [the  municipality] like any other institution. We can’t allow the thing that is going on here to continue unabated.

“We are attending to that. We have seen the memorandum, the complaints. They are justifiable and need to be attended to.”

As to whether there would be a reshuffle of the ANC’s local leadership, Mabuyane remained tight-lipped.

“That’s an internal organisation process. If it’s not broken, don’t fix it. But if it’s broken, we definitely need to fix it.

“I’ll leave it there because I don’t want to engage in speculation. Politics are not like economics – you can’t live on speculation. But there is something we are doing to find a solution to the problem.”

Commenting on the group’s engagement with Mabuyane, Lankester said, “I thought it was a very necessary and constructive dialogue. As a business community we wanted to emphasise to him that there are people passionate about our City and who want to help…. and to be solutions oriented.

“I think we achieved that, and he committed to working with us to help rescue the City.”