Inflation surprises on the downside in October 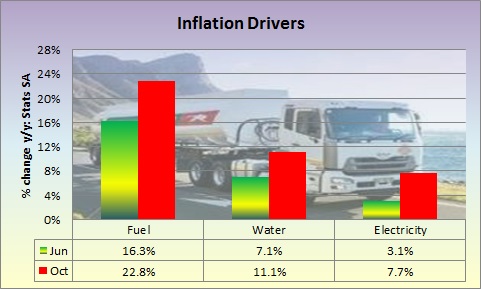 The October inflation data surprised economists on the downside as the actual result was a 5.1% year-on-year (y/y) increase compared with an IRESS-compiled consensus forecast of 5.2% y/y and the August and September rate of 4.9% y/y. The good news for Grahamstown residents is that the Eastern Cape inflation rate was below the national average at 4.9% y/y.

It was rich carnivores that kept inflation elevated in the second half of 2017 as meat inflation was in double-digit increase territory even though the rate moderated to 14.0% y/y in December from 14.9% y/y in November, 15.5% y/y in October and 15.6% y/y in September. The richer you are, the more meat you consume. Meat inflation is moderating in 2018 and eased to only 4.0% y/y in October from 11.4% y/y in February.

The weaker rand and higher international oil prices after the US withdrew from the multinational Iran nuclear agreement resulted in a rise in fuel costs to 25.3% y/y in July from 16.3% y/y in June, but this eased to 22.8% y/y in October. The recent strength in the rand and a 20% drop in the international oil price since the start of October meant that we could get a R1.80 per litre cut in the retail petrol price in December.  The over-recovery in the basic fuel price, which determines how much the retail price will be cut, was R1.97 per litre on November 20. The basic fuel price has tumbled from R8.70 per litre on October 4 to R6.30 per litre on November 20.