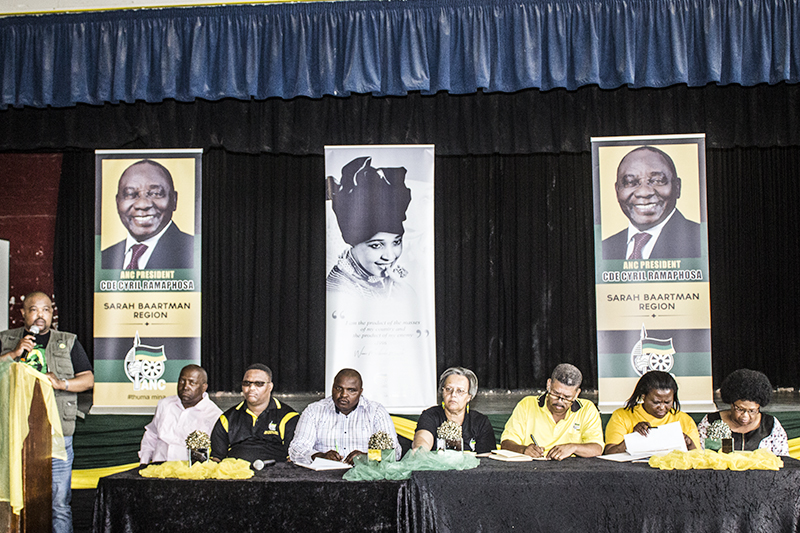 Provincial Chairperson Oscar Mabuyane and members of the Regional Working Committee will meet with ANC councillors in Makhanda (Grahamstown) on Monday 19 November, according to REC secretary Johannes Hobbs. However, regional and local leadership have remained tight-lipped about a possible palace revolution.

Rumours of a reshuffle of Council’s Executive following a particularly bad week for the party’s Makana Subregion were part of the build-up to Wednesday’s general membership imbizo at BB Zondani Hall in Fingo.

The top-three executive of the ANC-led Council comprises Nomhle Gaga (Executive Mayor), Yandiswa Vara (Speaker) and Mahbuti Matyumza (Chief Whip). Factions within Makana’s 17-member ANC caucus have been on either side of the NDZ/ CR fault line, with some councillors serving their second term perceived as being aligned to the former, and so linked to the (former president Jacob) Zuma legacy.

Makana Subregion Chairperson Mabhuti Matyumza instructed the media (Grocott’s Mail and Dispatch) to leave the BB Zondani meeting on Wednesday afternoon, saying it was a closed ANC affair. For this reason, we are not able to report first-hand on proceedings.

Afterwards Matyumza told Grocott’s Mail, “The meeting was called by the leadership of the region and subregion. It emanated from the resolution of the conference where they agreed to visit all the municipalities – that they need to come closer to the community – and hear their concerns.”

And in a telephone interview today, Hobbs told Grocott’s Mail that this week’s meeting had been successful.

“The main objective of yesterday’s meeting was to listen to the ordinary citizens of Makana,” Hobbs told Grocott’s Mail. “We listened to their concerns and we take the issues they raised very very seriously. We are taking the outcome of that meeting to the Regional Working Committee.”

Inside the venue, Matyumza’s instruction for Grocott’s Mail and the Dispatch to leave was reinforced by security in the form of an MK Veterans member. Solethu Lucas (Youth League Chair and additional REC member) and another member, followed the two journalists outside and monitored them until they left.

Various people who remained in the meeting spoke afterwards to Grocott’s Mail.

According to one source, the REC said that:
* The Makana Council will not be put under administration.
* Provincial Chairperson Oscar Mabuyane will be meeting with Makana councillors in Makhanda on Monday 19 November.
* The regional leadership supports a proposal to reshuffle the Mayor and the Mayoral Committee.

Another source, who is an ANC member, said, “This should have been a much broader community discussion. It is not only card-carrying ANC members who are affected by maladministration, infrastructure failure, water outages: everyone is affected.”

Of the invitation to members to critically assess the performance of local leadership, another member who remained at the venue said, “There is no way the people here are going to be directly critical of local leadership: they are all unemployed and depend on getting projects work for a living. If they speak out against leadership, they won’t get chosen next time there’s a project.”

Another said, “It was a joke. It was a waste of time – it was nothing but a complaints forum about poor service delivery. When I left there were still a hundred people with their hands up waiting to be heard.”

One member was critical of former Makana mayor Zamuxolo Peter’s presence as one of the problem solvers. “What use was it to refer the complaints to him?” said the member. “He knows everything because he was the Mayor before.”

The crisis meeting came after a difficult 10 days in the ANC-led Makana Council that included:

Monday 29 October
Special Council meeting has to be adjourned because there is
no quorum after a DA walk-out. The party objected to the exclusion of two motions of question from the agenda. The items had been submitted correctly, it was established.

Monday 29 October
A letter from an anonymous whistleblower emailed simultaneously to media, and the DA among others fingers a senior ANC councillor in alleged corruption regarding the CBD roads upgrade project. Grocott’s Mail is still investigating these claims.

Tuesday 6 November
Hundreds of residents from across Makhanda (Grahamstown) march to the City Hall with a 20 758-signature petition calling for the Makana Council to be dissolved and the municipality to be put under administration.

Tuesday 6 November
The party’s regional leadership intervenes to stop a counter-march organised by the ANC Subregion that would likely have led to clashes, with overlapping times and routes. The REC criticised the move to oppose the petition march as being against the democratic principles of the Congress movement.

Wednesday 7 November
More than eight armed SAPS officer and two traffic officers are called by the municipal manager, on the Speaker’s instruction, to remove two councillors. This followed a heated exchange between members of the DA caucus and the Speaker Yandiswa Vara that disrupted proceedings for an hour and a half. At issue was the exclusion, again, of the two motions from the agenda, despite written assurance from the MM that they had been mistakenly omitted and would definitely be in.

Speaker Yandiswa Vara stuck to her guns in insisting on one of Council’s rules of order that no new items may be added in the resumption of an adjourned meeting. The items weren’t in the original agenda, Vara insisted in a circular argument, therefore they couldn’t be included in that agenda.

Public service watchdog PSAM later questioned the Speaker’s decision to allow armed police into Council and called on her to explain what law the two councillors who were removed had broken.

Friday 9 November
The petition is taken by hand by a delegation to the Bhisho offices of Cogta MEC Fikile Xasa.

Sunday 11 November
After a brief respite from persistent smoke from the municipal landfill site, the dump starts smouldering again.

Monday 12 November
Lawyers on behalf of the Makana Unity League demand action by the municipality to comply with a 2015 court order to get the municipal landfill site in order, or face a contempt of court charge with costs. Grocott’s Mail has requested Makana Municipality’s response to a query about this.

Matyumza emphasised that the regional leadership visit had nothing to do with recent events, however.
“The imbizo was in line with the resolution of the regional conference that leadership must reconnect with all the subregions,” he said in a telephone interview today. “It was not [an outcome of]what happened this week. The region is simply executing its ‘Thuma Mina’ mandate of interacting with members on the ground.”

Matyumza said he was not aware of any process to reshuffle the local leadership.

Meanwhile the South African Communist Party has called on the ANC leadership to intervene decisively in Makana Municipality. In a statement issued this afternoon, the party’s district leadership said, “As the SACP in Chule “KK” Papiyane we are gravely concerned about the state of affairs within the Makana Local Municipality which has persisted in spite of the many interventions by different organs of the state and the ANC Regional leadership.

“The residents of that municipality have been getting a raw deal and deserve to better served by those they elected. The failure of the institution to deliver on its basic mandate lies at the lack of leadership at Council level. We are calling for a decisive political intervention in this regard.”