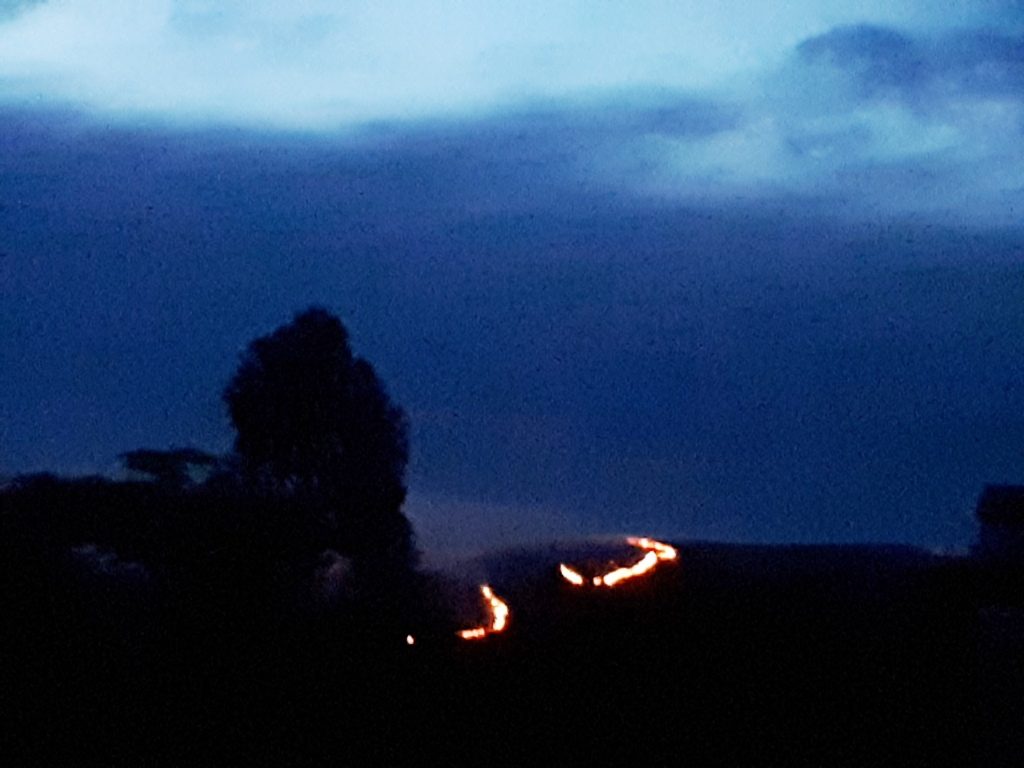 Landowners near the N2 and on the Highlands road west of Makhanda (Grahamstown) warned to be on high alert as fires spread up and down the mountain above Howiesons Poort. Photo taken around 8pm

Landowners on the N2 and Highlands Road should be on high alert as the veld fire that has been burning along the Highlands ridge for the past three days continued into the night on Saturday 3 November. The warning comes tonight from Fire Chief William Welkom. With winds picking up, farmers and smallholders  in the Stone Crescent area are poised to move animals and people, should it continue its path down to the N2 west of Makhanda (Grahamstown).

Fire station staff said at 8pm that teams were refilling water tanks to return to the ridge north of the N2. Teams have been monitoring the fires for the past three days. At 8pm tonight, the fire circle began at the top of the ridge above Craig Doone and was less than a kilometre from the first building in the valley.

Vegetation was burning strongly in dropoff next to and on the north side of the N2 just east of the lowest point of Howieson’s Poort and high flames were visible behind the treeline at the Salem Crossroad farm, less than a kilometre from the farm stall.

At that time no flames were visible from the Highlands Road side of the ridge.

Welkom said at 9.10pm that although the fire was burning slowly  on the  mountain slopes, Landowners on the N2 and Highlands Road should be on high alert in case of a  change in wind speed and direction.

“The fire is burning near Pumba at the moment. The fire will be monitored throughout the night,” Welkom said.