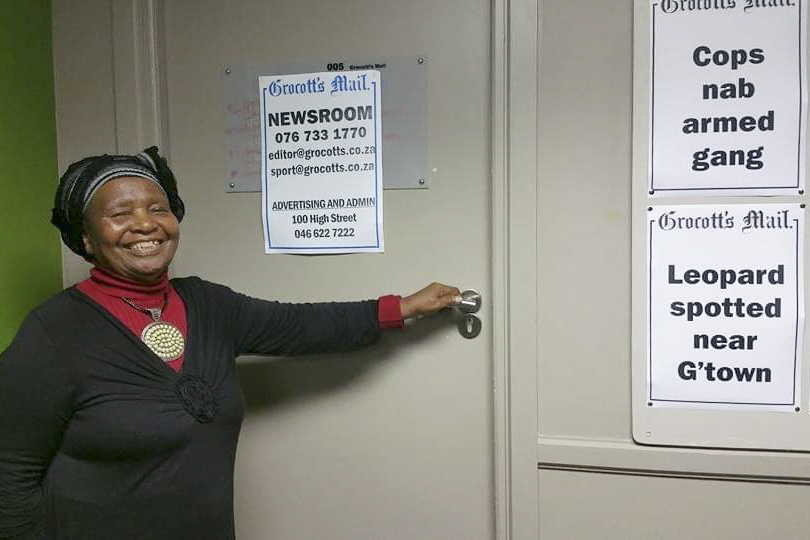 Retired Makhanda (Grahamstown) teacher Nomonde Olive Ngesi passed away on Wednesday 17 October at the age of 87. Her memorial will be held Saturday 27 October, at the Monument.

The Newtown, Fingo Village great-grandmother, whom Grocott’s Mail readers came to know and love as ‘Old Eyes’, was airlifted to Port Elizabeth for specialist treatment after a medical emergency. Third-born son Noel, who had followed in his car, was devastated to be told on his arrival that she had passed away en route.

Olive was ‘Ma’am’ to many Grahamstown children during a lifelong career as a teacher and a number of successful former pupils from her times at Ntsika and Nombulelo Secondary Schools still hold her close in their outlook on life and their careers. Her last teaching role was as Principal of Samuel Ntlebi Primary School from 1993 to 1997.

In more recent years, she served on the SGB at Good Shepherd Primary. Her granddaughters Lisakhanya and Buhlali brought light to Olive’s home, staying with her at the Newtown, Fingo Village house during term-time. Olive is survived by five of her seven children – Unathi, Noel, Cokisani, Siphokazi and Nomda. She endured the heartbreak of having her first-born Andile and fifth-born Nceba passing away during her lifetime, as well as her husband, Wele Wellington Ngesi, who died in 2007. She leaves 20 grandchildren and 17 great-grandchildren.

Andile’s son, Keith Ngesi, said, “The family – her children, grandchildren and great-grandchildren – are saddened but we have chosen to celebrate a life well lived. Olive was something special to many people: the community is grieving her loss, too.

“Her exit from this world was phenomenal as she departed on the same day she was born.”

We know that our readers and admirers of MaNgesi’s wise, funny and to-the-point ways and words join us at Grocott’s Mail in thanking the Ngesi family for sharing ‘Old Eyes’ with us and making sure she had the time, space and facilities to bring her insights to a community in great need of sharp wit, and wisdom.

The family have invited the community to attend a memorial service for Nomonde Olive Ngesi on Saturday 27 October at 9.30am in the Guy Butler Theatre at the Monument.