Come for a drink and a tall story 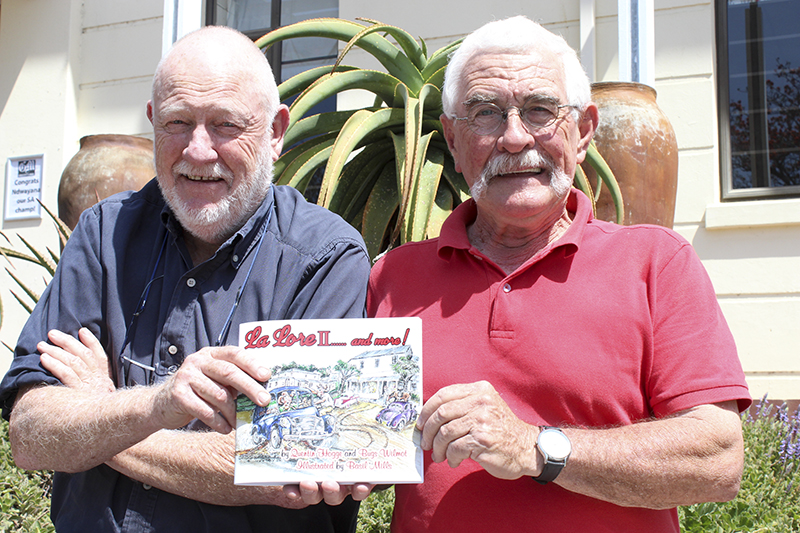 Co-authors Quentin Hogge and Bugs Wilmot with the sequel to LA Lore to be launched at the Ploughman Pub in Bathurst on Friday 19 October. Photo: Sue Maclennan

Harness the energy, experience and talents of an artist, a scientist and a teacher – all from the Lower Albany – and the result is a book: LA LORE II … and more. The book is a collaboration between Brian ‘Bugs’ Wilmot, Quentin Hogge and Basil Mills.

The book is a compilation of over 40 stories from that unique spot on God’s earth, the Lower Albany. This is the area from Grahamstown via Bathurst to Port Alfred. From the Great Fish River to the equally great Bushman’s River and the farms in between. There are excursions to Hell’s Poort and King William’s Town too. All the stories illustrate the “lighter side” of life in the Lower Albany.

Take the story, for example, of Bobby Millar and the bet with the Texans about the size of the Thanksgiving Turkey. The Texans wagered that Bobby could not produce a turkey anywhere near the size and taste of a Texas turkey. In response Bobby put on the table an enormous bird braaied to perfection. The astounded Texans paid. Only much later Bobby revealed that he served a young ostrich. Or recall the famous incident where a white horse patronised the Pig and Whistle pub and caused consternation to a farmer.

LA Lore was published 25 years ago and was the product of Bugs’s febrile brain and Gerard Marx’s glorious cartoons. 25 years is a long time to wait for a sequel, but as Judge Eric Leach notes in his introduction to LA Lore II, ‘Things move S-L-O-W-L-Y in the Lower Albany, but the wait has been worth it’.

Bugs, now retired to Port Alfred, is an entomologist who became director of the Albany Museum and then was elevated to Director of Museum Services for the Cape Province. Later, after a stint running the National Schools Science Festival, Bugs was instrumental in rejuvenating and putting on the international map, the Olive Schreiner Museum in Cradock.

Basil is a Fine Arts graduate from Rhodes University. He is an Education Officer at the National English Literary Museum where his varied skills include a vast knowledge of local history and an unmatched ability to communicate this knowledge to a wide range of audiences. His artistic expertise is magnificent as evidenced by the astounding illustrations for LA Lore II.

Quentin is a teacher and author of four anthologies of poetry. He wants to retire before death, but isn’t very hopeful.

The authors have invited anyone who cares for a good story and a drink to join them at 6.30pm on Friday 19 October at the Ploughman Pub at the Bathurst Showgrounds.