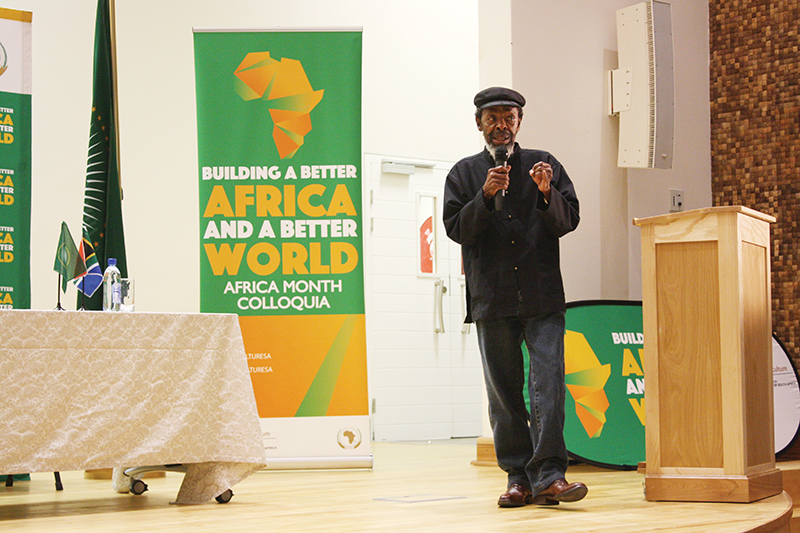 Kgositsile was born, raised and educated in Johannesburg. He began his writing career as a journalist for the New Age. In 1961 when there was clampdown on the opposition press Kgositsile went into exile, first working in Tanzania after which he spent several years in the United States where he continued his education, including a Master of Fine Art from Columbia University in New York. While Kgositsile was in the US he was attracted to the current writings and debates within the African-American cultural scene and went on out to meet, share ideas and platforms with several of the leading African-American writers and poets.  He was also inspired by music, particularly jazz and was able to meet many of the iconic jazz musicians and singers of the 1960’s and 70’s.  Many of his poems pay tribute to the writers and musicians that he met during this time. Kgositsile taught in several American universities and wrote articles for books, newspapers and journals, particularly on cultural matters.

He returned to Africa in 1975 where he taught at schools and universities and worked for the ANC in exile in Tanzania, Botswana and Zambia.

On his return to South Africa in 1990, Kgositsile made a large impact on the literary and cultural scene in South Africa. Kgositsile always believed that writers, artists, musicians and other cultural practitioners had a vital role to play in the liberation struggle, efforts that needed to be continued into post-apartheid South Africa. Leading by example (and enthusiasm), he went on to be appointed as Special Adviser to the Minister in the Department of Arts and Culture.

“Bra Willie” as he was affectionately known succeeded Mazisi Kunene as Poet Laureate in 2006. He received many accolades including the Order of Ikhamanga (Silver) in 2008.

Professor Kgositsile paid several visits to Grahamstown, often as part of Department of Arts and Culture delegations at the National Arts Festival. In 2016, just after the National English Literary Museum moved to its new building, he was one of the delegates that attended the Africa Month Colloquium along with Professor Zakes Mda and Lebo Mashile.

On one visit his poem appeared in the Wordfest daily newspaper, Wordstock (Wednesday 8 July, 2009, p2):

We now know past any argument
that places can have scars
and they can be warm
or cold or full of intrigue
like faces.
Since the settler
set his odious foot here in 1820,
My Caribbean brother might say,
These hills have not been joyful together

those who know say

anywhere you go is uphill