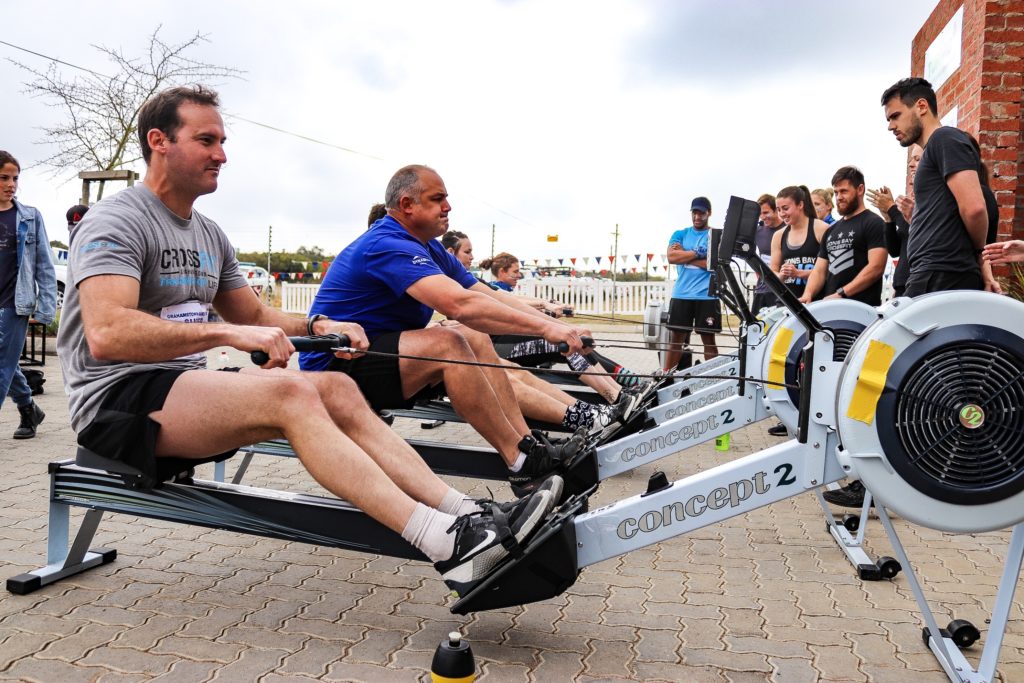 Teams gear up for an intense session of Ergo Rows as part of the Grahamstown Games. Photo: Stephen Kisbey-Green

Local CrossFit studio, the Fitness Box, hosted to the second annual Grahamstown Games on Saturday 1 September. The day, organised by Dynamic Events, consisted of teams of four (a pair of men and women), competing in five events at the workshop complex in the Industrial area.

The teams that took on the challenge had to conquer an obstacle course, a 16-minute CrossFit bootcamp workout, and another 16-minute Ergo rowing relay. All this had to be finished by each before the team could attempt both a trail running relay and a cycling race. Two members from each team had to cycle a 5.2km circuit route, while the other two members ran the relay trail route.

After all of the events were completed, the athletes could relax around the Workshop, enjoying their hard-earned coffee from Noom, or a beer from Featherstone Brewery, while they recovered from the extreme workout.

Kimberleigh Oxenham, the organiser of this year’s Grahamstown Games, was very happy with the turnout and with how smoothly the events went on the day. “Everything [ran]a lot smoother, we are more organised and we know where everything is going,” said Oxenham, “and I think that everyone [enjoyed]it.”

The different events and challenges were scored according to their times and the number of exercises and reps completed by the teams in the allotted time, allowing a winning team to be declared. In addition to the winners and runners up, a large number of lucky draws were given out, and all participants received a goodies bag for competing.

After this year’s success, there are plans to make the annual event a bi-annual one, which would be hosted twice a year, to challenge the wider community to push themselves to their limits.