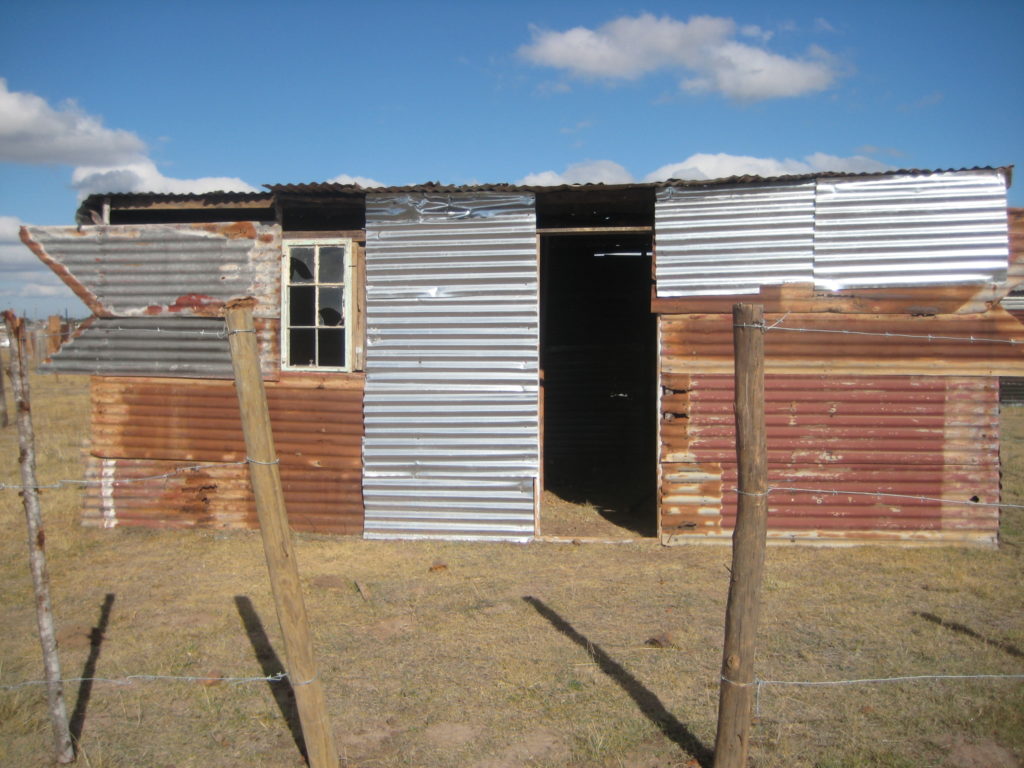 Finished structure in ext10 shortage about the door

Settlers from the newly established eNkanini informal settlement north of Mayfield have demanded water, electricity and sanitation from Makana Municipality.

Chairperson of the Infrastructure and Engineering portfolio committee Mabhuti Matyumza confirmed a delegation had come to the City Hall this week, requesting services.

In June 2017, people flocked to the veld adjacent to houses in Mayfield and Transit camp where a self appointed committee allocated them plots. Poles were put in and structures have mushroomed over the past year, with more than a thousand now scattered across the commonage. The area is known as eNkanini.

eNkanini’s western border is metres away from the expanse of land where Phase 2 of the Mayfield housing was supposed to have been built by now. Sewage and water infrastructure put in more than two years ago is now damaged by weather and vandalism. The houses can’t be built until the water and sewage infrastructure upgrades under way are completed.

This month, Grocott’s Mail has reported on land grabs that started on 31 July on land adjacent to Vukani, on the south-west edge of the city.

With Makana Municipality having recently lost their bid to interdict settlement at Nkanini and more land being rapidly annexed near Vukani, they are already on the back foot when it comes to dealing with a growing crisis in informal housing.

In his opening address at yesterday’s portfolio committee meeting, Matyumza said of the settlers’ demands for services, “It is their constitutional right – but it’s an unfunded mandate because it’s an unplanned development. It’s not that we didn’t see this coming – it’s that we didn’t have a plan for it,” he told councillors and officials.

Suggesting that next year’s general elections were a factor in a level of demand that had reached uncontrollable proportions, he said, “We don’t have the capacity to service those needs.”

While upgrades to increase the water supply were under way, demand meanwhile far outstripped supply, resulting in frequent and prolonged water outages – and that was in developed areas.

Reports in Thursday’s Infrastructure Committee agenda contain full updates on all the infrastructure upgrades under way in the municipality, along with details of funding and budget spending.

On Tuesday Grocott’s Mail visited Nkanini. There was a lot of activity. Young and old were carrying roof poles, some pushing wheelbarrows loaded with corrugated iron.  A bakkie loaded with fencing and building materials was being offloaded. Nails were being hammered at the front of one house, while at the back, some were busy digging a pit toilet.

When Grocott’s Mail spoke to the settlers last year, they said they were building there out of desperation because they couldn’t afford to pay rent for the backyard shacks they’d been living in.

There and at the new Vukani settlement, their major concern is to get electricity and water.

”We have applied for RDP houses,” a group of Vukani settlers told Grocott’s Mail. “Many times. We never got houses.”

Some said they had put their names on the list at the housing department long time ago. But instead of them getting houses, they saw young people taking ownership, who didn’t even live there.

Former Mayor Zamuxolo Peter acknowledged corruption in the allocation of RDP housing in Makana at the time Mayfield Phase 1 was nearing completion.

Spokesperson Yoliswa Ramokolo told Grocott’s Mail on Thursday 16 August, “We took the matter to court and the municipality lost.

“We will study the judgment to see on what basis they’ve made this ruling and see if we have grounds for appeal.”

No excuse for poor planning

Public service watchdog PSAM says all residents have the right to clean water, housing and a healthy environment.

Researcher Zukiswa Kota said, “While the PSAM  acknowledges the dynamic nature of human settlements and consequent demands for housing, there can be no excuse for poor planning that results in the infringement of  fundamental human rights.”

Kota said all residents have, under the Constitution, the right to access clean water and housing (Section 27), a healthy environment (Section 24).

“It is especially important here for the municipality to prioritise women, children and other vulnerable members of the settlement in the provisioning of safe housing and clean water.”

Alongside the municipality, the departments of Human Settlements, Water and Sanitation and Cooperative Governance and Traditional Affairs were also responsible for upholding these basic human rights.

“It is incumbent on Makana to request strategic assistance from these provincial departments in addition to identifying these challenges in their IDP processes,” Kota said. “Has there been adequate, proactive forward-planning by Makana in this regard?”