Tears for Khensani in symbolic march 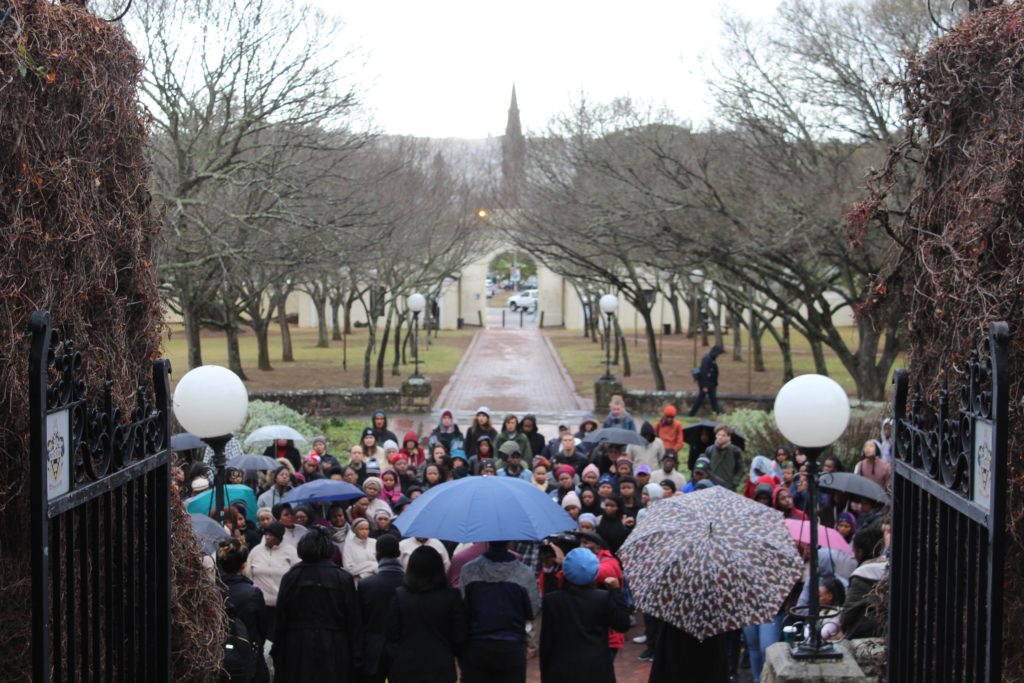 The Rhodes University community gathers ahead of a march to the Monument in honour of Khensani Maseko on Tuesday 7 August. Photo: Kathryn Cleary

Rhodes community mourns student in march and a day of dialogue

On the morning of Tuesday 7 August, dark clouds loomed over Grahamstown (Makhanda) as Rhodes University students and staff gathered in tearful memory of student Khensani Maseko. Maseko tragically took her own life on Friday 3 August. It has been reported that she suffered depression after allegedly being raped by her boyfriend in May this year.

Yesterday, 6 August, Grocott’s Mail reported that students and staff, led by the Student Representative Council (SRC) called for an academic shutdown of the university in light of Maseko’s passing. Vice Chancellor Dr Sizwe Mabizela responded to the university community’s concerns, agreeing to halt academics through the following day. Tuesday’s academic programme was replaced with a commemoration for Maseko, and discussions surrounding gender-based violence. As students and staff convened in front of the university’s main administration building, rain began to pour from the dark skies overhead. SRC President Nhlakanipho Mahlangu led the crowd in solemn singing, as they prepared to march to Settlers Monument. The march symbolised where Maseko would have ended her journey at Rhodes.

“What we are here to do today is not a small thing,” Mahlangu said addressing the crowd at the Monument. “What makes Khensani’s death sad is that she is not the only one who didn’t get to end her journey of higher education the way she envisioned.”

Mabizela then spoke about gender-based violence. “We as a society have failed Khensani, and many other young women like her.” He added that this was a result of failing to teach men to respect women. “We thank the Maseko family for entrusting Khensani’s education to us. Unfortunately, [she]was not able to walk the final steps of her journey here.”

“Khensani did not deserve to die under the circumstances which she did.”

SRC Advisor Eric Ofei took the podium next. Ofei knew Maseko well.  He spoke about Maseko’s ambition from her first year at Rhodes, eager to run for a position in the SRC. “She always wanted to trend,” he said.

Maseko’s death has made national headlines and trended on social media since Friday.

“She wanted to be Miss South Africa,” said Ofei.

The rain ceased outside, and inside, tears flooded the crowd. Students continued to share stories and poems of their experiences with gender-based violence, and fond memories of Maseko.

“To the brothers here, you need to do better. We need to do better,” emphasised Dingaan Booi, a member of the university’s Independent Electoral Board. “It cannot be that she dies in vain.”

Students dispersed from the Monument at midday, and reconvened at 2pm to further discuss gender-based violence.