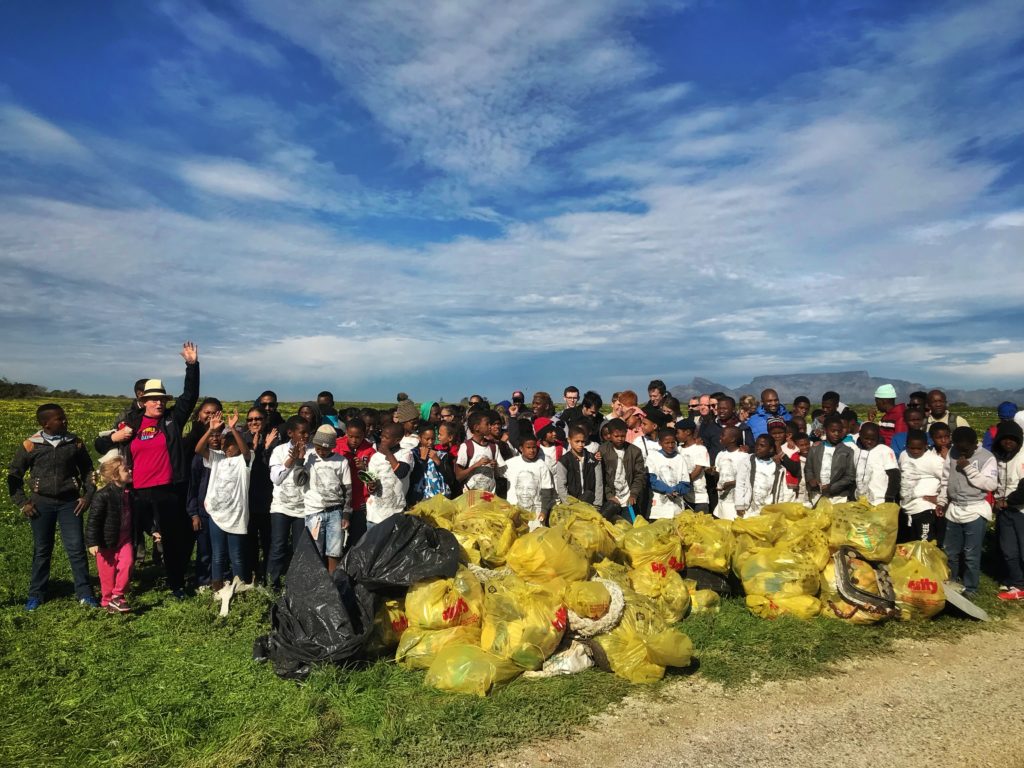 Waves for Change and Let's do it! World come together after a successful clean-up of a Robben Island beach. Photo: Kathryn Cleary.

On 16 July, in honour of Nelson Mandela’s 100th birthday, British High Commissioner to South Africa, Nigel Casey, accompanied volunteers and children from Cape Town based NGO, Waves for Change (W4C) to Robben Island in Cape Town. The group took part in a clean-up of the island, paying particular attention to plastic waste. Members of Let’s Do It! World were also present.

“Let’s do it! Zero waste!”, chanted children and community members.

Items like plastic straws, chip and sweets packets as well as fishing line made up the bulk of the collected rubbish.

“[Plastic pollution] is a pressing problem for South Africa, and for the UK and for the whole planet.”, Casey told Grocott’s Mail.

“We hope [the children]will come away with some strong memories, thoughts about Mandela and what they can do in their own communities, but also of plastics in our oceans.”

“Initially, the programme only involved taking children surfing, to give them access to a fun activity and a different setting; soon the guys realised that one of the main reasons the children were coming was to have someone to talk to – very importantly, someone who listened to them when they spoke.”

Due to the trauma the children from areas like Masiphumelele, Lavender Hill and Ocean View were experiencing in their communities, as well as a lack of mental healthcare resources, W4C grew into much more than surfing.

“Tim, Bongani, and Apish teamed up with mental health professionals, researchers, and development experts to create what is now an award-winning evidence based international surf therapy programme”, said Heese.

Muizenberg Site Manager, Liesel James attended the Robben Island visit with the children. “The best thing we can do for a child living in these communities is to take them out of the community to experience new things and to experience fun and just to be free,” she said.

The clean-up was a huge success, with tens of bags of rubbish cleaned off the beach, and Casey taking a pledge to never use a plastic straw again.

“I’m disgusted with what we found here this morning”, he said.  “Nothing is being done on Robben Island, which is a national treasure.”

Mackenzie stated that he plans to follow-up on this issue of plastic pollution on Robben Island, to better ensure the protection of the national park.

After the clean-up, the children enjoyed a tour of the old prison by an ex-prisoner; listening attentively to stories of inequality, hunger strikes, courage and strength. The tour finished with a look at Mandela’s old cell, an experience that these children will not soon forget.

“The ex-prisoner was a great inspiration, and the kids were very present during the tour. That was the highlight of the day for sure,” said James.

W4C also have sites in the Eastern Cape, including East London and Port Elizabeth. Grocott’s Mail will continue to follow the work of the W4C team.