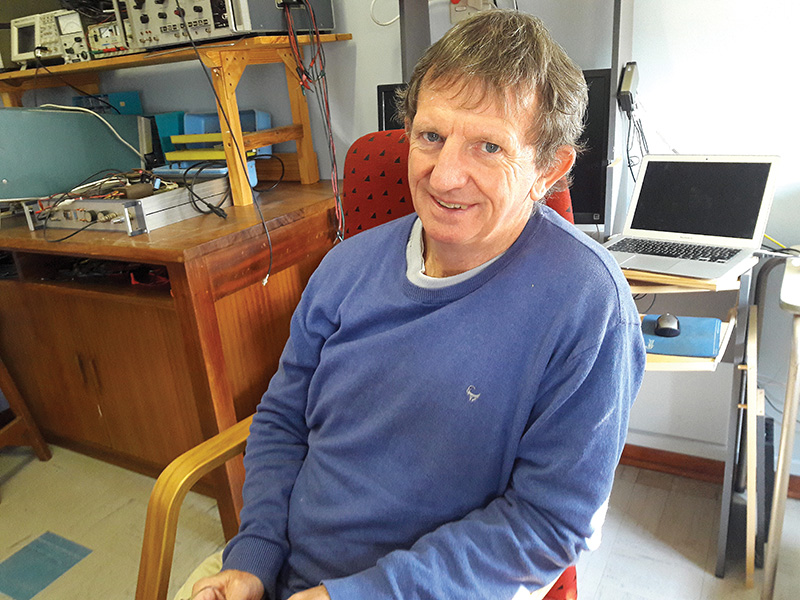 The 64 MeerKAT radio antennae situated in the Northern Cape have produced an astounding image of the centre of our Milky Way galaxy due in no small part to the expertise and servers made available by Rhodes University.

The image, released to coincide with the official launch of the MeerKAT precursor array, vividly shows how incredibly active the centre of our galaxy is. Dominated by a supermassive black hole, the region is a maelstrom of supernova remnants, radio filaments and new star formation previously hidden behind large clouds of dust and gas. Earth is about 25 000 light-years from the centre of the galaxy which is invisible to optical telescopes, but radio waves pass through the dust, making the MeerKAT image spectacularly clear.

Rhodes University’s Professor Justin Jonas, as Chief Technologist of the project, has played a key role in the development of the MeerKAT array since its inception and will continue to oversee specialised building operations.

He labels the inauguration of MeerKAT as ‘a game-changer’ which is the largest scientific infrastructure in Africa.

He points out that colleagues and former students at Rhodes University have played pivotal roles in the MeerKAT array which is in turn a precursor project of the Square Kilometres Array (SKA) radio telescope.

SKA is a joint South African and Australian radio astronomy telescope that Jonas describes as the biggest science project in the southern hemisphere. Centred near Carnavon in the Northern Cape, SKA will have dishes in several sub-Saharan countries as well as a specialised array in Western Australia.

It will be used to seek out elusive dark matter that astronomers believe make up the greater part of the universe and most intriguing of all, Jonas said the array could identify extra-terrestrial civilisations.

Jonas said MeerKAT is the largest radio telescopes in its class in the world, and the SKA will be considerably bigger as the combined area of its antenna will be approximately one square kilometre.

He added that the recently completed FAST telescope in China is the biggest single-dish telescope in the world with a diameter of 500 metres – dwarfing the 300-metre Arecibo Observatory in Puerto Rico and the 13.5 metre spans of the MeerKAT dishes.  Jonas explained that FAST and SKA will not be competing against each other as they will specialise in different tasks. Furthermore, as the one is in the southern hemisphere and the other in the northern hemisphere they will be complementary in many respects.

Jonas is proud of the South African contribution to the project. While there have been substantial contributions from overseas, SKA is largely funded, designed and built locally. He says the project has met its 75% local content targets.

Jonas said SKA is taking the search for extra-terrestrial life seriously. They are negotiating with an American organisation committed to Search for Extra Terrestrial Intelligence (SETI) about the deployment of instruments dedicated to this task.

He said SKA will make all of the raw data signals available to anybody who can connect a piece of equipment to the telescope array and in this way they will be able to monitor incoming radio signals from another civilisation. There won’t be specific observations dedicated to SETI but all vast amounts of data will be made available for this purpose.

He is not sure they will find extra-terrestrial intelligence out there, but if we do, he pauses in awe of the thought, “it would just be the most significant thing in human history”.

Jonas said it would change “our human understanding of our position in in the universe. I mean, at the moment now, we fight over small borders, over countries and have these terribly nationalistic and egotistical views of what we are, you know, but as soon as there’s somebody else out there…”