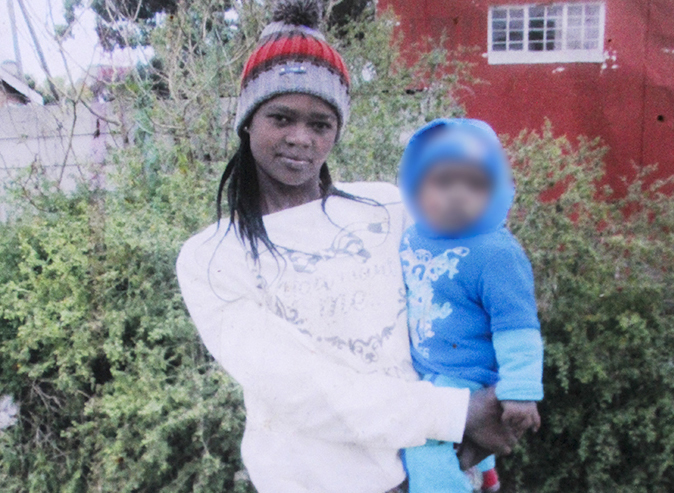 Denise Nogqala with the younger of her two sons in May 2015. Photo altered to protect the child’s identity. Two men have been sentenced for her murder. Photo: Family album

A young man sentenced this week to 25 years imprisonment for Denise Nogqala’s murder intends to appeal his conviction. Judge Mbulelo Jolwana yesterday sentenced Lindani Vamva for the murder and Siphamandla Futhufuthu for the rape and murder of the young mother of two during an end-of-term celebration on 4 December 2016.

Vamva was 18 at the time and a pupil at a local high school. Futhufuthu was 19. A third teenager was acquitted on both charges. He was 16 on the night of the assault and still a minor (17) at the time of the trial which was therefore heard in camera. Denise was 22 and the mother of two young boys, 2 and 4 years old at the time. The case shocked the Grahamstown community because of the extreme brutality of her death and the callous way her body was left dumped among rubbish at the top of M Street. She was discovered there by a resident in the early hours of Monday 5 December.

This week started with pre-sentencing reports, which Judge Jolwana referred to before he sentenced Vamva to 25 years imprisonment for Count 2 (murder), with five years suspended, and Futhufuthu to 20 years on the first count of rape and 25 years for murder (five years suspended). Futhufuthu is currently serving another sentence, for murder and the Judge ordered that all three sentences run concurrently.

The Judge said while the Criminal Procedure Act sets out the minimum prescribed sentence for murder as life imprisonment, the law allowed for deviation under substantial and compelling circumstances, which he believed there were.

The Judge spoke about the extreme brutality of Denise’s death. He went over again in detail the horrific injuries inflicted on every part of Denise’s body, as reported by forensic pathologist Stuart Dwyer. “This assault on this defenceless woman can only be described as inhumane savagery,” he said. He spoke about the pain Denise would have endured until she succumbed to death.

Her death had caused her family extra pain and suffering.

“Her young children will endure life without the love, care and warmth that only a mother can give a child,” Judge Jolwana said. They were now being cared for by her family, who had not only lost the financial support she provided as a farm worker, but also the accommodation they’d had on the farm because she worked there.

He also acknowledged the disgust “the whole community of Joza must feel” about the actions of the young men, in whose company Denise had had every reason to believe she would be safe.

In granting them sentences less than life, Judge Jolwana said he believed both young men had been severely affected by losing their parents at a very young age (Vamva was 11 and Futhufuthu 12 when they lost their mothers). Both had lacked parental guidance during their upbringing – particularly in their teenage years.

In Vamva’s case it had been revealed that when his father, who had worked at Makana Municipality, died in 2015, the entire death benefit of R200 000 was paid to Vamva – then just 17.

“He used some of the money for household necessities, a tombstone for his grandmother and to pay for a traditional ceremony for his late mother,” Judge Jolwana said, referring to the pre-sentencing report.

But inheriting this large sum of money paid to him directly, as a young teenager without adult supervision, was disastrous for Vamva, the Judge observed.

Much of the evidence centred around the membership of the three accused, as well as several witnesses, of a social group called Chaos, known for spending lots of money on expensive clothing, alcohol and other social activities.

Futhufuthu’s grandmother cared for him after his mother died, before he was put into foster care. All three accused and several of the witnesses grew up in the same neighbourhood.

Advocate Jock McConnachie, who appeared for Vamva, said he would be applying for leave to appeal against his client’s conviction. Deon Geldenhuys appeared for Futhufuthu. Jannie Engelbrecht led the State’s case.