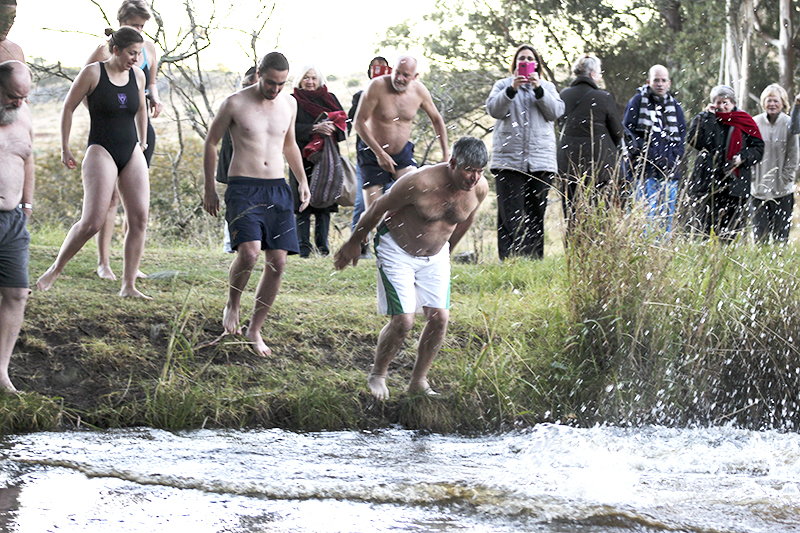 Strauss de Jager, about to take the Polar Punge along with just over a dozen other brave swimmers, at Grey Dam on Thursday 21 June 2018, the Winter Solstice. Photo: Sue Maclennan

By 7.30am on Midwinter’s Day, it had warmed up to nearly 6C in Grahamstown. That was the moment just over a dozen people braved Grey Dam’s icy water for the 13th annual Polar Plunge.

Richard Foss was there to inspire participants with the idea of making the world a warmer place – words composed by Polar partner and co-founder George Euvrard who missed this year’s event. The swimmers, as per tradition, set off with the words, “And so we leave the longest and darkest night of the year and go into the light!” The idea is based on the fact that the Winter Solstice is the longest night, and marks the year’s turning point towards more warmth and more light. Foss has participated every year except one.

Rhodes Law Professor Jobst Bodenstein sent a group Whatsapp to everyone on his contact list, promising to do the swim if they would collectively donate 67 blankets for PG Glass’s Winter Warmer campaign. It’s just under a month to Mandela Day, when citizens are encouraged to donate 67 minutes of their time to the service of the community. The number honours the 67 years the late former president spent fighting for social justice in South Africa.

Every year, PG Glass challenges participants and supporters to bring an item of warm clothing, or a blanket, to bring warmth and comfort to needy people in Grahamstown. The object is to fill the PG Glass bakkie for their Winter Warmer campaign – and this year they did.

Later on Thursday Bodenstein told Grocott’s Mail, “The sponsorships for my Plunge have since increased from 67 to 83. I am overwhelmed by the generosity of  Grahamstown residents, family and friends.”

Taking a solidarity icy plunge in Wooley’s Tidal Pool in Clovelly, Cape Town, was Martin Scholtz – another regular who now lives in Cape Town. He and some friends did their plunge at exactly 7.30am – the same time as the Grey Dam event.

“It was to continue the tradition that I was involved with while living in Grahamstown,” said Scholtz, a former director of the President’s Award. He was joined by some friends to whom he’s introduced the idea. “Wonderfully invigorating!” was their verdict.

Several member of the NG Kerk congregation were there to audit the participation of Dominee Strauss de Jager, whose rash promise landed him in cold water.

Every year,  De Jager challenges his congregation to reach a fundraising target at the annual bazaar and vows to undertake an uncomfortable challenge himself if they succeed.

They met the target – and the dominee had to keep his promise to participate in the Polar Plunge. What he kept everyone guessing about, though, was how he would dress for the swim. A member of his congregation during last Sunday’s church service challenged him to wear a Speedo.

“I’m not sure if I will wear a Speedo or not,” Strauss told Grocott’s Mail during a trip last Thursday to the dam to test the water’s temperature. “But I will keep my promise to swim!” He did – and the Speedo challenger – his wife Augusta – was there to welcome him out of the water with a warm blanket.

East Cape Pools’ Emile Fox and Zukisa Blou later checked the temperature of the water in the dam, which at midday was a balmy 12.1C at the edge and on the surface. “In the middle and below the surface it will be around 9 degrees,” said Fox. Zukisa Blou and Emile Fox from East Cape Pools check out the temperature of Grey Dam on Polar Plunge day – 21 June 2018. It was a balmy 12.1C Friends, supporters and participants at the 2018 Polar Plunge at Grey Dam.