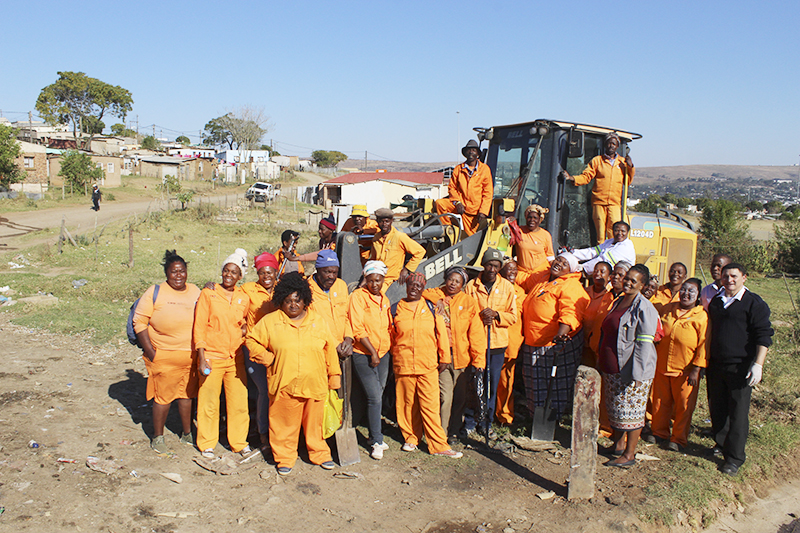 Mayor Nomhle Gaga (in white) leads a team of senior managers and Community Work Project employees in a cleanup of the K Street dumpsite on Wednesday 13 June. Photo: Sue Maclennan

Makana Mayor Nomhle Gaga, along with some of her senior managers, rolled up their sleeves and tackled the K Street dumpsite on Wednesday 13 June, as part of the City’s campaign to get its house in order.

“As Mayor, I’ve joined the ‘Thuma Mina’ (send me) call of the President. “In that sense, I am representing him here in Makana, in the project to reconnect government with the people through action.”

Gaga said number one was to clean up Grahamstown, targeting illegal dumping in particular. She said the cleanup was linked to a programme to create environmental awareness among communities, driven by Environmental Manager Ndumiso Nongwe.

A Council resolution was taken that each ward should clean up its local environment, in a campaign driven by the ward councillor, and with ward committee members, Community Work Project staff and any other volunteers, including councillors, hands on.

“We will continue until we have finished cleaning up all 43 illegal dumpsites across all the wards,” the Mayor said.

“We also want to make the community aware of the biomass project, by which carbon-neutral fuel will be generated from organic waste,” Gaga said.

The project would cap illegal dumping, generate revenue and create opportunities for SMMEs which would sort waste and sell it on to bigger companies, she said.

“We want to emphasise that it is illegal to dump and that we will be enforcing bylaws,” Gaga said. “There will be fines for dumping illegally.

“During the Cogta Minister’s visit, he said, ‘You must get your house in order’,” Gaga said. “Cleaning our town is one of our basics: we are sorting out our house.”