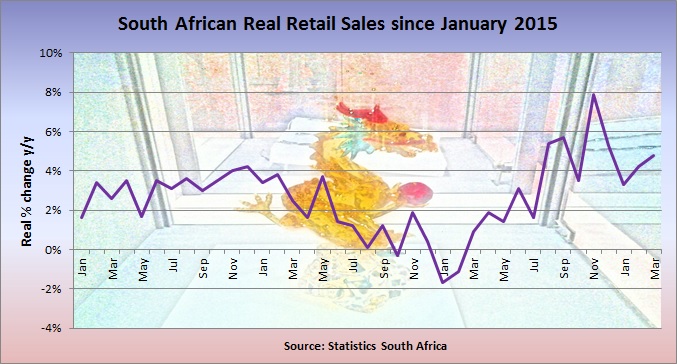 The first quarter 2018 showed a 5.2% seasonally adjusted annualised decline from the fourth quarter in real retail sales despite a 4.8% year-on-year (y/y) increase in March according to Statistics South Africa (Stats SA) data after a downwardly revised 4.2% (4.9%) y/y increase in February. The quarterly decrease was due to the strong sales in the fourth quarter 2017.

This is one of the reasons why imports have increased by 9.1% y/y in the first quarter, while exports have grown by only 0.4% y/y, as South African manufacturers have been slow to react to the improved demand conditions. That meant that overseas suppliers had to step into the gap left by domestic producers. The April ports data show a waning in import demand as full containers imported fell by 0.9% y/y.

In the fourth quarter 2017 real retail sales grew by 5.5% y/y, yet manufacturing production only increased by 1.9% y/y. That is why the survey of purchasing managers in the manufacturing sector show a continued depletion of inventories, as the inventory sub-index has been below the neutral 50 level for more than a year in April 2018.

The good news is that manufacturers are aware of their need to gear up production to meet improved demand, so they added 58,000 jobs in the first quarter compared with the fourth quarter.

Previous ArticleGrahamstown works to break free from fossil fuels
Next Article Dylan; poet; why not?