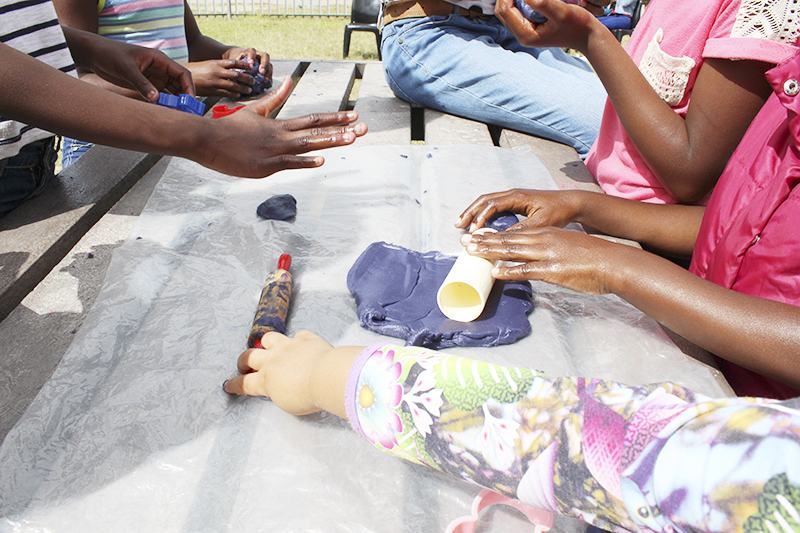 Young children have fun during last year's open day at Joza Youth Hub. An official responsible for the delayed payment of Grade R teachers will be held to account, the Education Department's District head has said. File photo: Sue Maclennan

The district head of the Department of Basic Education (DBE) says he is very sorry that Grade R teachers in Grahamstown have undergone the trauma of being paid late and says he will leave no stone unturned in seeing that the official responsible faces consequences. Meanwhile public service watchdog PSAM says the late and non-payment of Grade R teachers is a symptom of the marginalisation of early childhood development (ECD) practitioners.

Two weeks after payday, some Grade R teachers in the DBE’s Grahamstown Cluster Management Centre are still waiting for their monthly stipend. Usually paid on the last day of the month, the stipend amounts to R6 300. This is topped up by school governing bodies with amounts ranging from R1 500 to R2 000.

“We asked the Department what happened and they said our new contracts hadn’t been submitted by the due date,” said a Grade R teacher who did not want to be identified.

The teacher said all Grade R teachers had to renew their contracts annually.

“Everyone gave in their documents but something went wrong at the Grahamstown office and they never got to Bhisho.”

The teacher said they and others were experiencing problems because of the payment delay.

“We have debit orders that must go through and this makes things very difficult for us.”

Making things even more difficult was that there had been no communication on the matter.

“At least they could have told us there was going to be a delay, and when we can expect to be paid,” the teacher said. “There was no SMS, no email from the Department, nothing.”

He said the delay was due to the failure of an official in the Grahamstown office to process practitioners’ contracts. Grade R teachers are not permanent employees of provincial education departments, and so they are required to have their contracts renewed every year.

Ndabeni said the official responsible for processing the Grahamstown Grade R teachers’ renewal applications had been absent from work. She had delegated the task to a junior official in the office, who in turn failed to follow the correct processes.

“One official in the Department is supposed to supply a list for the extension of the Grade R contracts before 31 March, so that there is no lapse in payment before the new financial year. Unfortunately that person failed and that’s why there has been this delay,” De Bruyn told Grocott’s Mail today.

De Bruyn said because of the nature of the automated payroll system, these Grade R posts were removed from the system and had to be recreated by HR.

“As soon as I became aware of the situation, I stepped in to make sure everything was captured and the posts were processed,” De Bruyn said.

Asked whether the Department had made any arrangements to cover teachers for the shortfall period, De Bruyn said, “The unfortunate part is because this is a government department, there isn’t a way to provide loans. That’s why I put a hundred percent into rectifying the situation as quickly as possible.

“It is unacceptable that our officials get paid and our teachers don’t,” De Bruyn said. “This could have been prevented and there will definitely be disciplinary action taken. I am very sorry for the traumatic experience these teachers have undergone.”

Grade R teachers in the Northern Cape and KwaZulu-Natal have similarly experienced delayed payment, because of failure to process applications on time, or correctly.

Research Manager at the Public Service Accountability Monitor (PSAM) Zukiswa Kota says the late and non-payment of teachers is a symptom of the way Early Childhood Development (ECD) continues to be under-prioritised by both the DBE and the Department of Social Development.

“The fact the Grade R teachers’ remuneration is as low as it is an indictment on our education system as a whole,” Kota said. “This is despite foundation education being touted as a priority by Cabinet – through the newly approved national ECD policy and grant.”

Kota said the disarray between and within Departments in terms of supporting ECD was not just for the District level to address, but should be a provincial concern.

“In addition to the need to ensure more efficient salary payment systems and ensure accountability… there are clear systemic governance problems that need to be addressed,” Kota said. “The PSAM is alarmed by a number of issues. First, the ongoing lethargy in providing and supporting human resource capacity within the sector – this is not exclusive to Sarah Baartman.

“Second, an ECD policy that is still largely unfunded – in spite of the clear correlations between poor foundation phase education and outcomes in later years.”