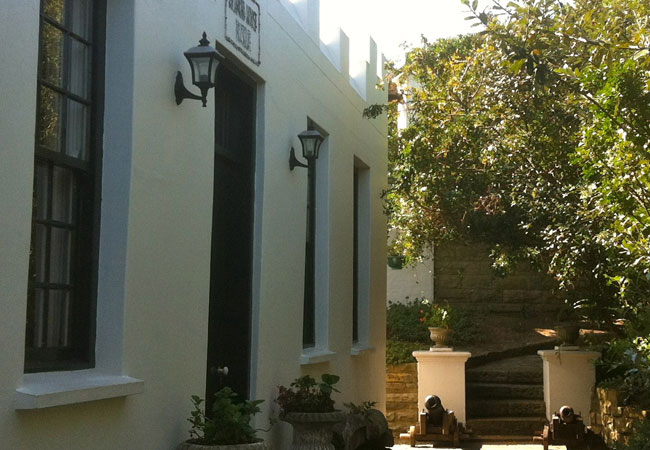 Richmond House Museum in Port Alfred - the venue for a poetry and music treat on Sunday 3 June.

‘Poetic Licence: a celebration of songs and words’ featuring Grahamstown artists is on the programme for Classics at the Castle in Port Alfred on Sunday 3 June. The  3pm feast of songs and readings by the talented wordsmiths takes place at Richmond House Museum and Music Room.

The first part of the programme spotlights four local poets, Quentin Hogge, Shirley Marais, Harry
Owen and Dan Wylie reading their own works. After the interval, Fafa Hopkins aka Chris Mann performs
‘Sweet is the Fruit of the Prickly Pear’ – song-poems and humorous anecdotes set in Port Alfred,
Grahamstown and SA’s hinterlands.

Quentin Hogge spent most of his life in Grahamstown, at school and university and then as a teacher at Kingswood College. He has published three books of poetry: ‘Of Birds and a Dream’, ‘Poems Boet’ and ‘More Poems, Boet’. Hogge wants to retire before he dies, but is not too hopeful.

Shirley Marais started writing seriously in 2012 as a means of processing the death of her spouse.
In 2017 she completed a two-year MA in Creative Writing at Rhodes University and has
had many poems published in various literary journals. She is currently teaching at Rhodes on the
Creative Writing Short Course and runs poetry-writing workshops in Gauteng and the Eastern Cape.

Harry Owen is the host of Grahamstown’s popular monthly open-floor event Reddits Poetry. He is the author of seven poetry collections and editor of the international anthology For Rhino in a Shrinking World, which suppors efforts to save the rhino (and the wilderness upon which it depends) from extinction.
Owen writes a fortnightly column for Grocott’s Mail called Poetic Licence.

Dan Wylie is a professor of English at Rhodes and has published three books on the Zulu leader Shaka; a
memoir Dead Leaves: Two Years in the Rhodesian War and several volumes of poetry. The Road
Out won the Olive Schreiner and Ingrid Jonker prizes. Most recently, he has concentrated on
Zimbabwean literature and on ecological concerns in literature. Most recently he published Elephant and Crocodile and Slow Fires.

Fafa Hopkins is the stage name of South African poet, singer song-writer and playwright Chris
Mann (Professor Emeritus of Poetry, Rhodes, and founder of Wordfest South Africa.). With over a dozen books and plays in his oeuvre, Hopkins is currently composing and performing an extended portfolio of song-poems set primarily in the hinterlands of South Africa. Some titles that will strike a chord
with locals are Kowie Cicadas, Pineapple League Country Cricket, Dancing in the Grand Hotel,
Graduation Song for a Son, Late Night Grahamstown Berg Wind Blues and The Shades that Abide
in the Blaauwkrantz River Bridge Pool.

Tickets at R55 go on sale from Friday 4 May from KNA (Kowie News Agency) Port Alfred. Out-of- towners may phone KNA (046 624 2036) to reserve their tickets, but these need to be collected and paid for soon after.