Another year… another turnaround 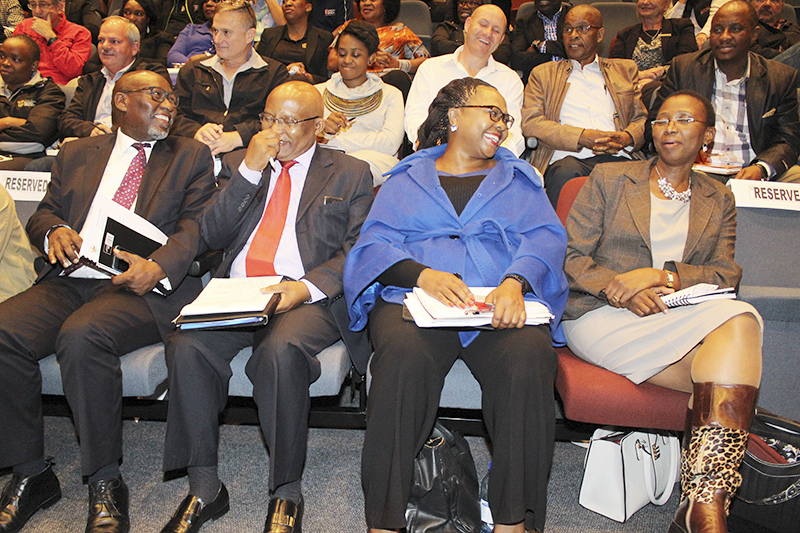 Members of the Cogta intervention team share a lighter moment as they are introduced to stakeholders in Grahamstown on 4 May. Photo: Sue Maclennan

The imminent intervention to turn Makana Municipality around, led by Minister of Co-operative Governance and Traditional Affairs Dr Zweli Mkhize, is the fourth in as many years. Are we dizzy yet? asks Grocott’s Mail.

LOWLIGHTS
* Some of the top management were incapable of carrying out changes.
* There was little support for Yako within a Council divided along both party and factional lines. Councillors retained the power to pass budgets. The R11-million Hlalani Multipurpose Centre was one of the budgets passed by councillors during this period.
* Money promised by other spheres of government to finance projects essential to the service delivery turnaround never materialised.
* While service delivery was one of the areas of responsibility explicitly delegated to Yako, she did not have the power to discipline officials directly responsible.
* The financial recovery plan drawn up by Yako was not implemented.
In her Intervention Final Report, Yako said, “The institutionalisation and funding of the financial recovery plan is going to be pivotal in sustaining the gains. Addressing the senior leadership challenges is also paramount and the filling of critical vacant positions has become extremely urgent. Further the need for a financial injection to help the municipality meet some of its obligations and to fund key projects in the financial recovery plan.”
COST TO MAKANA R3 089 928 .96

WHO Jongisizwe Gomomo
FROM Senior Manager in Co-operative Governance and Traditional Affairs
STATUS Section 139 (1) (b) Administrator appointed by the Provincial government
MANDATE
* Bring stability to the municipality
* Facilitate the immediate appointment of a permanent municipal manager
* Facilitate the finalisation of dozens of pending court cases against the municipality.
* Implement the recommendations of the previous administrator.
A presentation to Parliamentary committee noted that problems in Makana included:
* Institutional challenges: vacancies in key positions, a lack of capacity, need for a skills audit. Finance: the municipality had four disclaimers, creditors in excess of R100 million and a below average collection rate of 66 percent.
* Governance: inability to exercise oversight, ineffectiveness of Council structures, ineffectiveness of the delegation system and the governance framework.
* Service delivery: Backlogs and/or failures in water, electricity, sanitation, housing, and waste management.
* Public dissatisfaction: A number of public protests early in 2015.
STARTED August 2015
FINISHED September 2016
HIGHLIGHTS AND LOWLIGHTS
* Improving revenue collection –  A debt collection service provider was appointed (RevCo) to assist with revenue collection and this yielded a 2 percent increase in revenue collection, bringing the percentage up to 68 percent. This was still below the industry norm of 95 percent.
* Improving supply chain management (SCM)  - A senior manager from Cogta Eastern Cape (was working in this area. However there was not enough capacity to execute the tasks.
* Addressing Litigation Challenges –  It remained a challenge to meet current obligations and service long term debt, which was in excess of R100 million.
* Improving the functioning of the Human Resources Component  – A Human Resources (HR) Manager was appointed in May 2015 and COGTA-EC also seconded a senior official in July 2015. Work on HR policies, development of an employment equity (EE) plan and ensuring compliance with prescripts was still progress.
* Improving Audit Outcomes –  An audit intervention plan had been developed but there was a need to provide strategic leadership and oversight and implementation of the Strategic Risk Assessment register was vital.
* Implementing the Financial Recovery Plan  – The Financial Recovery Plan was submitted to the Council for approval prior to March 2015 and was ready for implementation.
COST TO MAKANA
Makana paid Gomomo’s travel and accommodation costs. No salary cost because he was seconded from Cogta.

WHO Ted Pillay
FROM He is the Manager of Sarah Baartman District Municipality
STATUS Acting Municipal Manager
MANDATE
* Oversee the appointment of a permanent municipal manager
* Develop a turn-around plan for the municipality focusing on the deteriorated state of (among others) Water, Sanitation, Roads, Refuse and Finance. Compile a three-month exit plan report.
STARTED 1 February 2018
FINISHED
Council says he will remain until a permanent municipal manager is appointed. Business and civil society stakeholders have said he should remain during the tenure of the new MM to ensure continuity.
HIGHLIGHTS
* Has engaged actively with a broad range of stakeholders in Makana and through open communication and action has begun to rebuild trust.
* According to Council’s Speaker, he has introduced a culture of accountability and discipline among the workforce
* Has provided a crucial executive link with provincial and national Treasury and other structures
* Councillors along with business and civil society vowed they would throw their weight behind Pillay’s work to fix systems and structures
LOWLIGHTS
Business and civil society stakeholders believe Pillay needs to remain at the core of the Cogta intervention processes and remain in support of the new MM for a significant period.
COST TO MAKANA
Travel and accommodation costs. No salary cost because he is seconded from the District.

WHO Department of Co-operative Governance and Traditional Affairs Intervention Team under Cogta Minister Dr Zweli Mkhize.
STATUS Capacity building
STARTED May 2018
FINISHED
No end date given. The GBF has called for the technical expertise promised in the areas of infrastructure and management to remain in the municipality for at least 24 months, and for support to remain when the municipal manager is appointed.
HIGHLIGHTS
Minister of Co-operative Governance Dr Zweli Mkhize introduced a high-powered delegation to Grahamstown stakeholders on 4 May, emphasising that many were Directors and Deputy Directors in the Department.
LOWLIGHTS
The Department has kept coy about exactly who is being deployed and how long they will remain here.