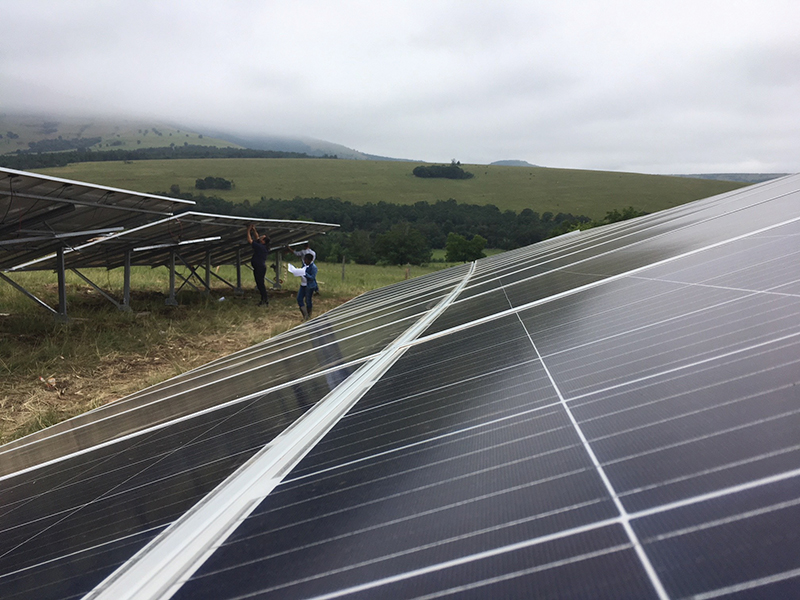 A breakthrough energy project, a minigrid generating 75 kilowatts of energy, driven by the Eastern Cape government and its German Lower Saxony government counterpart, is set to bring development opportunities to a remote village of Upper Blinkwater forward by a decade.

At the celebration this week, Eastern Cape premier Phumulo Masaulle and Germany Lower Saxony State prime minister Stephan Weil explained the project is the first of its kind in terms of the technical and institutional model for rural electrification in South Africa.

The flagship project of the twinning arrangement between the two governments which is expected to bring about numerous socio-economic benefits to a 100 or more strong community, is underway and will become operational towards the end of 2018

“With this mini-grid project we want to improve the living conditions and opportunities of development of the people in the rural areas of the Eastern Cape. Hence, we want to give the rural population a better future – economically and socially,” said Weil.

Masaulle pointed out that the project is remarkable because this village will be electrified 10 years earlier than expected.

“This means a whole generation will now benefit from life-improving opportunities,” said Masaulle.

The MEC for Economic Development, Environmental Affairs and Tourism (DEDEAT) Sakhumzi Somyo, whose team, together with German partners, was instrumental in driving the project, explained: “That’s why this project is so important to the province because it microcosm of how enabling energy is to our province and testament to the province’s vision to pursue an environment that promotes sustainable energy and livelihood development.”

Meanwhile, Prime Minister Weil said: “The province of Eastern Cape and the state of Lower Saxony look back on 23 years of solid cooperation. The pilot project “Mini-Grid” in Upper Blinkwater is an excellent example for our agreements being filled with life.”.

Somyo was upbeat about what the mini-grid in the village near Fort Beaufort means for South Africa and the inroads it is making in creating a revised energy vision. “The timing is perfect for the Eastern Cape to showcase a workable model for replication and integration into policy discussions as the integrated energy and resource plans are being fast-tracked.  Beyond this project, the Eastern Cape is already a significant player in the energy revolution, particularly in renewable energy.”

Yuliana Baranova from DEULA Nienburg, an agricultural training centre in Lower Saxony, said the mini-grid is expected to be catalyst for other kinds of local livelihood. Already new jobs have been created.

Said Neliswa Gaju who has already been employed:  “There are a lot of job opportunities to this project.  As a woman, we do equal work with the men, and we are, as women, also part of the project and employed,”.

Speaking on behalf of the Eastern Cape Rural Development Agency which is a co-funder of the project, CEO Thozi Gwanya reiterated that it is about creating very real opportunities for the people of the village, with high-quality local energy acting as the catalyst.

Everyone was however, clear that the reason for the project success was the the engagement of community and the development team and in particular, the Raymond Mhlaba Local Municipality.

Said Mayor Bandile Ketelo: “the honour of our municipality and community being the first municipality to have a minigrid licensed, constructed and operated within its boundaries is testament to meaningful collaborations that deliver what communities want and need”.

The challenges for the project will include generating revenue for battery replacement despite an 10-year horizon, how to manage the diesel, the spares and stores inventory, an influx of new community members, regulating the timing of energy usage and land tenure.

Further project partners include other Eastern Cape provincial departments, several government developments, research and funding agencies as well as the universities of Fort Hare and Nelson Mandela, and the East London IDZ.

The German partners included the State of Lower Saxony, Germany and GIZ (SAGEN), and other skills and technical support agencies.

The project team is also in the process of securing funding for projects for the productive use of energy. These include potable water, a dipping tank and irrigation and infrastructure for a community garden.