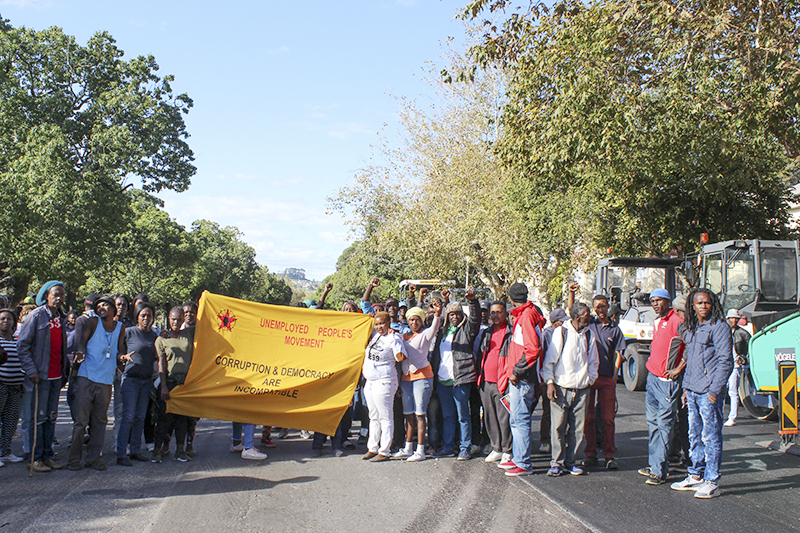 Members of the Unemployed People’s Movement gathered in protest Thursday 19 April at the current site of repairs to Beaufort Street. Photos: Sue Maclennan

Around 50 members of the Unemployed People’s Movement marched in protest Thursday afternoon 19 April to the current site of Sanral’s Beaufort Street road-repair project.

The project is the outcome of the Mayor’s August 2016 request to the South African national Road Agency for assistance in repairing the badly potholed 9km section of road.

However, UPM members expressed concern that non-Grahamstown residents had been employed on the project.

One of the leaders of the protest, Thembela Gqasana, spoke to Grocott’s Mail at the site.

“The biggest problem in Grahamstown is unemployment,” Gqasana said. “Councillors and the ward committees don’t involve the entire community when it comes to selecting people for jobs on projects. Instead they employ their relatives, friends and girlfriends. That’s why the same people get employed on projects every time.”

Most of the the protesters, he said, came from Ward 7 (Extension 7, Extension 6, 25 Size, Lingelighle and Ethembeni). However, he said protesters had also come from wards 2, 7, 9 and 10.

Gqasana said the group had met with municipal leadership to outline their grievances, and had insisted that work on the project be halted until after discussions set for 9am today (Friday 20 April) at the City Hall.

Responses to Grocott’s Mail’s request for comment from Sanral and Makana Municipality had not yet been received at the time of publishing and will be included in a subsequent web update.