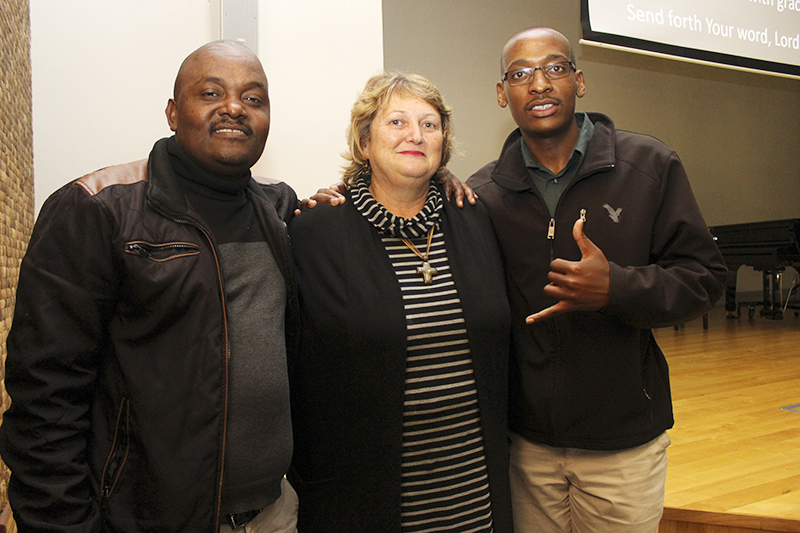 Mission setup co-ordinator for African Enterprise Siphiwe Sibiya with Grahamstown co-ordinators Ronel Mostert and Lester Sigauke at NELM this week, where they addressed partners on an interdenominational mission in Grahamstown that starts at the end of this month. The opening rally in the City Hall on 28 April will launch some 40 events in the city, focusing on reconciliation, with the closing rally in the Indoor Sports Centre on 6 May. Story inside. Photo: Sue Maclennan

Missions organisation African Enterprise is partnering with Grahamstown churches in a week-long blitz of evangelism on the city’s streets. The opening rally in the City Hall on 28 April will launch some 40 events in the city, focusing on reconciliation and practical action, with the closing rally in the Indoor Sports Centre on 6 May the grand finale.

“It’s going to be like we’re crazy,” Sibiya, an ordained Anglican priest, told the leadership gathering. “We’re going to reach every stratum of society. We’re going to be on every street corner, in every part of the town.”

He said AE seeks to support local churches rather than develop its own following.

“This is not our city, it’s your city,” he said, explaining that practical action was an important part of their ministry. Sibiya and his team had earlier visited the Eluxolweni youth shelter and a delighted Jane Bradshaw, the centre’s manager, heard that through their contacts they had already managed to source a desperately needed washing machine and drier, as well as soccer boots for the children.

“We walk the talk,” Sibiya said.

A reconciliation march on 1 May will start in Fingo Village and end in the City Hall, and Sibiya encouraged residents from every part of the Grahamstown to join in.
“Reconciliation is a two-sided problem,” he shared. “Some don’t want to forgive; others don’t want to ask for forgiveness.”