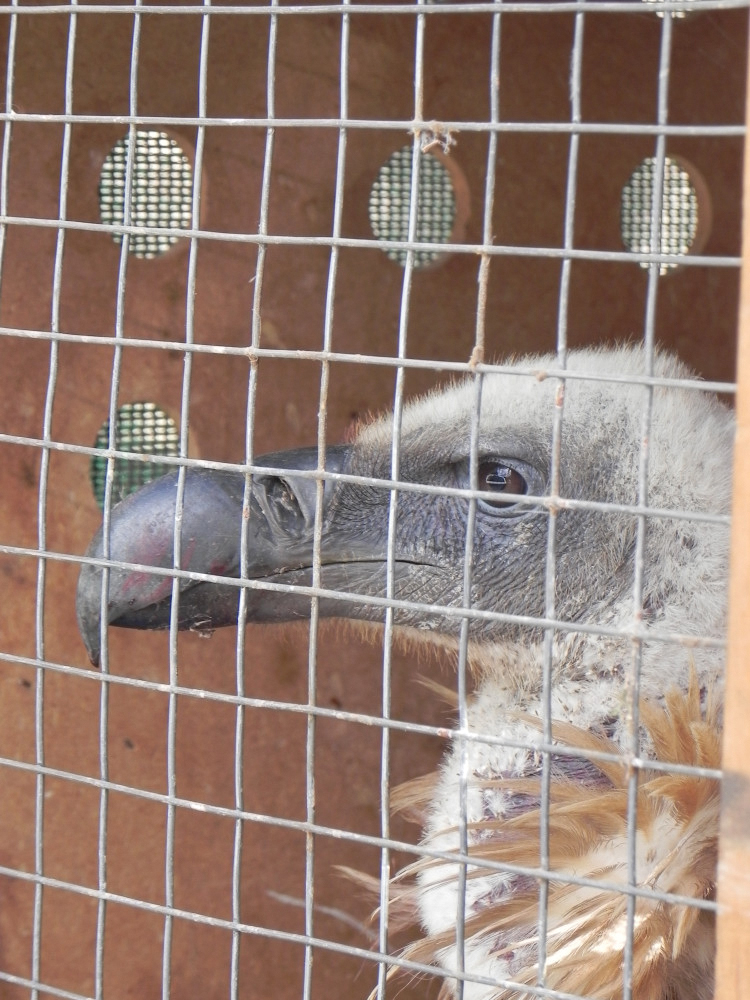 On the 10 April 2018, VulPro was informed that one of their tagged vultures, Cape Vulture (CV) 283, was in trouble in the Molteno district of the Eastern Cape.

When collected on the 11 April, this bird was found to be yet another survivor of an electrocution on the Eskom grid network. However, the site where the bird was collected as well as the tagged information, is of huge concern for the plight of Cape Vultures in the Eastern Cape.

CV 283, was a bird that had previously skipped wing damage from contact with  transmission lines in the Burgersdorp area on the 28 February 2017. She, a young Cape Vulture, was duly relocated to VulPro in the North West province to recover and was later released with wing tags no 283, from the Magaliesberg Mountains.

Remarkably, a year later this young bird found her way back into the Eastern Cape but what makes this so tragic, is that she was found a mere 0.8km from the nearest wind turbine on a wind farm, alive but electrocuted with a badly burnt and maggot-infested wing! The Eskom network of power lines are known to have detrimental impacts on vultures with the Eastern Cape being no different. The alarming fact is that these birds are now dicing with these monstrous wind turbine blades of the ever increasing wind farm developments taking place in this province. With the increased number of wind farms, so do the power lines multiply. Vultures in Africa are decreasing at an alarming rate with multiple threats causing a steep decline in their numbers. Many of the species have declined by over 80% in the last 30 years. Possibly the biggest threat to vulture survival in South Africa are power lines. Cape  Vultures are classified as endangered with just 4200 breeding pairs left globally. The Cape Vulture is the only endemic vulture species to southern Africa and has already become extinct as a breeding species in Namibia, Zimbabwe and Swaziland. With the added potential of wind farm deaths, will the Eastern Cape follow suit?

A large percentage of Cape Vultures affected directly by the Eskom grid go unnoticed and the small percentage that do survive end up at VulPro, unable to be released into the wild again.

VulPro will continue to tackle conservation of African vulture populations for the benefit and well-being  of society. However, we also expect that development in the wind power industry take heed of the precarious position these birds hold in the Eastern Cape. For more information, contact Kate Webster (082-702- 5942) / E-mail: kate@lcom.co.za or Kerri Wolter (082-808-5113) / E-mail kerri.wolter@gmail.com.