Between illumination and devastation 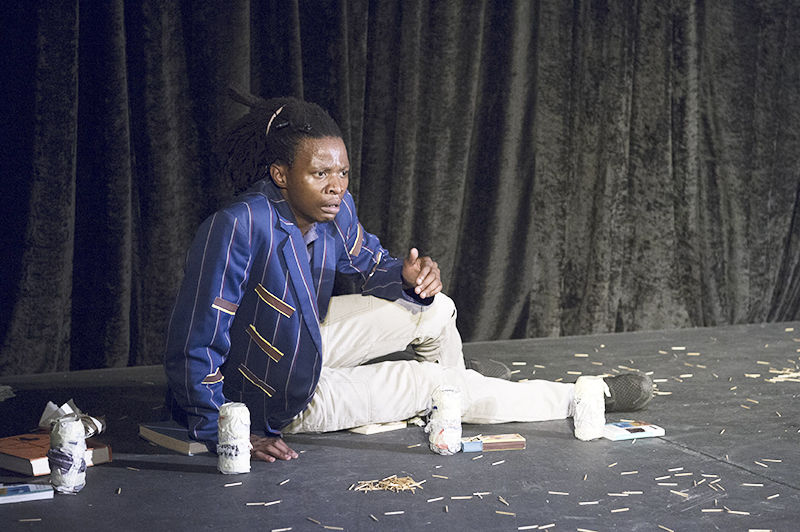 Fire can be helpful or harmful. Fire provides warmth: heating homes, cooking food. It’s a symbol of passion, of feeling, of spirit. Controlled, it’s an enormous asset; but an uncontrolled fire runs rampant, turning into a lethal, destructive force.

We come to a stage strewn with books, candles, tyres. The candles become prison bars, the tyres become podiums. The performer’s suit has strips of matchboxes sewn into it, so that he can strike a flame from his body itself, interlacing the metaphors of his passionate commitment with the actual fires started by protesters. I enjoyed the searing, startling (frequently funny) poetic images as his language dances around its theme, finding connections between texts and flames in all sorts of unexpected places.

Ngubelanga is a gifted writer and manages a good range as a performer, effortlessly moving between a variety of characters in vignettes including an unnamed VC, a “model C school” student leader, and a dog (signifying the lapdogs of the university and the Askaris back in the day). The narrative rapidly takes us through many different scenes in the tradition of Woza Albert, replete with the broadly exaggerated horrible Afrikaner authority figures. Ngubelanga is not only satirical about the university management and the apartheid police, he also ribs student protestors repeatedly insisting on – but also confused about –their “action plan.”

Where Ngubelanga really comes into his own is in his role as the drunken father, telling the story of his arrest on the way to protest Biko’s incarceration in 1977. This key character is both comical and tragic. One minute we’re laughing at him, and the next, feeling for his broken mouth, as the arresting officer commands him to “pick up his teeth” which have been beaten out of him. In the character as his father, Ngubelanga makes the point that a fire illuminates, but a page from a book also illuminates. However, when the page of writing comes into contact with the flame, the flame wins every time. This reminded me of a story from Osho about a rose and a stone. Something delicate and complicated and difficult will always be destroyed by something blunter. The rock will always crush the flower.

Xolisa Ngubelanga doesn’t provide easy answers, but he does attempt to redeem the past, to find hope in struggle and defiance, linking the 1977 protest in PE against Biko’s incarceration with the fires started during the university protests of 2015-2016. His text includes many memorable lines begging to become slogans. For example, the last lines: “We didn’t start this fire, we inherited it. This is an old fire.”
(The audience took up this refrain at the end, and somebody called out “we didn’t start this fire”.)

Flamebook is part of a recent movement of revolutionary theatre works, many of which fed into the “Disruption” theme of last year’s festival. Xolisa Ngubelanga lists himself on Facebook as working at Chief General Security Officer of Colonial Legacy and it is clear that a revolutionary zeal burns in his text. Other recent plays which are part of this trend include Ameera Conrad’s collaborations, The Fall (2016) and Reparation (2017), as well as Jake Nathane’s Welcome to the Zoo (2017) and Thembela Madliki’s Bayephi (2017). The Young Artist Award Winner Monageng ‘Vice’ Motshabi’s Ankobia also addressed issues of injustice and resistance.

These productions are part of a rapidly developing brand of new protest theatre which revives the revolutionary ethos of anti-apartheid works, but focuses it on
contemporary injustices and inequalities. These are plays which present a call to arms, and which are finding ready and sympathetic audiences.

I opened this review with the idea of fire as multifaceted and complex, as both
positive, beneficial, helpful, as well as destructive. In the play these dual meanings intersect. On the one hand, fire represents fervour and spirit (“the fire leapt out of our chests”), but then it also becomes actual, uncontrollable, destruction (“and on to the buildings”). In this same image both aspects inherent in the nature of fire are present, both passion and destruction. Fires are easily started, but if they’re not controlled, everybody gets burnt.