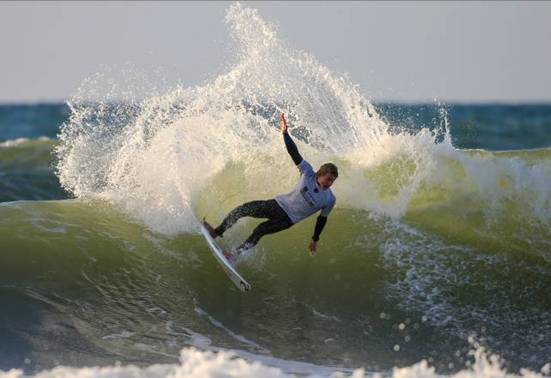 Matt McGillivray (Jeffreys Bay), currently No. 8 on the WSL Qualifying Series rankings, is looking forward to competing in his home surf during the 2018 WSL Africa events. Photo: Supplied

The African continent’s most lucrative year of professional surfing will be launched in Port Elizabeth over the Easter weekend when competitors in the Volkswagen Nelson Mandela Bay Surf Pro presented by Billabong take to the surf at Pollock Beach on Friday.

Taking place at locations that range from Lamberts Bay on the West Coast to Ballito on the East Coast, and including events in Morocco  (co-sanctioned with WSL Europe) and the first-ever World Surf League (WSL) event in Dakar, Senegal, the 14-event schedule offers total prize money exceeding R18 million.

Comprising events for men, women, junior (18-and-under) men and women and longboard men and women, the WSL Africa tour provides local surfers with the opportunity to accumulate prize money and coveted WSL Qualifying Series (QS) ranking points in their home surf without having to incur exorbitant international travel costs. The points earned enable them to qualify for and gain preferential seeding in major international events.

The season starts with the VW Nelson Mandela Bay Surf Pro which runs from Friday to Monday, 30 March to 2 April. The tournament features a QS 1,500 rated event for men, a QS 1,000 for women and Junior Qualifying Series (JQS) 1,000 events for men and women. The prize-purse totals R200,000 and it is the first of five events in the City Surf Series (CSS).

Next up is the inaugural running of the Royal St Andrew Port Alfred Classic presented by Quiksilver (April 5-8) which sees the WSL re-visit the great waves at the mouth of the Kowie River in the Eastern Cape for first time in more than two decades. Along with QS 1,000 events for men and women, the event re-introduces Longboard Qualifying Series (LQS) events for men and women with the top performers going on to qualify for the two WSL World Longboard Championship events in Papua New Guinea in October and Taiwan in November.

The action moves to the Western Cape in June for the third annual Vans Surf Pro Classic at the iconic fishing village of Lamberts Bay on the West Coast, which runs June 1-3 with QS1,000 men and women’s events and a JQS 1,000 men.

Next up is the fourth stop on the CSS, the Jordy Smith Cape Town Surf Pro presented by O’Neill (Jun 14-17), that uses a mobile event format to find the best waves on the Cape Peninsula for QS 1,000 and JQS 1,000 men’s and women’s events.

The grand finale of the 2018 CSS, the Volkswagen SA Open of Surfing presented by Hurley (Jun19-24), will also use a mobile venue format in Port Elizabeth to determine the winners in a QS1,500 men’s event and the first QS 3,000 rated women’s event, the biggest QS women’s contest to be run in the region, alongside JQS 1,000 and LQS 1,000 men’s and women’s events.

There will be no break in the action with the junior men and women back in the surf zone at Willard Beach in Ballito for JQS 1,000 events in the Billabong Junior Series (Jun22-24), followed immediately by the men and women who will be competing in the historic 50th edition of the world’s longest running professional surfing event, the Ballito Pro presented by Billabong (Jun 25-1 Jul).

The men’s event, with the highest available rating of QS 10,000, will again attract more than 100 of the world’s best competitors for a feast of world class action in the mid-winter warmth of KwaDukuza. The handful of South African qualifiers will be determined to emulate compatriot Michael February (Kommetjie) who charged his way to third place in Ballito last year, which contributed significantly to the Capetonian securing a spot among the world’s top 34 ranked surfers on the elite WSL Championship Tour (CT) for 2018.

The world’s top 34 ranked male surfers, including February and perennial title challenger Jordy Smith (Durban), return to Supertubes in Jeffreys Bay in July for the Corona Open J-Bay, the sixth of 11 stops on the 2018 CT that determines the annual World Surfing Champion. They will be joined by the top 17 female CT surfers for the first time since 2000 with the men’s holding period running from July 2-16 while the women’s runs July 6-16.

Negotiations are at an advanced stage for the sanctioning of the first WSL event to be staged at Dakar in Senegal, the westernmost city on the continent. Currently listed as ‘Tentative’, the event will be QS 1,500 rated for men and women and will run August 29-2 September.

The final WSL Africa event of 2018 for men and women is the Anfaplace Pro Casablanca in Morocco from September 4-9. Co-sanctioned by WSL Africa and WSL Europe, the event in Casablanca offers QS 1,500 rated events for both men and women.

The juniors’ season wraps up at the Billabong Junior Series event at Cape St Francis where the 2018 WSL Africa Junior Series Champions will be decided, and the squad of four men and two women who will represent the region at the WSL World Junior Championships in Australia in January will be announced.

The WSL Africa region also hosts the Cell C Goodwave, a unique one-day specialty event with a holding period that runs from 1 January to 31 Decemberwhile organisers wait for ideal surf at New Pier in Durban. The star-studded 24-man invitational field competes for a prize-purse of R200,000 with the winner pocketing R120,000.

Long-serving WSL Africa Operations Manager, Colin Fitch, who has instigated, coordinated and implemented the incredible growth in the regional tour over the past decade, is anticipating yet another year of exciting events.

“I’m both happy and excited to see the WSL Africa Tour growing in 2018,” says Fitch. “While the upgrade of the Volkswagen SA Open of Surfing presented by Hurley women’s event to QS 3,000 status will ensure that many of our female members get the chance to compete against the top international surfers, the inclusion of two WSL QS longboard events for men and women is also a great boost for the region.

“In June the QS 10,000 Ballito Pro presented by Billabong will celebrate the 50th edition of the world’s longest running professional surfing event with Shaun Tomson, South Africa’s first World Surfing Champion and a six-time Gunston 500 champion, headlining the festivities. And with a QS 10,000 and four QS 1,500 men’s events scheduled here for 2018, we hope to see many more of our African surfers steadily moving up the QS rankings.”

The five events making up the City Surf Series will each host activities coordinated by Surfing South Africa, the national controlling body for the sport. These will be run by SSA Development Officer, Danielle Powis, in the various locations. The activities are designed to foster and encourage surfing among young people, regardless of their background.