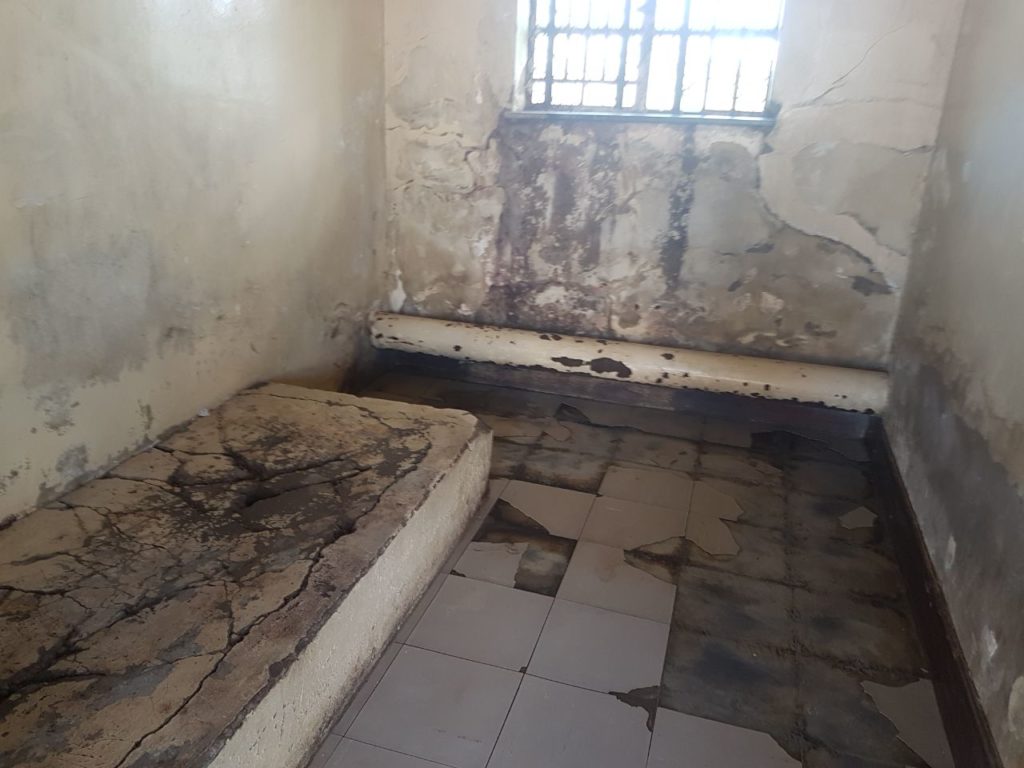 Patient room in ward 6B on 12 March. Photo: DA, supplied.
The details of the disclosure should be investigated – not the person who made the disclosure.

Public service watchdog PSAM has called on the Health Department to support whistleblowers with patients’ interests at heart. Meanwhile, claims have emerged of a cover-up at Tower Psychiatric Hospital, after media reports of alleged poor treatment of patients. Kathryn Cleary reports.

A report in City Press and Rapport on 4 March 2018 presented shocking images of an isolation cell at Tower Psychiatric Hospital in Fort Beaufort. Former Tower psychiatrist Kiran Sukeri spoke out about alleged degrading and inhumane treatment of patients and said forged death registers meant an alarming number of patient deaths at the hospital in recent years had gone unrecorded. Sukeri’s claims were refuted by the Department of Health in the Eastern Cape.

“I know what I’m going to tell you will jeopardise my safety, as well as that of my family, but I don’t care: those patients urgently need to be helped,” he was quoted saying in the article, ‘Eastern Cape’s ticking psychiatric time bomb’.

“Too often, public servants face unfair consequences as a result of speaking out,” Kruuse said. “The position of PSAM when it comes to whistleblowers is [that]we need the Department of Health to uphold the Protected Disclosures Act.”

In 2000, the South African government introduced the Act commonly known as the ‘Whistleblower Act’.

It outlines procedures for private and public sector employees to disclose information about unlawful or irregular conduct by their employers or fellow employees. The Act protects employees who make a disclosure which is protected in terms of the Act.

“When a nurse, or a doctor, or any person providing medical care makes a disclosure, they should not be subject to occupational detriment for making that disclosure,” Kruuse said. “It’s high time the Department shows it can actually protect those who have the interests of patients at heart – those ensuring health care is provided in a way that is adequate and responsive to their needs.”

Kruuse explained what kinds of disclosures were protected.

“If you speak out as a health provider and say that a standard of care is endangering the well-being of that patient, that’s a protected disclosure,” Kruuse said

“In many cases the public servants have raised their concerns with their seniors, and there has not been adequate action taken to address those concerns.”

Sukeri’s claims were refuted by Eastern Cape Department of Health Spokesperson Sizwe Kupelo. Kupelo, along with MEC Pumza Patricia Dyantyi paid what he described as a surprise visit to Tower Hospital, two days after the publication of the Rapport article. Kupelo later stated that all was in order at the institution and that the MEC could find no evidence of anything Sukeri had said.

Following the visit, Kupelo announced that an independent task team had been dispatched to further investigate the conditions at the hospital.

Claims of a cover-up

They will chase you – but at the end of the day, I’m speaking about what has been hidden
at Tower

However, soon after the MEC’s visit, reports began to emerge of a flurry of activity the night before, in what various sources alleged was a cover-up.

In an article on 11 March, Rapport quoted National Education, Health and Allied Workers Union (Nehawu) branch chairperson, Lawrence Mtsila, stating that Tower staff had been instructed to clean the premises the night before the MEC’s visit. And in an official statement on 14 March, the DA’s Shadow MEC for Health Celeste Barker declared that “deception at Tower Hospital must be investigated”.

“The DA is deeply disturbed and concerned about the well-choreographed show that was presented to a DA delegation that visited the Tower Psychiatric Hospital in Fort Beaufort on Monday 12 March 2018,” Barker said in the statement. “It became clear to us that the hospital was cleaned up and prepared for the visit.”

Barker and the DA’s Shadow Minister of Health, Patricia Kopane, toured the institution with its upper management.

“We were escorted to a ward filled with state-of-the-art new beds,” Barker said in the statement.

“Much to our surprise, we found a linen room filled with new-looking garments, more sheets and clothing than I have seen in bigger hospitals and full fridges with separate storage for meat, milk, fresh produce, eggs and shelves packed with loaves of bread.”

The DA delegation found the single rooms to be empty, in contrast to the shocking photograph published in Rapport’s original article. The delegation was told the rooms were not used by patients as “they do not meet Mental Health Care standards or the standards of SASOP and the locks are broken”.

Kupelo has been approached for comment regarding the DA’s findings and alleged cover-up but has not provided a response at this time.

Grocott’s Mail spoke to Nehawu branch chairperson Laurence Mtsila after the DA’s visit. Mtsila, who works at the hospital, confirmed the National Health and Allied Workers Union’s allegation of a cover-up in preparation for the MEC’s visit.

Mtsila told Grocott’s Mail that staff had been instructed to work alongside CEO Ntombizandile Ngcume, cleaning from top to toe the parts of the hospital that would be visited. This included bringing beds into a disused ward and removing patients from the single cells and transferring them to that ward. He also confirmed “long-term” use of the dilapidated single rooms for overflow patients.

Mtsila said the union was very concerned at the exit of professional staff from the hospital.

“In 2016, 31 people resigned – most of them because of the interference of the CEO in their duties,” he told Grocott’s Mail. In the first three months of 2018 there had already been eight resignations. Three of those, including Sukeri, had been doctors.

Nehawu expressed concern that there was no doctor on duty during the weekends, and confirmed that following Sukeri’s resignation, Tower Psychiatric Hospital had no full-time psychiatrist.

Mtsila said the union was worried about the institution’s intolerance for whistleblowers.

“When you speak up about something that is wrong, the management takes you as someone who is trying to have them blacklisted.

“They will chase you – but at the end of the day, I’m speaking about what has been hidden at Tower.”

As a result of the allegations, investigations are currently under way by the Department of Health and the South African Human Rights Commission.

Mtsila confirmed to Grocott’s Mail that Nehawu had co-operated in the Department’s investigation. “We were interviewed as the union. I would say the procedure was free and fair.”

Grocott’s Mail will continue to report on further developments of this story. A patient room in ward 6B of Tower Psychiatric Hospital in Fort Beaufort. Photo originally published in Rapport.