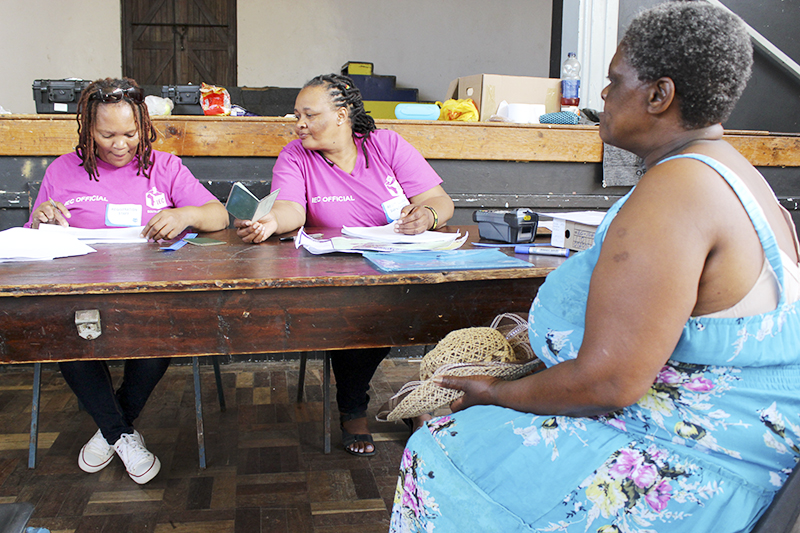 Jackie Maceba (blue dress) is assisted to check her voter registration details at the Recreation Hall in Albany Road on Sunday 11 March. The IEC officials declined to give their names. Photo: Sue Maclennan

A total of 2 767 139 citizens visited their voting stations over the past weekend to either register as new voters or to update their registration, making this one of the busiest voter registration weekends in recent years, the Electoral Commission of South Africa said yesterday in a statement. In Makana, voting stations were quiet with no incidents reported.

While the IEC said the Eastern Cape is the province with the highest level of registration at 87%, party agents in Grahamstown reported slow attendance at local voting stations over the weekend, which were opened for those eligible to register as voters or check their recorded addresses and other details were correct.

Voting stations that Grocott’s Mail visited were quiet, with party agents at two reporting fewer than 100 people trickling in on each day.

Although in the lead-up to the weekend, Friday saw Fingo Village residents block roads with faeces and burning tyres in protests against the bucket system, no incidents such as the service delivery protests that disrupted registration at other centres around the country were reported in Grahamstown.

Police spokesperson Captain Mali Govender told Grocott’s Mail, “There were no incidents reported in the Makana area during the voter registration weekend.”

A total of 2 767 139 citizens visited their voting stations over the past weekend to either register as new voters or to update their registration, making this one of the busiest voter registration weekends in recent years.

Of the 2.76 million voters who visited their voting stations this weekend:

Of the new voters registrations, over 400 000 (or 82 percent) were under the age of 30 and approximately 54 percent were women.

The province of Gauteng saw the most new registration at 23.69 per cent followed by KwaZulu Natal with 18.78 per cent and the Limpopo with 17.03 per cent.

The voters’ roll now stands at 26 250 939 voters which is estimated to be approximately 75 percent of the eligible voting population based on Statistics South Africa voting age population estimates.

With the results of the registration weekend factored, the Eastern Cape is the province with the highest level of registration at 87 per cent followed by the Free State at 82.2 per cent and KwaZulu Natal, Limpopo and Northern Cape at 79 percent. Despite the high number of new voter registrations over the past weekend Gauteng has the lowest overall registration at 67.3 per cent.

The online facility at www.elections.org.za and our App remain available 24 hours a day for registered voters to check and update their address details. The average duration spent online or on the app is just less than 6 minutes.

It is estimated that approximately 300 000 who visited voting stations are among the 2.8 million voters for whom the Electoral Commission did not have an address going into the weekend. The completed registration forms will now be scanned and all demographic and address details captured over the coming weeks to determine the final impact on this aspect of the voters’ roll.

In terms of provincial breakdown of the registration activity, the most populated provinces predictably had the highest participation with KwaZulu Natal recording 558 728 interactions with voters (20.19 percent) followed by Gauteng with 517 703 (18.71 percent) and the Eastern Cape with 460 168 (16.63 percent).

Weekend registration activity at voting stations saw participation double on Sunday with 1.8 million recorded interactions compared to about 955 000 on Saturday. This is in line with previous trends during registration weekends.

The Electoral Commission of South Africa said this registration weekend was evidence of its early start to its preparations for the 2019 elections, expected to take place between May and August 2019.

“Critically, this registration weekend is a milestone towards the culmination of a two-year project to obtain addresses for all registered voters by June 2018. It is also an opportunity to ensure that voters are registered in the correct voting district segments.”

Despite isolated disruptions in certain areas, the IEC said it was pleased that most incidents, which had affected registration operations on Saturday had been resolved, and almost all voting stations had been operational on Sunday.

Service delivery protests disrupted stations in the Western Cape according to a report in IOL and IEC spokesperson Kate Baphela said in a statement that seven voting stations in Gauteng were disrupted, as well as in Nthabankulu in the Eastern Cape.

In QwaQwa and Harrismith in the Free State, residents had destroyed tents erected as temporary voting stations, and another had been stolen.

“The Electoral Commission would like to express its appreciation to community leaders, political leaders and traditional leaders, as well as the community members themselves for their assistance and support in ensuring voter registration activities could continue in almost all areas today,” the IEC said yesterday.

“The Electoral Commission would also like to express its thanks to the security agencies, including the South African Police Service and various municipal police departments for their assistance in ensuring the safety and security of voters and our staff over the weekend.”

The Electoral Commission believes that such a high turnout with more than a year until the next general elections bodes extremely well for participation in next year’s elections and the future of electoral democracy in our country.

IF YOU MISSED IT
* Registered voters wishing to check or revise their address can do so online on www.elections.org.za
* In Grahamstown you can visit the IEC Monday to Friday office hours – behind the LabouR Department in lower High Street.
* Call the IEC Contact Centre 0800 11 8000.

WHAT THE IEC HAS TO DO

In 2016 the Constitutional Court ruled that the Electoral Commission had until June 2018 to update the voters’ roll with all available addresses. The IEC said over the past two years the Electoral Commission had made significant progress in updating addresses on the voters’ roll including:
• Increasing the proportion of complete addresses from 34% of registered voters in March 2016 to 75% of registered voters currently;
• Reducing the proportion of incomplete or generic addresses from 34% in March 2016 to 14%; and
• Reducing the percentage of registered voters without any recorded address from 32% to approximately 11%.