Making sense of a complex environment 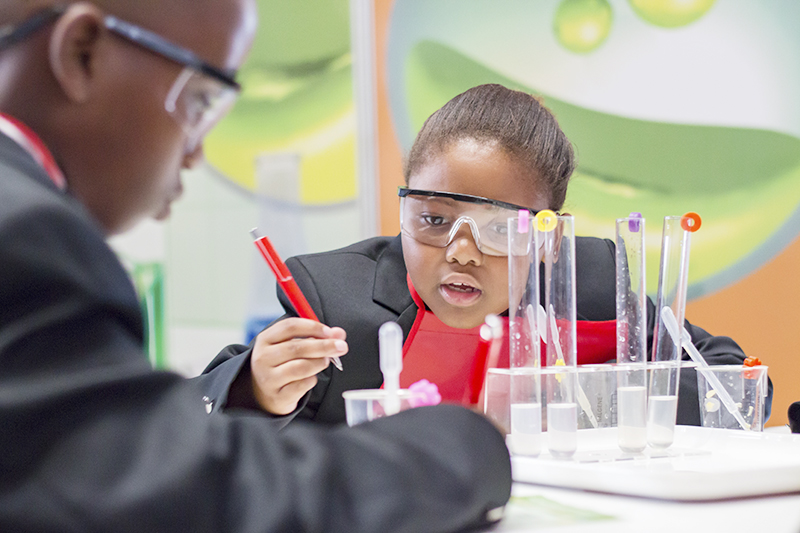 Lisa Mose offers advice as Zozi Adam records their experiment at the BASF Kids’ Lab on the opening day of Scifest 2018 on Wednesday. The Kingswood College Grade 4s were among the first of thousand of schoolchildren expected to attend the annual event that ends on Tuesday. Photo: Michael Salzwedel

Mike Bruton talks about the role of science festivals in promoting innovation.

This year SciFest is focusing on innovation with its theme, ‘Innovation 4.0’. Promoting innovation, and nurturing an ethos of creativity, is a core function of science festivals. Science festivals are events where the construction of meaning takes place and scientific and technological advances are understood in their appropriate contexts. Inventions and innovations play many roles in society. Some improve our efficiency, others soften our impact on the environment and promote sustainable living, yet others facilitate connections between people, things and institutions.

Inventors and entrepreneurs are the backbone of a country’s economic development.

Ultimately humans are ‘meaning makers’. We try to make sense of our complex environments and develop tools that ease the way. An inventor, like an entrepreneur, is someone who has the ability to identify opportunities, mobilise resources, and implement actions that take advantage of those opportunities and resources. This takes courage as they have to endure uncertainty, take risks, and break new ground. Although they are in the minority, inventors and entrepreneurs are the backbone of a country’s economic development.

The nature of inventions has changed over time with the rise of computers, the internet, information science and the digital economy. They have transitioned from being tangible devices to invisible cloud-based, digital services and apps on smartphones that engage all our senses. One positive consequence of this development is that many more people are now able to make novel and useful inventions, not just tech-literate engineers.

Increasingly, technology has become a form of social intervention, even social domination. But, contrary to many predictions, technology has not necessarily widened the digital divide as it has made it possible for more people, especially those in rural areas, to leapfrog into the information age.

This has allowed them to make or receive payments without the intervention of ‘big banks’, as well as make use of novel decision-making protocols and funding models that allow them to develop enterprises without heavy capital investment. This development has especially benefited small to medium-sized enterprises and women entrepreneurs, whose technology uptake rates are among the fastest in the world.

Science festivals have a crucial role to play by educating people about the speed and consequences of dramatic technological transitions and the impact that they will have on their well-being and on the health of the environment. They need to lay a solid foundation of understanding that will help their stakeholders to make informed decisions about the many ethical and practical issues that arise from rapid technological advances, as well as wise choices about their future lifestyles.

Science festivals also need to stress the value of ideas. All innovations and inventions are based on an initial idea or insight, and all ideas are potentially useful, whether they are good or bad. Ignoring ideas just because they appear to be wrong at the time is short-sighted as the history of innovation is full of wrong ideas that provided brilliant insights and became stepping stones to significant later inventions. Sometimes you first have to be wrong to be right. After all, it has always been the role of innovation to fly in the face of convention.

We need to learn how to fail successfully

The usefulness of an idea – whether it prompts further research and rethinking – is far more important than whether it is right or wrong.

Furthermore, no scientist or technologist has ever been right every time. Being wrong is useful as it reminds us of what we don’t know (or what society does not need). We need to revel in failure and build a society that is agile enough to respond positively to it. We need to learn how to fail successfully. After all, a failure is merely an opportunity to start again more intelligently, and the only true failure is not to learn from your mistakes.

The essence of scientific discoveries and technological advances is that they will always be short of the perfect solution and will constantly need to be rethought and re-invented – they will always be ‘work in progress’. The point is that our current discoveries and inventions, deficient as they are, have been good enough to enable spectacular advances in the quality of life of many people.

Peter Diamandis, in his recent book Abundance, has pointed out that, over the past 100 years, the human life span has more than doubled, the cost of food has dropped 13-fold, that of energy 20-fold, transport 100-fold, and communication by over 1000-fold, all of which was enabled by technology.

These and many other ideas on innovation are discussed in my latest book, What a Great Idea! Awesome South African Inventions, published by Jacana Media in December 2017.

Previous ArticleGtown Kwaito star’s legacy lives on
Next Article My garden, our livelihood

When research is for the people back home

The week the Antarctic came to Makhanda