Your Town, Our Town

US town, Grahamstown in storytelling project 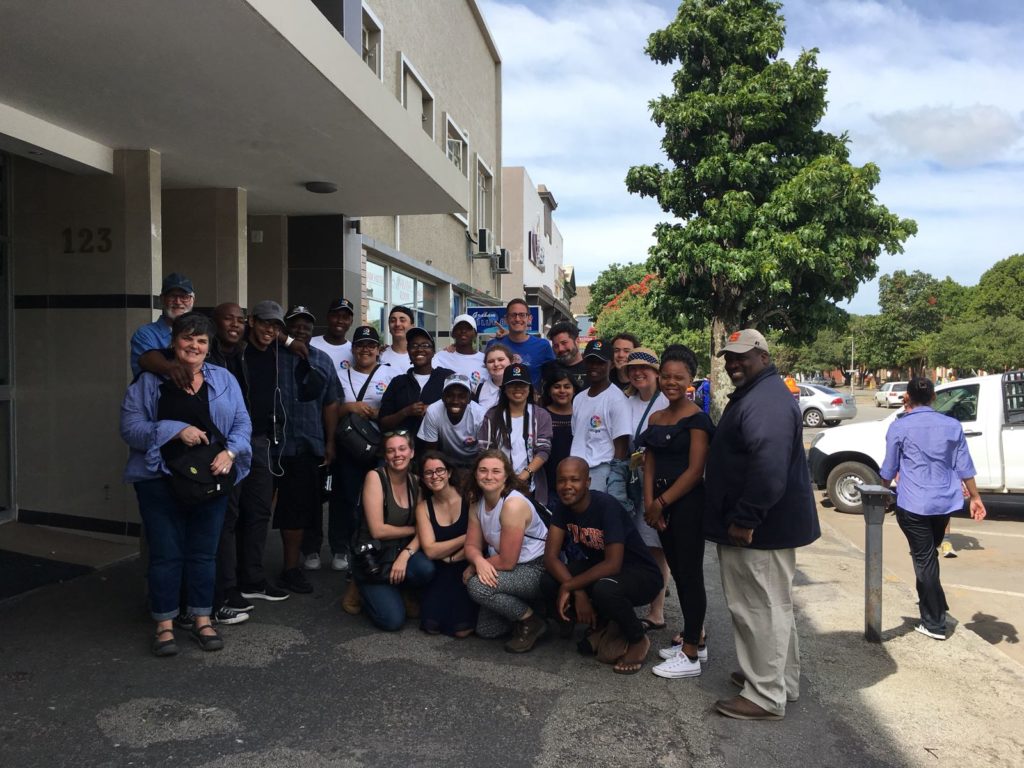 Davis and Harper worked with former Rhodes University exchange student, Jason Torreano. Though originally from the US, Torreano frequents Grahamstown due to his strong connection to Inkululeko, a youth development project based at Ntsika High School.

Inkululeko works with Grades 8-12 pupils to develop entrepreneurial skills, said Torreano. Inkululeko launched a student-run cafe on site at Ntsika as a means to further the learners’ skills. Through his work, Torreano built a collaborative relationship between Syracuse and the NGO, and accompanies these students to Grahamstown each year to work with Inkululeko pupils.

Torreano works with Syracuse due to their strong focus on mutual benefit. “There’s a real emphasis on making sure both parties are seen as having value and having something to contribute,” he said, “There’s a real sense of camaraderie”, he said. “We rely on each other to get this done.”

Together; Torreano, Davis and Harper are a positive force.

“We are here for more than cool Facebook photos”, expressed Torreano. During their time in Grahamstown, Syracuse University and City High School students worked together with community members and Inkululeko learners to create stories focussed on the theme of expression. Students attended the New Years Cup finals in Joza,various church services, and the Egazini Outreach Project as part of their project.

Content generated from their trip will be showcased on Syracuse University media platforms as a way to create positive, realistic and authentic representations of South Africa for American viewers.

“There’s not enough representation in the states of the continent of Africa”, said Harper. Harper is the Director of the Newhouse Centre for Global Engagement, and has worked in areas of West Africa as well as Palestine in the media development industry. “It’s about empowering people through skill sets to be able to speak for themselves”, he said.

Harper and Davis met with faculty from the Rhodes School of Journalism and Media Studies to discuss a potential partnership for the future. Davis highlighted that the city of Syracuse was similar to Grahamstown in that both communities suffer from socioeconomic and resource inequalities. Despite being on opposite sides of the world, these two communities have more alike than people may think.

Syracuse City High School pupil Abe Mukahal told Grocott’s Mail that he was surprised to see how similar Grahamstown was to his own neighbourhood. “Back home there’s a store thirty seconds away from my house, and here there’s a Checkers across the street!”, he said. “You wouldn’t think things would be the same in Africa.” Mukahal spent his time in Grahamstown working side by side Inkululeko learners on storytelling and interviewing skills.

After the short visit, the Syracuse group said they will be back. Torreano will continue his work with Inkululeko and returns to Grahamstown again in May with a new group of Syracuse students. Davis, Harper and Rhodes Journalism staff are working on plans for future engagement in hopes of creating change for both communities.

Grocott’s Mail will provide updates on this community partnership.

Are you a ward champion? We need you.

Makhanda, what’s going on? And what is going wrong?