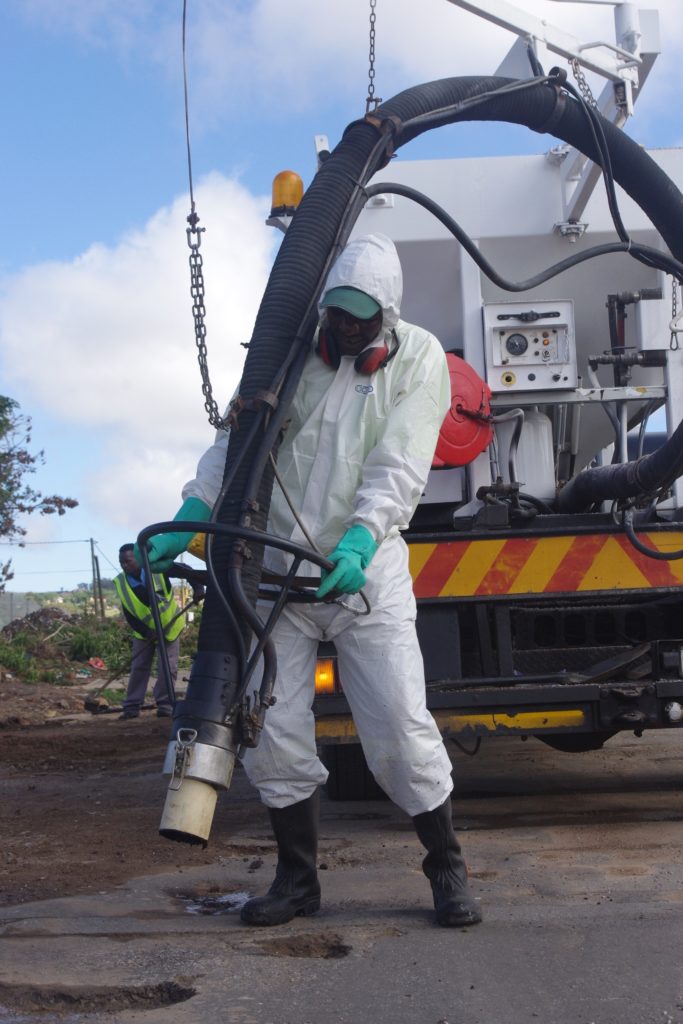 The jet-patcher at work on Albert Street. Photo: Kathryn Cleary.

As Makana Municipality announced last week it had just received R3.5 million to rehabilitate roads, a group of citizens tired of waiting had already taken matters into their own hands.

“Why must your car be roadworthy when the roads aren’t car worthy?” posed a resident on social media on 7 January. Grahamstown’s municipal, provincial and national roads are notorious among residents and visitors. Though roads ridden with potholes large enough to bathe in are the most noteworthy, many of the gravel roads leading to outlying rural areas are also in desperate need of attention. In recent months, improvements have included filling potholes and sinkholes with sand and gravel, a temporary fix.

Long term resident Martin Rushton stated, “As urgent as the need is for rain in Cape Town, so is the need for major repairs to our roads.” This week’s rainfall has worsened road conditions are consistently growing worse. The rainwater gradually washes away the sand and gravel used to fix blemishes in the roads, while runoff seeps deeper into small cracks causing dangerous erosion.

Ongoing damage to roads is only one piece of the problem. Subsequent damage to motor vehicles and scooters is a huge expense and inconvenience. Residents complained of tyre, shock absorber and wheel alignment damage as a result of driving on the roads. Charles Pretorius said he’d had two accidents as a result of potholes, costing him R75 000.

Edward Gaybba said, “My shocks are only four months old but are finished and need to be replaced. Also need to replace my Control Arm Bushes and an Idler Arm (which were all replaced just over a year ago). My family has to use caravans and a tent as we simply cannot save towards building material for our little home. Thanks Makana – apparently you think a small home, electricity, and running water is not something my family is entitled to.”

Glenn Koch from Wesson’s on High Street said that on average wheel alignment can cost R200-R600, and shock absorbers are R300-R5 000 each. Usually an annual expense, these have become quarterly expenses for Grahamstown residents. “Wheel alignment is immediately out when you hit a pothole, guaranteed, very few cars are in alignment after about two weeks of driving in town,” said Koch.

Resident Kath Barnard drives a scooter. “ I can’t think of a single road in Grahamstown where scooter drivers are safe from potholes, pothole gravel, or crumbling tarmac,” she said. Scooters are a popular among students.

With Makana failing to meet service delivery needs, Makana Revive is looking for alternative solutions. “There’s no excuse why it should have gotten to this level,” the community initiative’s Ron Weissenberg told Grocott’s Mail. Weissenberg said in the past six months, roads that were previously repairable have disintegrated to the stage where they now need total reconstruction and resurfacing.

Reconstruction of one kilometre of a two-lane road can cost an upwards of R3.5 million, Weissenberg said. Resurfacing and grading of gravel is significantly cheaper.

If every resident contributed R150, Makana Revive could fully repair salvageable municipal roads, Weissenberg said. “Professionally and with correct guarantees.” He said R50 000 would allow for nearly 800 potholes to be properly repaired by use of a jet patcher. This would come to just under R2 per citizen, less than the cost of car and scooter repairs.

“It’s criminal to allow a community asset to deteriorate to no value,” said Weissenberg.

Yesterday morning Makana Revive finally took matters into their own hands. With sponsorship from the community, the jet patcher made its way down Albert Street in Fingo Village, working to clear potholes of remaining debris and then efficiently filling them with a wet gravel mixture sourced locally from Amatola quarry. Weissenberg oversaw the patching process along with Makana Revive supporters Tim Bull of the Grahamstown Residents’ Association, Richard Gaybba of the Grahamstown Business Forum, and Mynhardt van Dyk, owner of The Rat and Parrot.

Bull said Albert Street was a priority for repairs as a main taxi route between the township and the CBD. Taxi drivers hooted in appreciation of the work being done, and volunteer traffic officers made sure passing cars did not drive over the freshly repaired road. Today (2 February) the patcher will move to the CBD, starting on African Street.

“Makana Municipality has just received R3.5 million for roads resuscitation from the equitable share. This money will be used for re-sealing and slurry seal for the main and access roads around Grahamstown. Supply Chain Management processes have already been done and requests for quotations have been advertised for this process. With the assistance from Mamlambo Construction with their equipment, the municipality will be able to do chip and spray before the National Arts Festival and most of the roads will be revamped during that period as SANRAL has agreed on revamping all the roads belonging to Department of Roads…

“The Roads and Stormwater team are currently doing pothole patching and chip and spray on the major roads damaged by heavy rains. St Andrew’s College Maintenance team have approached Makana Roads and Stormwater section and agreed to test the jet patcher machine in three main streets of Grahamstown. This is currently happening as some of these streets are being repaired. African, Milner Street and Park Road are among the streets that will be repaired using the jet patcher. Makana Brick also assisted with coldmix to do pothole patching in several streets around town.”

Should the community wish to contribute to road repairs please email jolandibotha7@gmail.com for more information.