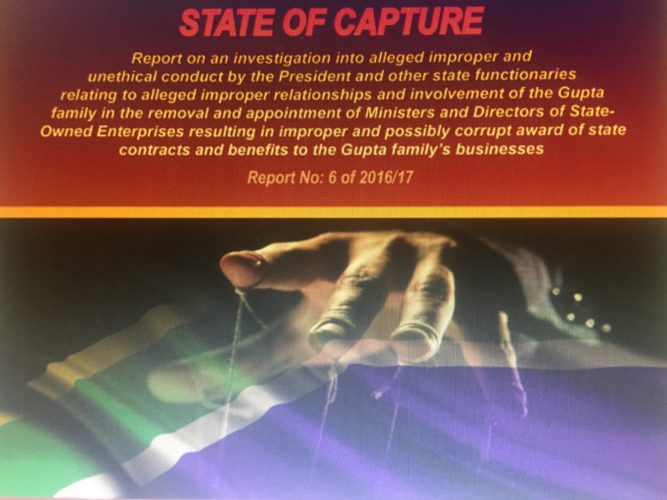 The Department of Justice and Constitutional Development has published the Terms of Reference for the Judicial Commission of Inquiry into State Capture in the Government Gazette.

The terms of reference act as a guideline for the Commission in their investigations. They were signed into effect by President Jacob Zuma on Tuesday.

“In the terms of the reference, the Commission must investigate whether, to what extent and by whom attempts were made, through any form of inducement or for any gain whatsoever influence members of the National Executive, including Deputy Ministers, office bearers and directors of the boards of SOEs.

“In particular, the commission must investigate the veracity of allegations that former Deputy Minister of Finance, Mr Mcebisi Jonas and Ms Mentor were offered Cabinet positions by the Gupta Family,” the publication stated.

The terms of reference also state that the Commission’s Inquiry must be guided by the Public Protector’s State of Capture report, the Constitution, legislation and the North Gauteng High Court order.

The order made by the court on 14 December 2017, states that the Public Protector’s remedial action was to be followed.

Other issues to be probed include whether there were any irregularities; undue enrichment, corruption in the awarding of contracts, mining licenses and government advertising in the New Age newspaper and any other governmental services in the business dealings with the Gupta family.

On 9 January 2018, President Jacob Zuma announced Deputy Chief Justice Raymond Zondo as the man to head the Commission of Inquiry.

The Department of Justice stated that the terms of reference will be followed by the release of regulations that give the Commission the legal right to conduct the investigation.

“This includes the power of the Chairperson to subpoena witnesses and of search and seizure,” said the department.

Assistance to the Chairperson in setting up the required infrastructure and resources for the Commission to carry out its work will be provided by the department.

Previous ArticlePlay your part in saving water!
Next Article FREE Grocott’s Mail – tell us what you think!