‘We want to know what happened’ 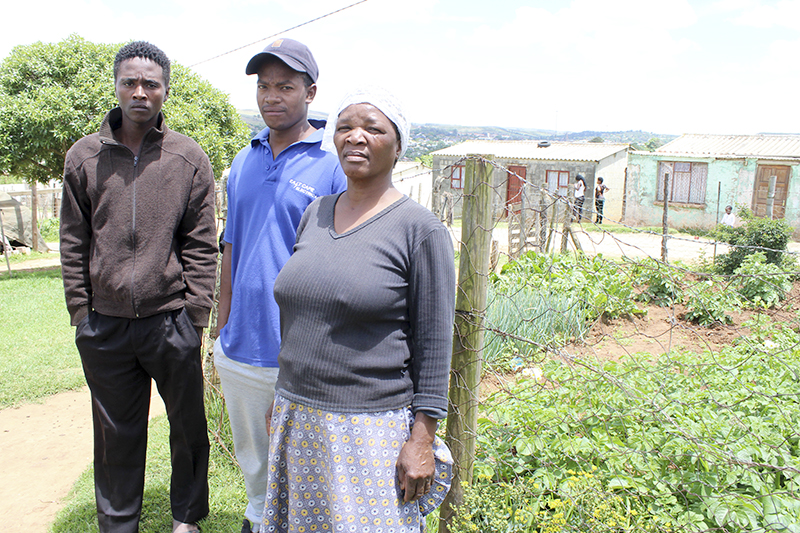 Denise Nogqala’s aunt Nokwanda Nogqala (right) who cared for her when she moved to Grahamstown from a nearby farm 12 years ago. With her are Denise’s brother Luthando (centre) and nephew Mbulelo, at their Vukani home. It’s almost exactly a year ago that her lifeless body was found left on a dumpsite at the top of M Street. The family wants to know what happened and they want justice for Denise. Story on page 3. Photo: Sue Maclennan

“Denise was good. She was funny. She didn’t like wrong things. She made people happy all the time.

“She liked to dance so much – especially pantsula. Actually we both used to do pantsula dancing – not to perform, just to be happy.”

Denise Nogqala’s brother Luthando was a toddler when he came from a farm about 30km north-west of Grahamstown to live with their aunt in Vukani. He’s now 31 and he was a teenager when his little sister became part of the household at age 10. On the farm she was Noluthando Buys (her dad Petrus’s surname) but here in town she became part of the Nogqala family and was known as Denise.

Tuesday 5 December one year ago was the morning Denise’s bruised and battered body was found dumped among a pile of rubbish at the top of M Street. Last week in the high court in Grahamstown, three young men pleaded not guilty to charges of raping and murdering her.

Denise’s family want to know what happened, and they want justice for Denise.

“She was a good person. She didn’t deserve to die. We want to know what happened,” Luthando tells Grocott’s Mail at their home last weekend. Their aunt Nokwanda Nogqala, who raised them both, wipes the nose of a toddler who has landed on her lap as she sits on the sofa.

Luthando and their nephew Mbulelo Nogqala, who is writing his matric, came to the trial last week but weren’t allowed in. Because one of the accused is a minor, the law must hold his rights as paramount and on Monday both the prosecutor, Senior State Advocate Jan Engelbrecht, and Counsel for the 17-year-old, Willem Olivier, argued for the trial to be held in camera. Judge Mbulelo Jolwana agreed, allowing Grocott’s Mail’s reporter to remain on condition we protect the younger teenager’s identity. The others are both 19.

Luthando saw his sister’s body at the mortuary and can’t talk about it. Denise’s cousin Gladys Buys breaks down in tears when she does. Grocott’s Mail spoke to her separately.

One of the young men in the family was leaving for his traditional initiation and there were celebrations at the family home, Gladys said. Denise went out to celebrate with family.

On the farm, Denise lived with her dad, Petrus Buys. He doesn’t have a phone and usually only had contact with the family in Grahamstown at the end of the month when he came to town.

“Days later my cousin phoned and said she thought Denise was murdered.” They had heard a girl had been killed in Grahamstown and had gone to the police station to make sure it wasn’t her.

“When we went we could hardly recognise her. Her head was swollen like this [shows with her hands away from the side of her head]and her face was two colours – the one side white and the other side dark,” Gladys said, and broke down sobbing.

Denise leaves her two little boys who were then just 2 and 4.

“They were always asking where their mother is,” Luthando recalled. “Also her nephews and nieces. The children loved her.”

The elder boy, now 5, has gone to live with his dad in Uitenhage. The little one lives with Petrus.

“They cried so much,” Gladys said.

Denise went to Fikizolo Primary when she was brought to Grahamstown at age 10, but quit after a few years, before she was 16. At the time of her brutal death she was 22.

“In church – the Old Apostolic Church in Tantyi – you would see her there every Sunday with her auntie,” Gladys recalled. “She was quiet – she didn’t talk a lot – but she could laugh – she liked to laugh!”

The siblings returned to the farm when they were older: Denise was employed as a domestic worker and Luthando (who now works in Grahamstown) did odd jobs and seasonal work like shearing sheep. They both came to Grahamstown for weekends with the family here.

Making their first appearance in the high court in Grahamstown last week were three young men who were 16, 18 and 19 at the time of Denise Nogqala’s death.

The case is being held in camera (no members of the public allowed) with only one relative of each of the accused allowed in the courtroom. This is to ensure that the interests of the 17-year-old, a minor, are protected. This is what the law requires and ensures the trial is legitimate.

Lindani Vamva (19), the 17-year-old and Siphamandla Futhufuthu (19) have pleaded not guilty to the alleged rape and murder of Denise Nogqala, who was then 22, on Saturday 3 and Sunday 4 December 2016.

According to both their statements, and those of subsequent witnesses, the events centred around an evening of drinking at Cool Spot Tavern in Joza.

The place where Denise was allegedly raped and murdered is the flat adjoining a nearby family home in Joza.

In his statement, Vamva says he met Denise for the first time that night, at the tavern. He says she went home with him and they had consensual sex. He says in his statement that things went wrong when the minor arrived and also wanted to have intercourse with her.

Vamva says when Denise refused, the minor assaulted her and he joined in the assault. Vamva says the minor hit her with a stick and that he (Vamva) hit her with his bare hands. “We also kicked her while she was on the floor of my flat,” Vamva says in the statement.

Vamva says he was drunk. He denies that he had anything to do with Denise’s death or that he had intended she should be killed. Vamva asks to be acquitted on the first count (rape) and that on the second count (murder) he should be convicted of assault with the intention to do grievous bodily harm.

Futhufuthu in his statement says he’d been drinking at Coolspot and arrived at the flat later to find Denise lying on the floor with blood covering her face.

He says he told Vamva and the minor they must call an ambulance and the police, that he left to fetch a cellphone from his nearby home, had an altercation there with relatives and used a knife to protect himself.

He says back at Vamva’s flat, he took Denise outside and in the course of a quarrel with the minor. He says the minor came at him with a hammer and that in defending himself he stabbed Denise by mistake.

The prosecution has named 18 state witnesses. Among the expert witnesses was Forensic Scientist at SAPS Forensic Science Laboratory in Cape Town Warrant Officer Kirstie Heynes, who had been specially flown in to give evidence on DNA analysis of samples taken at the scene.

Dwyer testified that Denise’s injuries included multiple abrasions and wounds, a broken jaw and bleeding neck muscles. Her ears and nose were bleeding and several ribs were broken.

McConnachie (Vamva’s counsel) drew out in cross-questioning that the occasion had been a pens-down (end of school exams) party and that the young men and women involved had been part of a social group called Chaos, known for their expensive tastes in clothes and liquor.

The case will resume in the high court in Grahamstown on 12 March, probably still in camera (no members of the public allowed).

The prosecution still has several witnesses to call and each of the lawyers defending the three accused will have the opportunity to cross-question them.

The two older accused, Vamva and Futhufuthu will remain in custody until the trial resumes next year, and during the trial. The minor remains in the care of a family member.