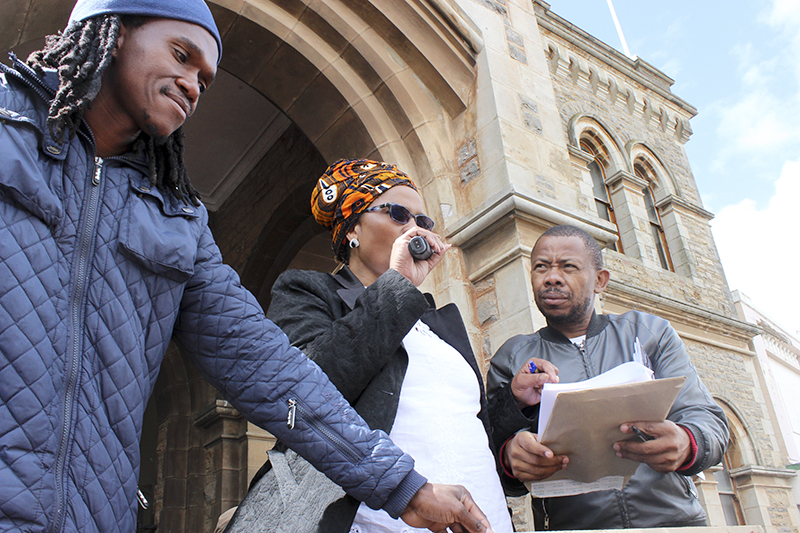 Makana Municipality has this week come under pressure from all directions, with civil society organisations rallying around service delivery and accountability demands, as the Province threatens administration and the DA calls for complete dissolution of the Council.

Around 200 members of the Unemployed People’s Movement marched to the City Hall yesterday to hand over a memorandum demanding action on a range of issues ranging from corruption and the Kabuso Report to housing allocations, poor sanitation and frequent water outages. The group, mostly women and young people who came from various parts of Grahamstown as well as Sevenfountains, gathered at Fingo Square and marched to the City Hall where individuals addressed their fellow protesters. In summary the document called for corrective action and accountable governance. Referring to Cogta’s 2015 Local Government Anti-Corruption Strategy, it called for professionalism, the efficient use of resources, accountability and transparency in Makana’s administration.

“Makana Municipality has for far too long displayed an inability or unwillingness to respect laws and strategies aimed at improving its governance so that it can deliver public services effectively, efficiently and economically. As a result, human rights are being violated and under-performing public servants and those implicated in corrupt acts are not being held accountable,” it read.

The UPM demanded a response from each arm of government on or before 30 November 2017.

Chairperson of the Grahamstown Residents Association Philip Machanick also addressed the group, calling for councilors and officials to do their jobs.

Asked by Grocott’s Mail why GRA members hadn’t marched alongside the UPM, given many of their concerns were the same, Machanick said they didn’t have details of their plan in time to discuss with their committee and develop a collective response.

“GRA was not officially part of the UPM protest but was there to show support for the Unemployed People’s Movement,” Machanick told Grocott’s Mail.

“Our main demand in the Makana financial crisis is that the system should work the way it is designed. It is not in our remit to question government policy. In fact the government’s framework for delivering services for the poor should be implemented. That includes reasonable subsidy from the wealthier parts of the community and Equitable Share grants from national Treasury that are meant to assist the municipality with servicing the poor.

“We have been working with other civil society organisations for the better part of six months on urgent action to fix the management problems in Makana and we recognise that the poor are at the sharp end of those problems.

“We will continue to pursue whatever remedies there may be to turn the situation around including working with other civil society organisations wherever we find common ground.”

The march was disciplined and peaceful. Mazwayi briefly addressed the group before signing receipt of the memorandum.

Meanwhile, the Democratic Alliance (DA) in Makana Municipality has welcomed the announcement made by the MEC for Cooperate Governance and Traditional Affairs (COGTA) Fikile Xasa, of the intention to place Makana Municipality under administration, but has called for the ANC-led Council to be dissolved entirely.

The Dispatch this week reported that Makana was one of three Eastern Cape municipalities issued with letters from Xasa, requiring them to give him reasons why he should not place them under Section 139 (1)(a) administration within 14 days to restore stability. The others are Mnquma (Butterworth) and Enoch Mgijima (Komani).

DA caucus leader in Makana Municipality Mlindi Nhanha, however, has called for Xasa to go further and not to invoke section 139(1)a, but 139(1)c, which dissolves council and call for elections in 90 days.

“We further wish to urge the MEC to appoint a properly qualified administrator with a solid track record in local government. Makana has in the past seen mediocre administrators with very limited authority and powers and their failure was forgone,” Nhanha said.

“Every street in Grahamstown has potholes and illegal dumpsites. Power cuts by Eskom hang over us on a daily basis and the municipality’s inability to pay its debts has reached unprecedented levels. The DA is looking forward to a formal announcement by MEC Xasa.”