OR Tambo Advanced The Legacy of Chief Maqoma 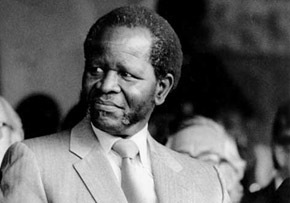 The author draws similarities between the two leaders. Furthermore, he believes that the Eastern Cape province will do well in reviving the leadership tradition that it is known for.

Throughout the month of October media outlets carried heartfelt tributes to mark the centenary of OR Tambo. President Zuma unveiled a life-size statue of OR Tambo disembarking from a plane at the international arrivals section of Africa’s largest airport named after the renowned anti-apartheid struggle icon. In his tribute Zuma, quite ironically alluded that “he [Tambo] knew that the people of South Africa owed him nothing. He led the ANC during its most difficult time”. A week earlier, 10-13 October, the Oral History Association of South Africa (OHASA) in collaboration with the Archives section of the Eastern Cape Department of Sports, Recreation, Arts and Culture (DSRAC) hosted a national conference under the theme: OLIVER REGINALD TAMBO IN MEMORIAM: REMINISCING ON A CENTENARY OF STRUGGLE, TRUE LEADERSHIP AND LEADERSHIP VALUES OF A LIBERATION STALWART. Thus, the life of one of the great leaders South Africa and Africa ever produced was brought to the attention of millions of young South Africans in order learn about this “great giant who strode the globe like a colossus” and hopefully inspire them to follow in his footsteps.

Opening the conference guest speaker and eminent scholar, Professor Somadoda Fikeni outlined Tambo’s personal attributes that included amongst others, intelligence, caring, selflessness and the ability to keep the “eyes on the prize”. Furthermore, he proclaimed that the leadership tradition that OR Tambo espoused has a long history in the Eastern Cape which is known as the ‘Home of Legends’. Indeed, OR Tambo picked up the spear of Chief Maqoma, the right-hand son of King Ngqika the ruler of the AmaRharhabe kingdom.

Having fought in three (1835, 1847 and 1850-53) of the nine Frontier Wars against land dispossession, Jongumsbomvu, as Chief Maqoma was known, became “the most renowned Xhosa leader of South Africa’s Cape-Xhosa Wars and arguably one of Africa’s greatest military leaders of the nineteenth century”. Various groups including the amaGqunukhwebe, the Khoikhoi and the San, imiDange and sometimes Fingos, waged successful battles against the colonists in the frontier. However, it is the leader of the Jingqi who stood out as a formidable enemy. This was apparent in the 6th Frontier in 1835 when he hid his forces in the deep forest of the Amatolas and launched guerrilla raids. This was to be perfected during what has come to be known as “Imfazwe yeZembe” in 1847 and mastered during longest and bloodiest frontier war “Imfazwe kaMlanjeni” from 1850- 1853. Moreover, both admirers and adversaries acknowledged Jongumsobomvu “to be a man of superior sense, talent, and integrity….who evinced the strongest disposition to make peace with the colony”.

Demonstrating this “gift of mind” and disposition to make peace, in 1838 Jongumsobomvu took Andrew Quinn, a settler to court for stealing his horse. This act forced Colonel Hare to hire Grahamstown lawyer Henry Selby to represent the Jingqi chief during the trial because it is highly probable that failure to do so would have jeopardized the terms of the treaty that ended the war in 1835. Jongumsobomvu rode to Grahamstown and remained there for the duration of the trial. Quinn was found guilty and ordered to pay the chief £35 in damages and £10 for the horse to the betterment of many settlers. The peace settlement that Stockenstroom worked hard for and some of whose terms were favourable to the chief was preserved. Time and again Jongumsobomvu placated the settlers, offering cattle and sending back cattles stolen from the settlers in order to keep peace.

Similarly, Tambo preached peace. Appearing before the fourth congress of Frelimo in April 1983, OR stated, “Comrades, one of the many visions which unite all our peoples is the vision of peace; peace so that we can grow food, peace so that we can study, peace so that we can build hospitals and schools instead of spending our resources on weapons of destruction and war”. Additionally, Tambo and his organization the African National Congress (ANC) became the leaders of the struggle against apartheid. In her autobiography, Oliver Tambo: Beyond the Engeli Mountains, social historian Luli Callinicos narrates a story in which OR Tambo shed a tear after the Organization of African Unity (OAU) tried to deny this fact by deciding to allocate more financial resources to the Pan Africanist Congress of Azania (PAC). Indeed, Tambo’s “Free Mandela Campaign” mobilized the whole world against apartheid. His call “Make apartheid unworkable. Make South Africa ungovernable. Prepare for the conditions for the seizure of power by the people” that has been widely quoted by commentators arguably consolidated the unity forged by the United Democratic Front (UDF) the previous year and led to the mass protests that brought Botha’s apartheid government to its knees by the late 80s.  Like Maqoma before him, Tambo’s intellectual abilities are well known. In his tribute former President Mbeki mentioned the ‘sharp  the apartheid government. His body and soul was invested in this pursuit.

Concluding his remarks during the opening day of the 14th OHASA annual conference asked delegates to investigate the “sociology” that enabled the Eastern Cape province to produce great leaders like OR Tambo, Mandela, Hani, Maqoma and others. Furthermore, he was disturbed by the fact that the province comes last in almost everything including the matric results. Yet it produced such great leaders. Moreover, he decried the reports of corruption in the public service characterised by officials whose “output far outweighed their input”.

The History Section of the Bayworld Museum has started a lecture series entitled “Ethical Leadership”. The objective of the series is to remind individuals, families and communities about the leadership traditions and values espoused by great leaders like Maqoma, Tambo, Mandela, Mini, Mhlaba, Mbeki, Ndodo, Biko, Hani, Sobukhwe and many others, in order to promote the legacies of these great giants and foster a culture of honesty, service, and anti- corruption.

Lindinxiwa Mahlasela works as a researcher of history at Bayworld Museum, Port Elizabeth.