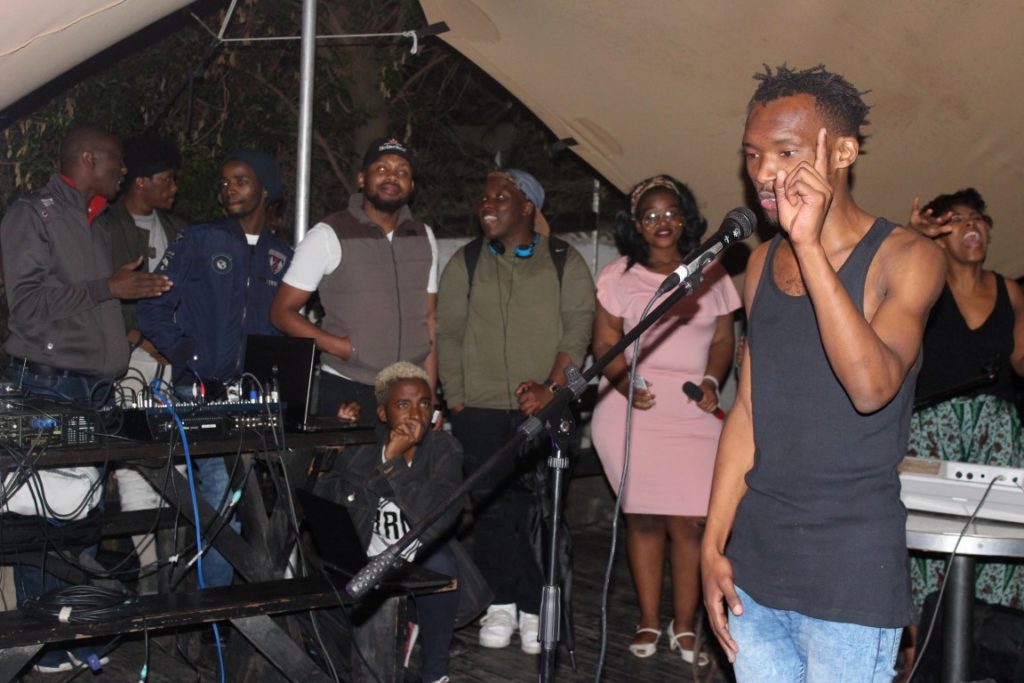 There was overwhelming enthusiasm among Rhodes University students for the SRC DayMare Ubuntu fundraising party last Saturday at 37 on New. Students who attended said they felt good about the fact that they were helping needy fellow students while having a good time. The mostly student audience paid an entry fee and artists – mostly students – performed for no fee.

The doors opened at 2pm and students thronged at the door, where most bought their tickets. Speaking ahead of the show, outgoing SRC President and co-organiser Rolihlahla Mabaso was optimistic.

“I am definitely expecting a large crowd – primarily because we’ve sold most of the pre-sold tickets and there are a lot of people coming in buying tickets at the door so that’s very exciting to see,” he said.

The brain behind the ‘DayMare’ concept, Freddy Seageng, who is also the Sports and Societies Councillor at the SRC, said the event was planned two months ago and despite the organisational challenges they faced (changing venues, getting sponsors and having little marketing time), it wase a success.

“I’m really happy with what we’ve achieved,” Seageng said, “the party was a different vibe to what that venue usually has, with the live band, artists and poetry – students enjoyed it.”

For most of the artists, DayMare was an opportunity to showcase their talent as well as doing some good for less fortunate students and they were happy to be part of it.

Band member Innocentia Sibi said she was honoured to be part of the event.

“As a student who comes from an underprivileged background, I know it’s not easy to go through university without financial assistance,” Sibi said, “so it’s very important that we celebrate these days and recognise what the Ubuntu fund is doing, in helping students.”

Another artist, Luvuyo Khatshaza AKA 14K, was also taken by the fundraising idea. “It’s a good initiative, which helps out students that are in need of assistance, from accommodation issues, fees and basic everyday necessities It’s always good to give back to those who are disadvantaged.”

There was however, some controversy over whether it was okay to serve alcohol, with some students arguing on RU social media platforms that it was wrong to use alcohol as a promotion strategy.

“Initially I was puzzled about the idea of it being a party, while it’s a fundraising cause,” said one of the students at the event. “Even when they were advertising drink specials, only alcohol was advertised. There was no juice special for people who don’t drink, like myself.”

“I know what it means being a needy kid – the struggles of being someone who is in need of R10 to buy bread and not knowing where your next meal is going to come from. So I just want to lend a helping hand because I personally feel this is something I can attach myself to. I know the struggles out there is real,” Cebo said.

Mabaso said they were happy about it. “I was impressed with the turnout, considering it was in the middle of the month,” he said.