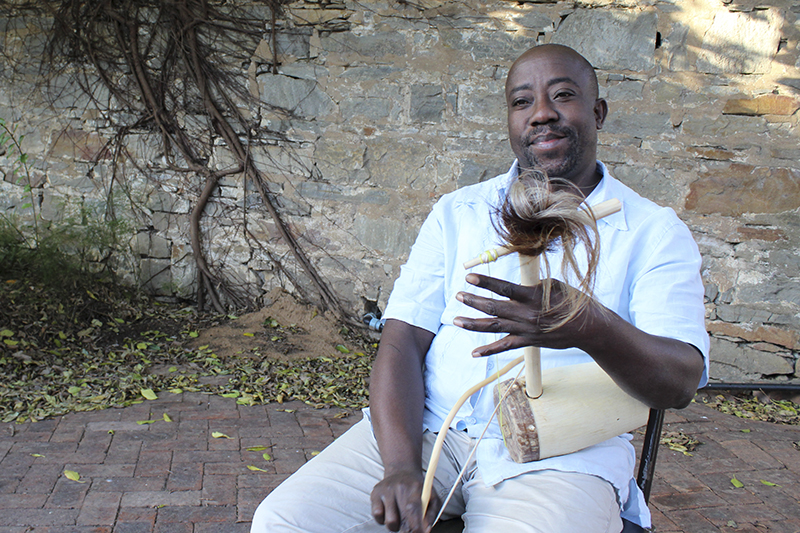 Albert Bisasa Ssempeke, musician from Kampala, Uganda, is being hosted by the International Library of African Music in Grahamstown for the next three months. Photo: Sue Maclennan

Do you love the music of Fela Kuti and Oliver Mtukudzi?

Over the next three months, Grahamstown musicians have the chance to learn to play music in the style of these famous musicians.

Ugandan performing artist Albert Bisaso Ssempeke is being hosted as a musician in residence by the International Library of African Music (ILAM) until the end of October and will be giving individual lessons on the Ugandan lyre, fiddle and flute, and group lessons on the amadinda marimba for up to eight people at a time.

At age 9 Ssempeke, who is a court musician, started making his own instruments using materials he found around him. He then started lessons with his father, the late Dr Albert Ssempeke, a world-renowned multi-instrumentalist, musician and teacher of traditional music.

Albert was the royal court musician of the former Kabaka (king) Muteesa the second of Buganda, and Bisaso has followed in his footsteps. Like his father before him, he is one of the few contemporary musicians with knowledge of the former music traditions of the Kingdom of Buganda.

Bisaso has since become an expert on Ugandan and Bugandan culture, dance and music, playing a variety of traditional Ugandan instruments. He plays with a variety of bands and musicians and travels internationally giving lectures, workshops and performances. He teaches courses in and around Kampala for adults and youth.

Among his musical influences, Bisaso names his father, as well as Everesto Muyinda, Temuteo Mukasa, Fela Kuti and Oliver Mtukudzi.

He has worked on musical collaborations with musicians from all over the world and in 2002 Andrew Tracey, the former Director of the international library of Africa Music, invited Bisaso and his father to present the royal court Music of the Kingdom of Buganda at the 17th symposium on Ethnomusicology at ILAM.

Other guest lecturer engagements include at the University of Vienna, Austria and Aghakan schools in 2008. In 2010 he was invited to give a presentation on Ugandan music at the Centre for Research in Chileka, Malawi.

Concert tours include the Summer Music Festival in Germany; touring with the Amadinda Quartet to Germany, Belgium, France, Netherlands, Austria, and the Czech Republic; a World Harp Congress in Sydney and a presentation at a symposium at the Royal Opera House in Muscat (Oman).

For two years, he has been running a music camp in his home village, Lutengo, where musicians and scholars from the University of Vienna come together for some weeks of playing music and studying new sounds from Uganda.

Over the next three months he will be performing in Grahamstown, Port Elizabeth and Cape Town, as well as launching a satellite music archive in Joburg as part of the repatriating recordings project, Singing Wells.
The archive, which will be based at the Windybrow Theatre in Hillbrow, includes Ugandan refugees and children.

ILAM Director Lee Watkins says Bisasa’s visit is an opportunity to strengthen a pan-African sensibility. “There is a growing awareness of how close we are to the rest of the continent,” Watkins said. “Bisasa’s visit here is part of our attempt to open up a space where we’re not just archiving people’s music, but we’re encouraging a reciprocal exchange.”

Apart from his personal performing instruments, Bisasa has brought a number of traditional instruments with him for teaching. Until the end of October, you can sign up for lessons on the amadinda (long xylophone), endigidi (one-stringed bowed lute), endongo (bow lyre), kadongo (lamelophone) or endere (flute). For details and bookings, email Liezl Visagie l.visagie@ru.ac.za or call her at 046 603 8557

Hear him talk about his music here: https://youtu.be/ICk1Sc_OuRc