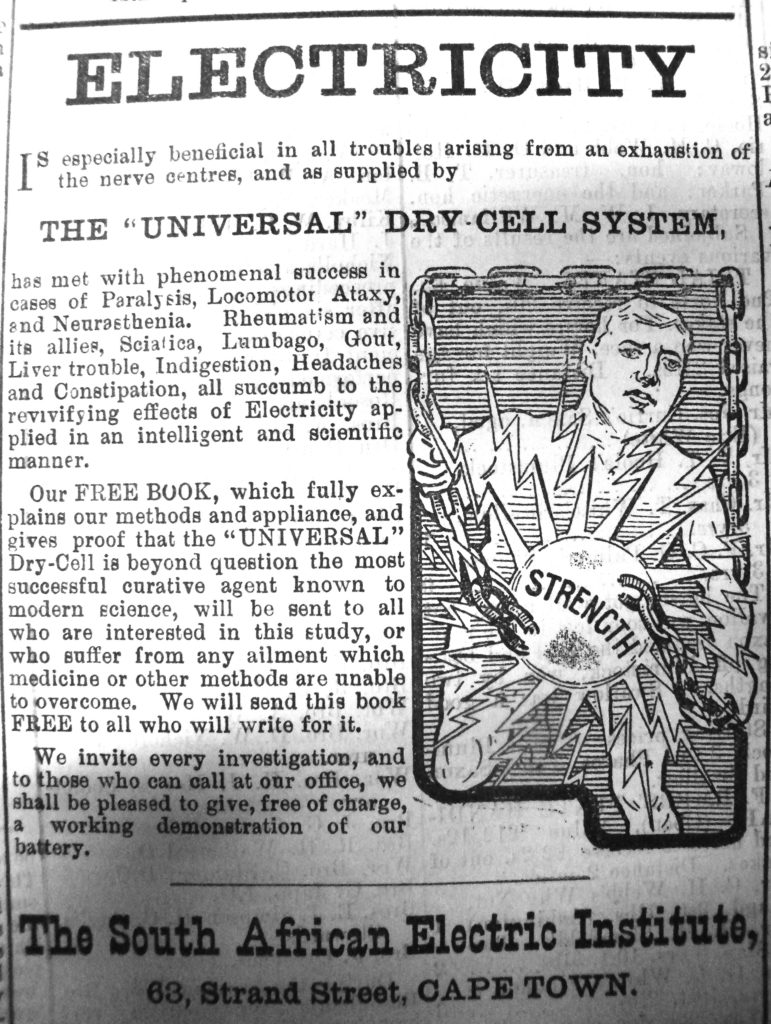 Forget exercise and a good diet, just hook yourself up to this battery instead! (This is actually a very bad idea, don’t do it!). Photo

The Inquest into the Death of a Birch’s Clerk

The inquest into the death of Solomon Ignatius Potgieter was held on Saturday 26 September 1908, only one day after Potgieter had been found dead on the premises of Lappan’s Hotel, Grahamstown.

Solomon Potgieter, a man in his late twenties, had been a clerk in the men’s department at Birch’s for four or five years. He seemed to be a man of sober, honest and upright habits.

Unmarried, he lived in a room at Lappan’s Hotel  (now the Hotel Victoria Mews, New Street), but had been seeing a Miss Elena Juby since June.

On the evening of Thursday 24 September, he had accompanied Miss Juby to the station to see a friend off on the train. Some Saint Andrew’s College boys were also on the platform, shouting goodbye to some friends of theirs who were leaving town, and when Miss Juby raised her voice to be heard, Potgieter snapped at her to shut up.

Miss Juby, irked, retorted “I tell you, I will never speak to you again.” Nevertheless, he walked her to her home on Matthew Street, said he’d never see her again, and went off.

JG Pattison, a friend of Potgieter, had been behind the couple on the way to the station but had lost sight of them because of the crowd of College boys. He met up with Potgieter near Matthew Street later on, and Potgieter, apparently in an excited state, told him that it was “all over” between him and Miss Juby.

He went back to Lappan’s with Potgieter, returning there at about 9pm. The hotel proprietor, CA Brereton, saw them come in, and Potgieter bought some stamps from him before going into the smoking room to write letters.

Between half-past nine and 10pm, one James McGill brought Potgieter a package from Miss Juby: she had returned a chain, watch and brooch he had given her. Later, Pattison went to the post office with Potgieter, and at the inquest testified that Potgieter had said, “This settles it,” when he posted the letter addressed to Miss Juby.

Pattison thought nothing of it, beyond that his friend was justifiably upset by the break-up. Pattison went home at midnight. A little later, Brereton, who was already in bed, heard someone go out and then come back into the hotel. At 12:30am on the morning of Friday 25 September, a billiards scorekeeper downstairs heard a shot, but thought nothing more of it.

A servant at the Hotel found Potgieter dead in the tack room at 7am the next morning. He had shot himself with a rifle. The letter he had sent to Miss Juby arrived at about the same time. He accused her of lying about loving him:  “It was worst thought of you to return the small presents…Would like you to understand that you are not the cause of this…I know that your love for me was a faked one, and too good to last. I am the same as ever but you said my love has grown cold.”

His death caught everyone by surprise. Brereton testified that although Potgieter was worried about his health and took medicine constantly, he seemed to be otherwise fine. His brother-in-law, WF Copeland, who had known him for ten years, stated that Potgieter had seemed to be completely normal earlier on the 24th. But he also said that Potgieter had nearly died of typhoid in 1907, and had never been the same since.

A colleague from Birch’s said that Potgieter had been a little quiet for the last few days, but he had put that down to being unusually busy at work. He added that he’d worked with Potgieter for about four years, and confirmed that since his bout of typhoid he had been easily upset in a way that he hadn’t been before.

Pattison, the last person to see Potgieter alive, said that he had been a man of generally good spirits. The coroner’s verdict was suicide.

Today, the World Health Organisation estimates that there are nearly 800 000 suicides every year. It is the leading cause of death among people between the ages of 15 and 29.

Russia, Japan, India and the Koreas have the world’s highest rates of suicide. In 2015, the South African suicide rate was between 10 and 14 per 100 000 members of the population – roughly the same as the US, Canada, Australia and New Zealand.

But there is a lot of evidence that suicide prevention strategies work really well. These include learning to identify and respond to signs of suicidal behaviour, identifying and treating depression and substance abuse problems, spreading awareness and finding ways to increase self-esteem. Solomon Potgieter probably would have appreciated someone he felt he could talk to about his feelings.