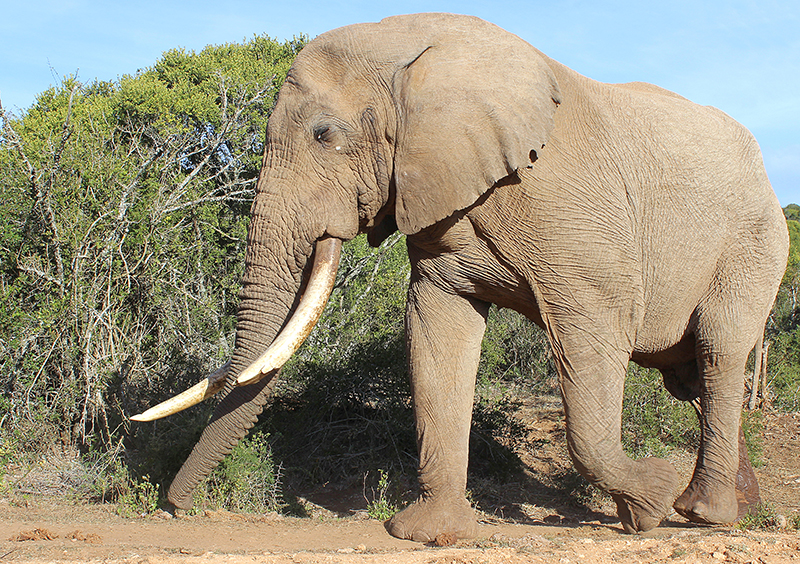 Most visitors to the Addo Elephant National Park (AENP) go there to see the jumbos – the park was originally proclaimed to protect these magnificent animals and has done so well at this that it is now arguably the best place in Africa to view elephants. On hot days, in particular, visitors can watch at close range while elephants visit waterholes in large herds, bathing and wallowing with youngsters in tow. The incredible success of the Park’s elephant conservation is a double-edged sword, however. While the elephant population has flourished, the vegetation has taken a beating. This is particularly evident near waterholes, and visitors to the park regularly ask what the park is doing to curb the damage.

And this turns out to be an even more important question than most visitors realise – the Sundays Spekboom Thicket (SST) that covers much of the park is a highly endangered vegetation type, with 98% of what is currently under protection occurring right here in the Park.

Herein lies a conservation conundrum – how on earth do we protect both elephants and this endemic vegetation type in the park?

Due to advances in ecological understanding, SANParks no longer follows a carrying capacity (or stocking rate) approach. This method was developed for agricultural purposes and, while useful for determining whether areas have adequate forage quantity and quality for various densities of livestock, it has no direct link with protecting biodiversity.

Elephants and other wildlife pick out preferred species and use the landscape for different activities in different areas, which vary over time depending on rainfall and other environmental factors. Depending on a stocking rate value alone therefore provides a false sense of security that biodiversity will be maintained if elephants are kept at a particular population size.

In addition, elephant impacts on vegetation can be both positive and negative. Although elephants are very messy feeders, often leaving a large proportion of what they’ve plucked on the ground, they are also recognised as important ecosystem engineers – they help to open up paths and wallows for other animals, cycle nutrients through their trampling, and disperse seeds in their dung, for example. So elephants also contribute to important ecosystem functions that enhance biodiversity.

Where does that leave us with our conservation conundrum?

Recognising that the elephants are important ecosystem engineers operating in systems that are complex and continually changing, SANParks has changed its approach to elephant management from trying to keep the populations at some stable “carrying capacity”, to focusing on how the actual impacts of these elephants are distributed across the landscape. After all, it is the impacts of elephants, rather than the elephants themselves, that concern us.

However, rather than aiming to spread moderate impacts evenly across the landscape, contemporary ecological understanding advocates for patchily distributed impacts that allow certain areas to escape elephant impacts, or to allow the vegetation in other areas time to recover between bouts of elephant feeding.

The basis of this approach is for conservation managers to try and maintain, or where this is not possible, to restore or mimic the natural environmental cues that regulate where elephants use the landscape or the growth of elephant populations.

Because elephants need to drink water every day, they tend to spend a lot of time near to sources of surface water such as rivers, dams or boreholes

For example, because elephants need to drink water every day, they tend to spend a lot of time near to sources of surface water such as rivers, dams or boreholes. Consequently, with the recent addition of the Colchester section on the southern end of the park, water sources were limited in this section.

This mimics the higher availability of water along the Sundays River that would have been used by elephants historically along the north western boundary of the Main Camp area, which now has the highest density of artificial water sources. Evidence from collared elephants over the past four years has shown that elephants indeed spend more of their time in this northern section of the park, with much less feeding occurring in the southern Colchester section. This section is also home to some of the most intact Sundays Spekboom Thicket to be found anywhere. A large fenced-off exclosure ensures that some of the rarer endemic thicket species are not cherry-picked by elephants wandering into the southern area.

Even where immuno-contraception is administered to the smaller population of elephants in the Nyathi section of the park, the focus is not simply to slow down their population growth, but rather to mimic the way that fewer lactating or pregnant elephants might use the landscape due to their increased resource requirements.

This approach of mimicking natural ecological processes is a central theme of SANParks’s management of wildlife, extending to other species, including predators. For example, lions in the smaller parks are managed as a “metapopulation”, mimicking coalition takeovers by swapping out males between parks and administering contraception to lionesses to mimic the longer intervals between births in bigger systems.

All in all, this new approach to management is a humble recognition that nature, rather than man, knows best.

Previous ArticleKNOW THE SCORE
Next Article Faith and practice