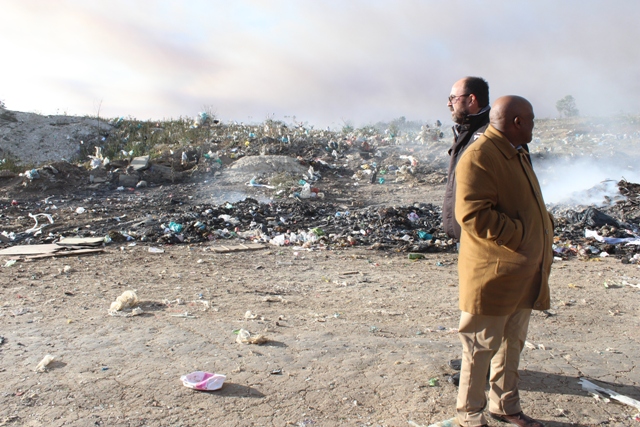 Arguments in Court A on Thursday 8 June, weighed the seriousness for the individuals of possible conviction, against the serious effects on citizens of Makana Municipality’s alleged failure to improve the state of the landfill site.

The case was heard on Thursday 8 June, as the city was filled with smoke from the municipal dump, which had been burning since the previous evening.

Advocate Torquil Paterson for Nomhle Gaga and Riana Meiring, whom the applicants say should be criminally convicted and sentenced to jail, pointed out the serious consequences of such a result for the two officials and pointed to their former legal counsel for poor communication and failing to give the matter the appropriate attention.

He said Meiring had sought to comply with the order, obtaining R1.6 million to effect the changes at the dump, and had spent R1.2m in seeking to comply.

The respondents were not present in court.

Advocate Izak Smuts for applicants, the Makana Unity League, argued that the court order had been brought on behalf of a 300 thousand-strong community, whose health and safety were seriously affected by lack of control at the landfill site.

“Failure to protect citizens lies at the door of the Mayor and acting municipal manager,” Smuts argued.

The court order specifying certain actions to be taken to improve safety and management at the landfill site was served on Gaga and Meiring in October 2015 and again in January 2016, according to court documents.

Application for contempt papers were served on them (in their official capacities) on 20 February this year.

According to court documents, a compliance notice was issued to the municipality in March 2015 in terms of the National Environmental Management Act and a court order demanding specific actions was served on Gaga and Meiring in September and October 2015.

In June 2016 a letter was addressed to Makana’s attorneys noting non-compliance, accompanied by photographic evidence.

This was followed by further letters from Wheeldon, Rushmere and Cole in October 2016 and January 2017 (following the destruction by a fire that spread from the dump of stables at the Grahamstown Riding Club).

They argue in papers that failure to comply with the terms of the order has the result of “ongoing threats to the health of the citizens of Grahamstown and to the environment”.

The acting municipal manager is currently Mandisi Planga, who in his official capacity now faces the charge of contempt of court.