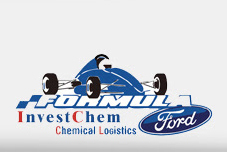 The race weekend in East London for the Formula 1600 field started with the championship leader, Julian van der Watt (42 – Race Driver SA), at the top of the timesheets in every practice. Then during the qualifying session Brad Beningfield (46 – General Energy Systems) suddenly stepped into the picture.

Rhodes University second year Journ student, Beningfield had been progressing through the practice sessions from fourth place to second and then during qualifying went 0.006 of a second quicker than the series leader to take pole position for race one.

The first race was 10 laps and the Investchem Formula 1600 field spent those laps fighting for position and trying to get past the racer ahead, while defending their spot against any challengers. It was Van der Watt that claimed the first chequered flag, having found his way past Beningfield who slipped to second.

In race two, O’Connor wasn’t having any more of this overtaking business and finished in second spot, behind Van der Watt, with Beningfield in third place across the finish line.

This mixed set of results is going to make the championship that little bit more interesting in the run-up to round four at Zwartkops Raceway.

The next race meeting for the Investchem Formula 1600 championship is at Zwartkops Raceway on June 16, with the running of the fourth round of the Extreme Festival.