Celebrating the crossword that says what it means 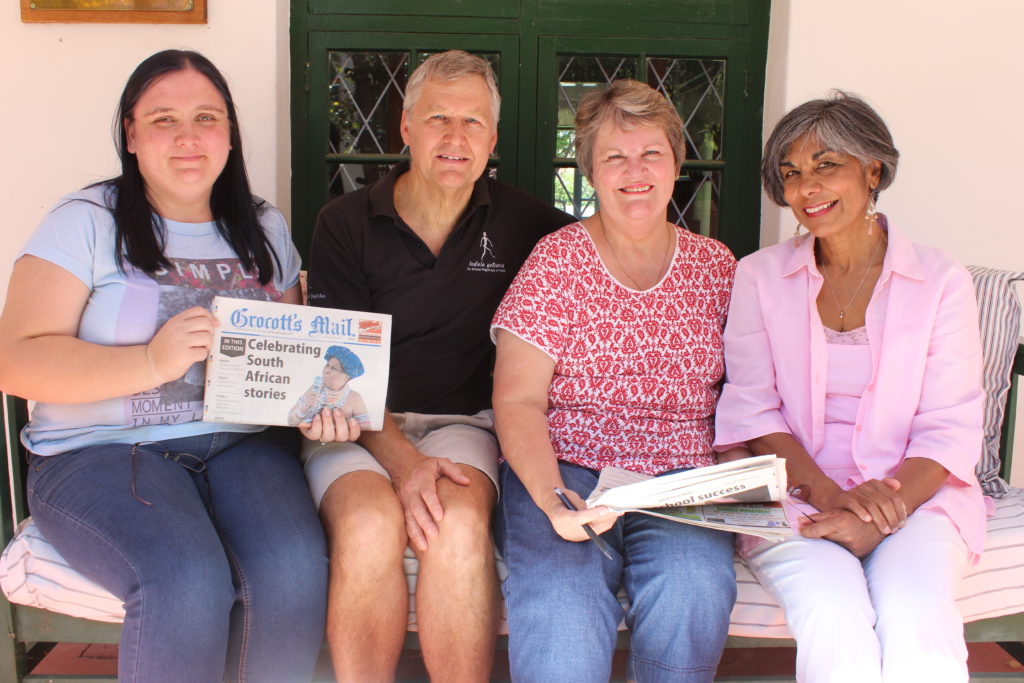 Crossword solvers Bev Fourie and Leela Pienaar are preparing their revenge on compiler George Euvrard, a former dean of education at Rhodes University.

“We’re compiling a crossword for George to complete… and it’s not going to be a pushover!” Pienaar said.

The South African Cryptic Crossword, a first as far as is known, which began in August 2015, is Euvrard’s latest enterprise for people to expand their minds and terms of reference.

The qualified counselling psychologist is the co-founder of the Polar Plunge – Grahamstown’s mid-winter swim across Grey Dam. He is the founder of the Indlela yoBuntu pilgrimage from Grahamstown to Cape Town.

“I’d been looking at the crosswords published in papers across the country and I noticed that all of them were syndicated from England,” Euvrard said.

There was once exception.But although Finweek’s Jack Dunwoody lives in South Africa, all the clues and references were decidedly English.

In an as yet unpublished academic article titled ‘South Africanising the English Cryptic Crossword’, Euvrard describes the world view of the genre as London-Etonian-Conservative-chauvinist-colonial-centric.

So in Grocott’s Mail, he made “a total shift”. He attempted to South Africanise the traditional English crossword in terms of language, history, geography and culture.

As a psychologist he ties this in with a sense of identity, as defined by 20th century psychologist Abraham Maslow.

“How can we gain a sense of who we are and what we believe, and develop a deep trust in this, when we constantly look at the world, at life, and indeed at ourselves, through others’ – often strangers’ – eyes and ears?” Euvrard writes, explaining why it’s a struggle for people to find their core selves.

Back to tea here in Grahamstown and while they’re aware of the philosophy behind the South African Cryptic Crossword, frankly, Fourie and Pienaar and Fourie do it because they enjoy the challenge.

She and Pienaar SMS each other when they hit a brick wall in solving George’s crosswords.

“For example, he’ll use ‘phata-phata’ – which is a variant of pata-pata.

“But we’re on the alert to variants now.”

And that’s the team’s first tip

“If you’ve got a gut feeling that you have the right word, but it doesn’t quite fit, then look up the spelling variant,” Pienaar says.

“There are challenges all the way. I often have to decide how far I push the language. But basically anything in the Dictionary of South African English is kosher,” Euvrard says. That’s tip number two.

Every now and again there’s a word he’d love to use.
“Like krakra (gaga, as in unpleasant). It’s such a great South African word, but it’s not in the dictionary.”

The first cryptic crossword appeared in the New York World in 1913, Euvrard says. Since then they’ve been a quintessentially British preoccupation.

By making the crossword South African, Euvrard argues in his article, he seeks to “‘move the centre’ from British-centrism to South Afrocentrism”.

“We have such lovely words that are part of our culture and history,” Euvrard says. “My challenge is how do I maintain the form, but at the same time make it South Africanised.”

Some examples of Euvrard’s cryptic clues in his puzzles published in Grocott’s Mail over the years include:
●      Tutu finds himself in some confusion (7)
Explanation: Tutu = the arch, is inside some/any, giving ANARCHY which is confusion
●      Joint leaders of East London give a curtsy (5)
Explanation: leaders of East London = EL, plus curtsy = bow, gives ELBOW which is a joint
And
●      Greetings South Africa! Wake up before our National Anthem starts (8)
Explanation: South Africa = SA, + Wake Up Before Our National Anthem i.e. starts of these words, giving SAWUBONA which is a form of greeting.

Devious minds?
“More like a playful mind,” Pienaar says. “You need to be a lateral thinker – happy to play with words and be adventurous.”
Euvrard says, “A cryptic crossword says what it means, but it doesn’t mean what it says.”

“Yes, you’ve got to get into the mind of the compiler,” Fourie says.

She’s had plenty of practice. “I was an only child,” Fourie recounts. “I used to read a lot on long, boring Sunday afternoons, and I used to do all the puzzles in the papers.”

“The solution is always logical,” says Pienaar, a former teacher. “But you’ve got to be prepared to think out of the box to find it.”
A cryptic crossword solution comprises a definition, and the wordplay that helps you find the word.

“It will be a similar word – something that’s a synonym but send you along another track,” Euvrard explains.

“So I’ll play with that other track in the wordplay. “The biggest challenge is to provide a clue that makes perfect sense. They’re so often gibberish and the challenge I set myself is to write a clue that is elegant and succinct.

“Sometimes it take me 20 seconds to come up with the clue. Sometimes I’ll sukkel for half an hour.”
So it’s a bit like poetry?

“Very much like poetry. You have three concepts, and you need to work out how to put them into a sentence that flows and beguiles.”

Only in that you can never jump a step.

“That’s the crux of writing – whether it’s a thesis or a crossword. It’s more logic than maths.”

Euvrard has a family of crossword enthusiasts and connoisseurs, and sends every one he compiles to them for feedback.
“They tell me exactly what they think.”

How George does it
First I devise the grid and decided what configuration to use. I have a computer programme that provides templates  – longer and shorter.

For this edition, the 75th, I compiled my own.

Then I populate it – I fill in words. I have dozens of tabs open on my computer when I do it: the Dictionary of South African English, a site of South Africanisms, a record of the words I’ve used, and more.

I’ll make sure there are at least four or five of these, and then I’ll fill in the rest of the grid with the help of the Chambers Crossword Dictionary.

Tips from the team
* Look out for anagrams and run-ons – “sounds-like” clues. Be open to vocal clues.
* Be open to the likelihood that a word might not even be in English.
* Some words actually go backwards.
* Always wonder why a capital letter is where it is. Often they’re there to confuse you, but often it’s part of the clue.
* Often the answer is a noun – but it’s used as a verb in the sentence.
* Whereas the Times crossword will only use names of people who have died, the South African Crossword has featured Jomo Sono, Moshoeshoe and Doctor Khumalo among others.
* And just because one day you might need to know this… crossword compilers and solvers are known as cruciverbalists.