VG and Graeme present The Sound of Music 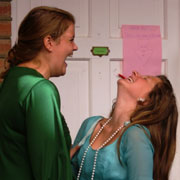 “This casting approach has been great, but tough for rehearsals because we’ve had to rehearse everything three times,” explained director Nicci Hayes about the unusual method.

The full dress rehearsal was a musical treat: the nuns’ lamenting the problem of Maria, and Rolfe gently teasing Liesl about her age were particular highlights.

Lukhanyiso Damana’s voice is made for theatre; no dramatics, no unnecessary showboating, just pure storytelling as he sings to Sisanda Ncetani’s Liesl von Trapp.

Sibu Mkhize is VG choir's conductor and his talent comes to the fore when he conducts the nuns in song: the voices of Sinesipho, Avela, Leticia, Sesethu, Tero and many others, combine to form a finely-tuned vocal instrument.

“Rehearsals are fun but stressful,” said Mpoposhe. One thing she learnt about the theatre is that “you cannot chew bubble-gum while acting.”

GALLERY: Click here to sneak a
peek at our gallery!

“I love theatre, it’s all worth it, but it’s hard,” said Lang, who will be playing Sister Maria on the first Friday night. She said she learnt that, in theatre, it pays to learn your lines as soon as possible. “The more you carry the script around, the more attached you become to it,” she said.

Baroness Elsa Schrader, played by 15-year-old Chloé Finlay, is performed impressively and maturely. Finlay said she thoroughly enjoys acting and getting helpful tips from the director: “Every rehearsal is a chance to improve my character, even though there were some late nights and lots of homework to do,” says Finlay. “My character’s quite sophisticated, so I had to find a balance between being loud whilst remaining elegant.”

Grade 11 student, Sisanda Ncetani, plays Liesl von Trapp. Ncetani found rehearsals to be more fun than stressful, “but I did have to practise a lot because of the solos that I sing,” she said.

Ncetani’s new theatre knowledge included the fact that glass props, like the brandy bottle and glasses in the von Trapp living room, are not allowed on stage for safety reasons.

Hayes said he admired Mkhize’s choice of The Sound of Music because “it has good female roles. And it’s a love story and protest against Nazism. In South Africa we want to keep celebrating protest against unjust regimes,” said Hayes.

The Sound of Music will be playing on Thursday 6 March, Friday 7 March, and Friday 14 March. All shows start at 6.30pm.