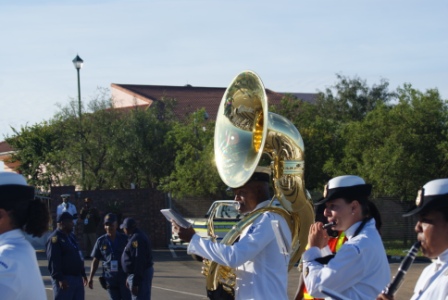 ANC Chief Whip in the Makana Council, Julia Wells, was among the VIP guests from all over South Africa who arrived at the Qunu homestead of former South African president Nelson Mandela this morning.

ANC Chief Whip in the Makana Council, Julia Wells, was among the VIP guests from all over South Africa who arrived at the Qunu homestead of former South African president Nelson Mandela this morning.

Mourners arrived in their numbers this morning for Mandela’s funeral which started around 8am, while members of the army and air force, in full regalia, formed a guard of honour in front of the Mandela compound.

Wells acknowledged the Grocott’s Mail team, greeting them as she entered the compound.

There were also ordinary citizens who travelled long distances to be there, determined to be part of the proceedings – even if only from the outside.

Grocott’s Mail met up with a family that had travelled all the way from the Northern Cape and shared a special bond with Madiba.

"We left home on Thursday and we just wanted to be here in front of Tata’s home. We arrived here in Qunu this morning (Sunday) and this is a big day for us as a family,” said Marika Grootboom.

She attended the funeral with her husband Derrick and two daughters, Babalwa and Lungiswa.

Derrick said he had grown up admiring Mandela’s humble spirit and the fact that he was willing to fight for the freedom of his people.

He also had a very special reason for identifying with Madiba and respecting his endurance in prison.

“I was detained on Robben Island for seven years and I was only 17 years old then. This day is very important to us as a family,” he said.

Uniformed military personnel and ordinary people made up a crowd of hundreds outside the Mandela home that swelled as VIP mourners arrived in buses.

Around 50 buses were parked near the Mandela homestead. Soldiers were stationed all around the homestead and media were prevented from taking photos of the funeral procession or the burial site.

Previous ArticleNo hitches as VIPs stream through EL airport
Next Article Makana Enviro-News: Let’s move from the bottom in 2014