All roads lead to K-Day 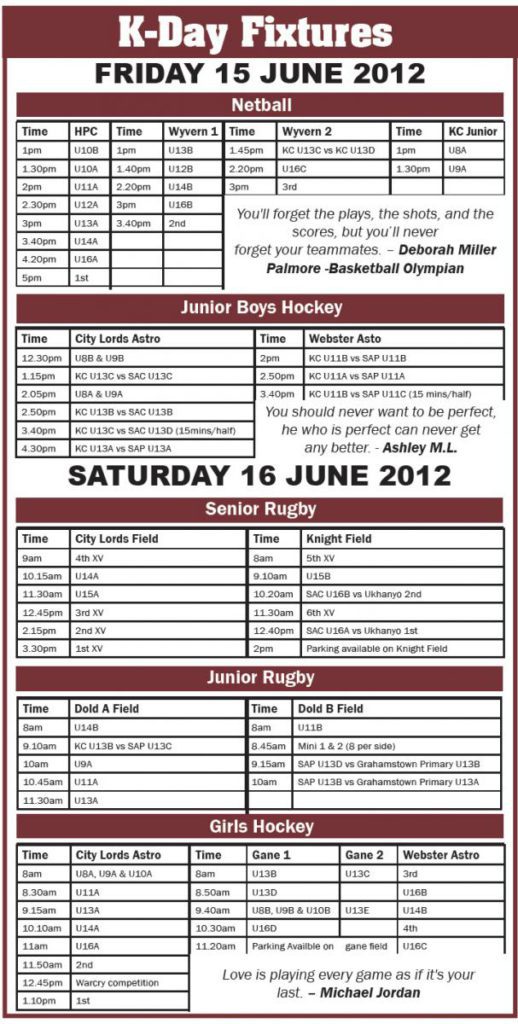 Known as K-Day, family, friends and old boys and girls from the three schools come from across the country to support the events that make up the magnificent sporting weekend.

Kingswood is expecting an especially strong contingent of old boys and girls, because this is also the school's reunion weekend. A number of activities are planned for them and while many will return to the sports fields, it will be not as participants but as spectators.

While the sporting action began on Wednesday, games continue today and tomorrow, culminating in the first-team rugby clash.

The senior boys' hockey games took place at Kingswood on Wednesday. Also taking place today are the netball matches, starting with the U10B at 1pm at the Kingswood High Performance Centre (HPC).

Netball matches continue at the HPC, Wyvern and Kingswood Junior courts, ending with the firsts at 5pm in the HPC. Tomorrow's action starts as early as 8am with the U14B and U11B rugby taking place on Kingswood Dold Fields.

The girls' hockey also starts at 8am, with the U8As, U9As and U10As playing on City Lords Astro. Other hockey matches will take place on the Kingswood Gane and St Andrew's Webster fields throughout the morning, ending with the girls' first-team clash at 1.10pm on City Lords.

The rugby action continues on City Lords Field from 9am, with the 4ths starting off at 9am. The much anticipated first-team rugby clash takes place on City Lords field at 3.30pm.

While thousands of supporters and spectators will flock to City Lords for this match, both schools have made it clear that K-Day is for all the pupils and is not just about the first-team rugby match.

All pupils at both schools have been encouraged to take part in the week's activities, whether taking part in one of the sporting codes or assisting with first aid or other duties. Good luck to everyone involved from both sides and may sport be the winner of the day.