A shadow on the light at the end of the tunnel 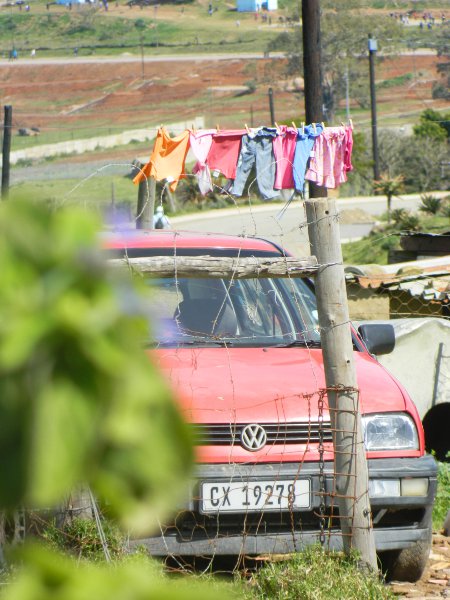 The weather wasn’t cooperating with Madoda Nako. Last Friday morning when I found him at his mud house in Phaphamani informal settlement, he was seated on a kitchen chair, dejected, his eyes bloodshot after drinking the best part of a bottle of cheap wine – the remnants of which were in front of him. Behind him lay a heap of dirty dishes. His back was to the wall, facing the door so he could see the Eskom electricians he expected to arrive anytime soon to begin installing electricity cables inside his house. But the wind was singing an angry tune outside, with dark clouds threatening to unleash rain that could last the whole day. A bad sign for Nako: he could have been out working in someone else’s garden, or lending a hand at a construction site, so he could put food on the table later. Throughout our talk, Nako kept looking towards the dusty walkway in front of his house. I remained standing as we talked, as did Geraldine Kent, a Rhodes University journalism student who'd tagged along on my morning visit to the informal settlement as part of a multimedia assignment. You couldn't even fit three cows in Nako’s small dining room – separated from the bedroom only by a threadbare curtain. Much of the space is taken up by a kitchen table, a couch on which two other men are sprawled, a counter for holding buckets of water, dishes, a paraffin stove and other utensils. “How do you feel about electricity finally being installed in Phaphamani?” I asked Nako. He looked up at me, away from the door, and said, “I’m thankful. We’ve always been using paraffin to do cooking. Life will be better.” “Do you have a job?” “No.” “Will you be able to buy electricity, then, if you don’t work?” “We asked for it. When we protested, we said we want electricity in Phaphamani, so I’ll have to find ways. I do piece jobs every now and then.” I then asked Nako what else he’d like his community to be provided with. “What we really want are RDP houses,” he told me. Before Nako's, I had visited two other homes – mud houses, where the residents sang a similar tune. “So they’re installing electricity now,” said Welekazi Fanki, “but what happens when a wall in my mud house collapses? Will the municipality keep sending electricians to fix damaged cables after it rains?” But my talks with the residents always ended up being about the new arrivals and the problems they’ve brought to Phaphamani. “There are more houses now than when we protested,” said another resident, who didn’t want her name published. “The new houses were built only yesterday but some already have electricity cables connected to their walls. "Those who have lived here for longer should be served first, then the new people afterwards.” But those who’ve recently settled in Phaphamani deny that it’s the availability of electricity that drew them here. They say it was complicated where they lived before, that there were too many relatives living in the same house, or that they'd been evicted from the farms they lived on – but definitely not because of electricity. But long-time Phaphamani residents remain suspicious of the new arrivals. It's rumoured that one man in particular, who lives in the more-developed Phumlani township nearby, is planning to relocate to Phaphamani and build a tavern. “That man was not allowed to open a tavern where he lives,” said a resident, “so why would he come and do that here?” It's hard to share, when you're not sure you've even got enough for yourself.