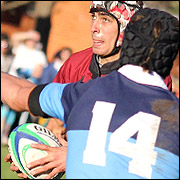 RUGBY:
It was a beautiful afternoon at St Andrew’s College on Saturday the 18th of June where Kingswood College met St Andrew’s College in one of Eastern Cape’s classic derby games.  Both sides started with fire in their bellies and it was evident from the first 10 minutes that it was going to be a titanic battle.

St Andrew’s had the upper hand until 10 minutes before halftime when they led the visitors by 17-6 with tries scored by Anthony Everard and Peter Lever, however, Kingswood took a quick tap penalty and Nigel Namayumba scored in the left-hand corner taking the score to 17-11.  With a minute to go in the first half St Andrew’s did not find touch from the scrum and Kingswood countered, scoring in the right hand corner  through captain Ruru Msutu and this allowed them to take a one point lead into halftime.

In the second half St Andrew’s got into the Kingswood 22 area and were pressurising the line, the Kingswood pack defended for their lives and kept the St Andrew’s side out for a long period of time before Ian Herold went over the line for the men in blue to take a 4 point lead.  Kingswood did not give up and kept the ball alive stretching their opponents side across the park until a very good break and offload in the tackle put the left wing into space behind the advantage line and Kingswood took a 1 point lead as they scored their third try of the afternoon and the second by Nigel Namayumba.

There were ten minutes left and Kingswood pinned St Andrew’s back in their own half with some effective tactical kicking.  Time marched on and with three minutes to go St Andrew’s moved the ball across the field and put their 8th man Stuart Stopforth into space out wide, he offloaded to Kankowski who was high tackled in the corner.

A penalty was awarded five metres out from the Kingswood try line and they decided to have a go for the line.  A tap penalty was taken and St Andrew’s went for the five points, a number of phases took place but the Kingswood defence held them off and forced a knock on, thus turning over possession.  Kingswood won their scrum and put the ball out to end and extended unbeaten run by St Andrew’s College amidst joyous scenes from the many Kingswood supporters.

All thirty players must be commended for the manner in which the game was played and the conduct they all showed both on and off the field.  It was a reminder of the beauty of schoolboy rugby and everyone looks forward to another battle royale in 2012.

It was another typical K-Day hockey match where neither team was willing to give an inch. The first half saw both teams building up play patiently but nobody really had great goal-scoring chances until Kingswood were awarded the only Penalty Corner of the half.

Mziyanda Mangi saw his flick go agonizingly close, past the left hand post. Neither side was able to create goal-scoring opportunities, as both teams proved to be solid in defence. For St Andrews, a few attacks came from their midfield, with Charles Bowren, Matthew Frew and Paul Selwyn-Smith playing well.

Half way through the 1st half Richard Rubidge had a terrific run into the Kingswood circle, only to see his pass narrowly evade Alan Gerber’s stick.

As the game progressed the Kingswood side started to take control the tempo of the game. Ruru Msutu and Connor Thorp were magnificent for Kingswood as they seemed to starve St Andrews of the ball. This continued into the second half with the St Andrewsdefence struggling to get the ball out of their own half, through good closing down by the Kingswood strikers.

St Andrews managed to get themselves back in the game with some great defensive work by Paul Selwyn-Smith and Chris Bailey. The 2nd half saw both teams defending with discipline and control and the midfield battle was evenly contested.

St Andrews had a good spell with Matthew Frew coming close with a shot from the edge of the circle. The best chance of match was a great break from Kingswood’s captain, Mziyanda Mangi, which ended up with a one-on-one tussle with the goalkeeper, Richard Crow, at the top of the circle.

He opted for the shot, which was well saved. The final few minutes were nail-biting as St Andrews defence desperately held on, as Kingswood piled on the pressure and were awarded three Penalty Corners. None of these were converted, largely thanks to some good goal-keeping from Richard Crow.

As usual, it was an enthralling encounter and finished with the honours shared at 0-0.

Hockey took place on Saturday 18 June and there were a large number of people that come out to support this local derby day match. The hockey saw some close and exciting matches taking place throughout the morning.

The U13A team have not suffered a defeat in the regular season this year and were determined to not let it happen in this game. The DSG started brightly and scored 2 goals within the first half through Georgia Yakas and Ongezwa Pinini. This lead was maintained after a superb save by Avene Jongile, which proved to be the last time Kingswood would threaten the DSG goal.

The final 10 min of the second half saw sustained pressure on the Kingswood goal from DSG, which saw 5 consecutive short corners go begging, but the Kingswood defence held up well during these short corners. While there were ample opportunities for DSG to strengthen the lead, it was the back four who made sure that the missed chances did not cost us, allowing just a handful of “D” entries which resulted in neither a short corner nor a shot on goal. The game finished 2-0 to DSG.

The 1st team match was close from the get-go with both teams having scoring opportunities. Kingswood had the better of the 1st half and went 1-0 up in the 15th minute through a goal by Shannon Arnold. DSG was determined not to give up and came out guns blazing in the 2nd half to score the equalizer through Jenna Scheepers off a rebound shot.

They continued to put pressure on Kingswood, but were unable to find a 2nd goal. The 1st team match came down to a nail-biting finish with Kingswood being awarded a short corner on the final whistle. The DSG defence held up and the game finished in a 1-1 draw.

Well done to all the sports women and to the coaches on an exciting 2 days of sport and for the sportsmanship on and off the field and courts.

Netball matches took place on Friday 17 June on the DSG courts. There was lots of excitement and support throughout the afternoon along with some good and competitive netball. The junior school spirit was remarkable and they showed their character and skills on the court. The 1st team netball game was competitive with DSG taking an early lead. The shooting ability of the DSG girls proved unstoppable. Kingswood maintained their fighting spirit but it was DSG who came out on top winning 36-18