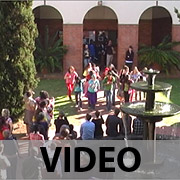 The Rhodes University fountain quad was abuzz with activity on Thursday morning when a spontaneous flash mob, inspired by the hit TV series Glee, broke into synchronised dance.

The Rhodes University fountain quad was abuzz with activity on Thursday morning when a spontaneous flash mob, inspired by the hit TV series Glee, broke into synchronised dance.

The 15-strong group enthralled crowds with high energy dance and complex physical manouvers backed by music that set the crowd in a party mood. Just as suddenly as the dance had began, the flash mob dissipated into the crowds filling the quad, accompanied by loud and enthusiastic applause.

The flash mob, in support of the Lesbian, Gay, Bisexual and Transgender (LGBT) Week that is currently underway at Rhodes University, created a fun and vibrant atmosphere for participants on the day.

Prof Marius Vermaak, Dean of the International Office and Philosophy Department at Rhodes University wondered out loud: “Why don’t we do this every tea time?”

The flash mob had been coordinated by students and staff members alike who used Facebook to attract interest for the “Glee Flash Mob” group. The group, founded out of the desire for fun activities that encourage self expression, may yet become a popular occurrence on and around campus.

Lara van Lelyveldt, the brain child behind the idea and Brittany Yelverton and Jill Moeller, both students, were all interviewed after the flash mob dispersed.

Yelverton described the intent of the flash mob as not just supporting the LGBT Week, but rather existing to provide a fun form of expression. She says “we create our own fun” and hints that the addition of the “Glee Flash Mob” to the Rhodes campus may not be a once off. As van Leyleveld puts it “those details are undercover”, creating an element of mystery around future flash mob activities at Rhodes.